Point/CounterPoint: Will Justin Bogle Win a SX Race this Season? 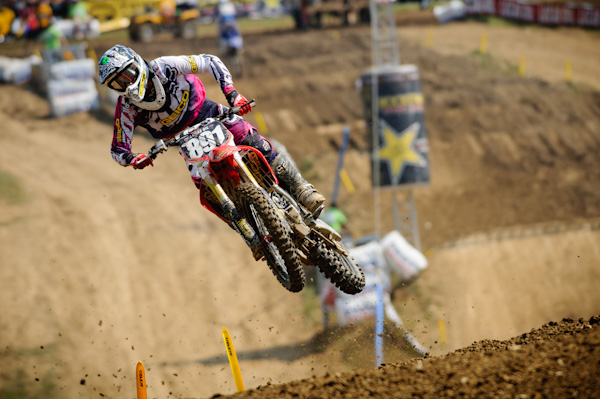 Swizzle- Wait, so you’re telling me we’ve got another JB AND he’s also on a Geico Honda? Just another reason for Bam Bam to stick I say.

Justin Bogle is a bit of an enigma to me at this point. All the talk points to him being uber-legit in Supercross right off the bat, even claims of wins in his rookie season. Bold. All I know of him is he was an amateur ripper, is in a boy band with Trey and Top Jimmy, always smiling, has a care-free, magnetic personality and has a voice that guarantee’s him a date any night of the week. Luther Vandross was intimidated by this “JB’s” voice.

He looked very impressive in his limited appearance in the outdoors of 2011 but that is a very different stage than the one he will be on for the next 8 weeks. All these young guys have migrated to a view of Supercross being the elite series where guys generally around my age and older still have a hard time accepting that. Putting the winter series up on that pedestal intrinsically brings with it more pressure. I’m curious if this Bogle character even knows what pressure is, he seems as cool, calm and collected as they come. I have the odds on my side though and they say captain891 is fighting an uphill battle in his rookie year.

While I am siding with the odds, just looking at all the mojo and charisma this Bogle character has going for him, I’m sure he’ll make me look silly and pull the W at round one. It’s just how it works with these guys who have that “IT”. Looks, voice, skills and charisma to spare. They make life look so easy and just dominate every aspect. Bogle is the epitome of that buzz-term of the day that I cannot stand but I’ll throw it out this one time only; Bogle is a straight-Boss and I fully expect him to make me look an employee who just got the axe with no pension or 401K.

Matthes- Oh Swizzle, it’s cute when you think you know what’s going on in the motocross world. How could you not think that Bogle will capture a win this year? Look at his background as one of the top amateur riders as well as how good he ran at the nationals where he wasn’t sick. He’s a very fast kid and I say kid because that’s one of the reasons why he’s going to win. He doesn’t know what he doesn’t know. He’s not going to be intimidated by Justin Barcia and that fancy number one plate or Blake Baggett and his steely-eyed glare.

Nope, Bogle’s on a great bike and team and he can watch himself off of Barcia to see where he’s at because guess what, and I’m sure even you’ll agree on this, Barcia’s going to be one of top guys in the class. Just look at Trey Canard and his incredible debut where he reeled off, I think, four straight wins. Trey’s from Oklahoma as is Bogle. Trey rode for the GEICO team and so does Bogle. Bing-bango baby- I win.

Swizzle- Hold on one second I’m ordering a pizza from previous amateur phenom Ben Riddle-oooohhhhh.  You see where I’m coming from. I’ll give it to you though, I agree that Bogle has everything going for him. In fact I spent more time back pedaling in my opening stance than Watson does when RV calls during a show. Captain891’s skill set is going to be his only friend out there and the forces opposing him are fierce.

One thing we know about Bogle’s teammate, defending champ and obvious series favorite is when it comes time to battle, he goes for the kill. Bogle may have all that and a bag of chips going for him but the Geico SX2 team is Barcia’s. He’s the alpha-male and he’ll be damned if a rookie is going to come in and steal his red background. Team-mate or not.

The east coast SX series is about to kick-off and I say a Bogle win is bogus due more to the opposing forces than his stellar skill set.

Matthes- Bogle’s not going to win the title but he’s going to win a race. Yes, I just said that. How can I be so sure? Because Trey Canard told me so. That’s good enough for me and I just have one thing to say to you Swizzle