This week’s selection from Greg Primm’s Classic Steel is the Ferrari of eighties thumpers, the ground pounding 1989 ATK 604E. 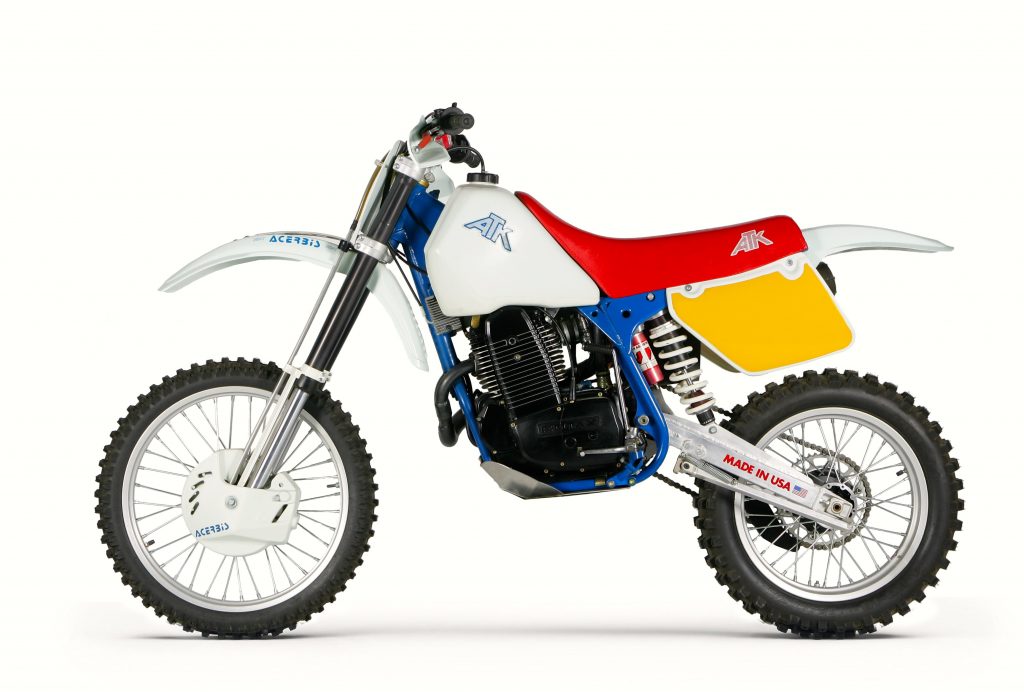 In 1989, this was one of coolest motocross machines money could buy. The ATK 604E combined earth-shaking power with class-leading handling and suspension. It was an unbeatable package for the lucky few that could lay their hands on these ultra-exclusive machines. Photo Credit: Stephan LeGrand

ATK was founded by Austrian-born engineer Horst Leitner in the early 1980s. Leitner had been a successful motorcycle racer in Austria before immigrating to the United States to pursue his dream of designing his own motorcycles. The name of Leitner’s new company came from his 1981-patented device to eliminate chain torque for improved handling. Known later as the A-Trax, Leitner originally called the device the Anti-Tension Kettenantrieb or “ATK” for short. ATK started out building custom chassis for Honda XR motorcycles. They were designed to turn the mild-mannered play bikes into full-fledged racing machines. 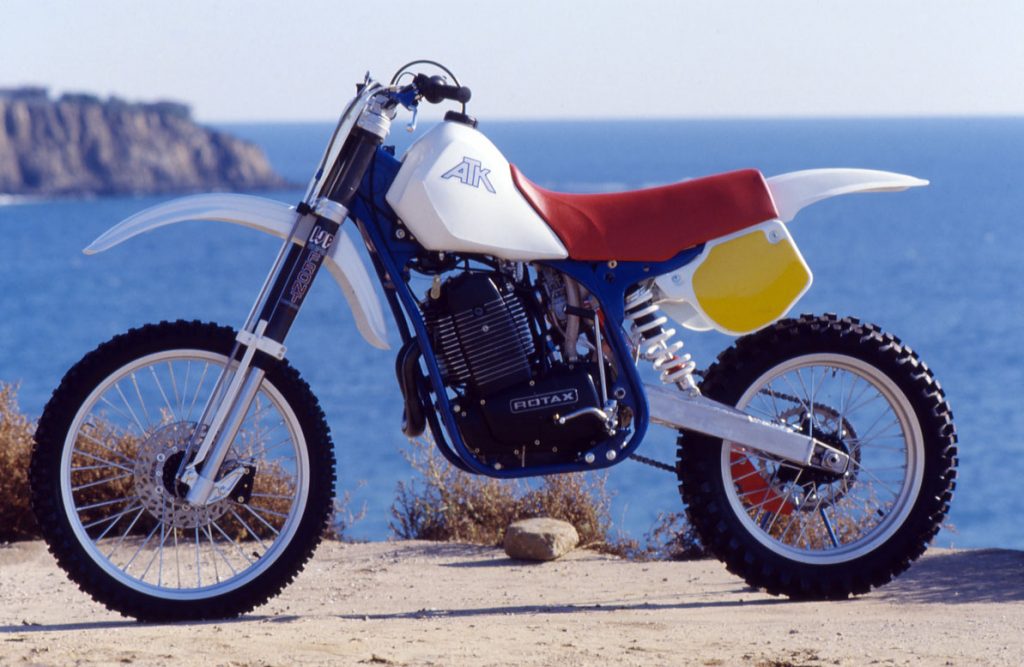 Introduced in 1984, the original ATK560 was considered quite revolutionary for its time. Using a thundering Rotax motor, premium White Power suspension, and loads of innovation, the ATK was a unique machine, for unique tastes. Photo Credit: ATK

After the success of the kit bikes, ATK decided it was time to try their hand at producing a complete motorcycle. ATK’s prototype machine used an Austrian built Rotax 562cc four-stroke motor bolted to a chromoly steel frame with White Power suspension.  The ATK was a revolutionary machine for its time, featuring Leitner’s innovative A-Trax , inverted WP front forks, and a single link-less rear shock. In an era where four-strokes were considered playthings, this was a 100% serious race machine. The reaction to the initial prototype was so overwhelming that Leitner set about making his dream of an ATK production machine a reality. 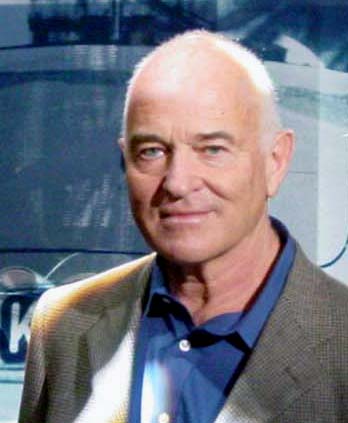 Austrian-born engineer Horst Leitner started with an idea for an innovative rear suspension system and grew that into the sixth largest producer of off-road motorcycles within ten years. His passion for innovation has made him a major player in the automotive, mountain bike and motorcycle industries. Photo Credit: ATK 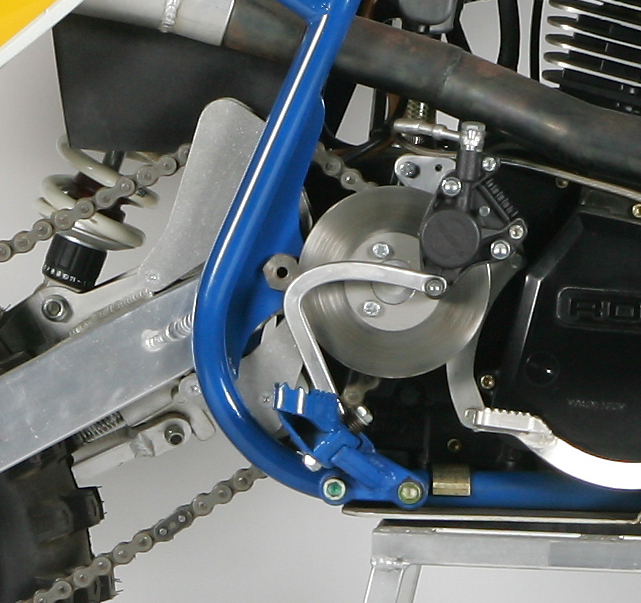 This unique chain linkage was ATK’s original claim-to-fame. Dubbed the Anti-Tension Kettenantrieb (ATK for short), this arrangement allowed the rear suspension to work better by reducing the torque forces placed on it by the motor.   Photo Credit: Stephan LeGrand

In 1989, the ATK 604 (it still used a 562cc motor, but ATK changed the name to 604 for marketing reasons) was the master blaster of the Open class. Even compared to contemporary 500cc two-strokes, the ATK was an absolute rocket. It was a 100% custom built, no compromise motocross machine. At $6950, the ATK cost twice what a new KX500 went for in 1989. For that money, you got an air-cooled Austrian-built four-stroke that could rip the holeshot at a 500 National right off the showroom floor. The suspension was all premium Dutch White Power (now WP) components tuned just for the US market. The front brake was a KTM Brembo unit, while the back was a custom disc mounted in their signature fashion to the countershaft. At an annual production of only 200 units, you were guaranteed each bike was hand-assembled with care. This was a premium machine for a discerning racer. 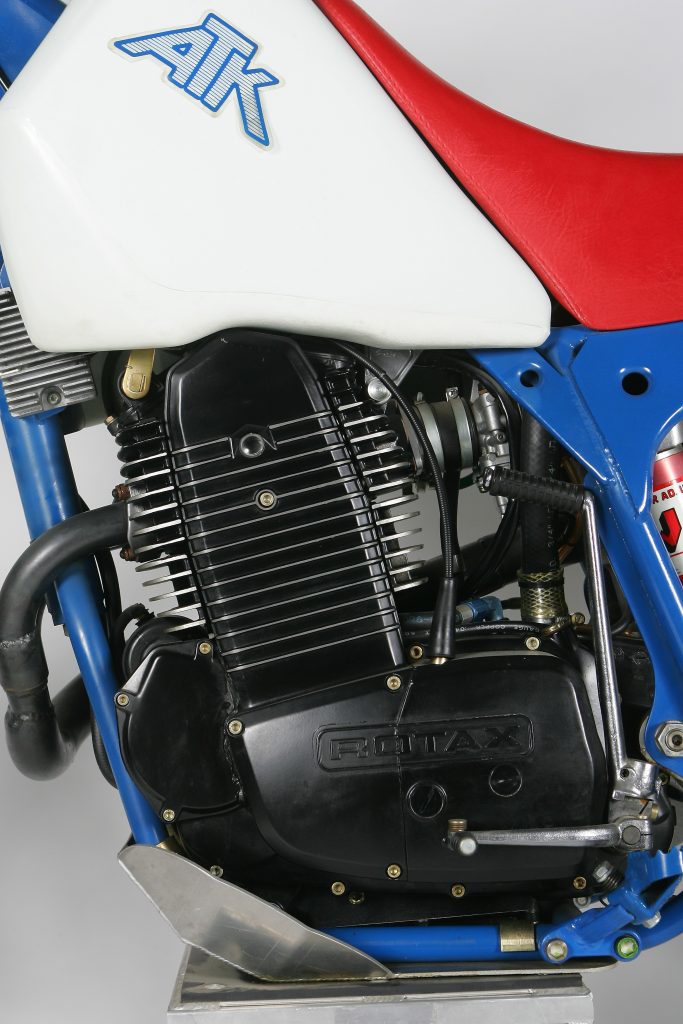 Instead of designing their own engine from scratch, ATK turned to Rotax to provide the power for their motorcycles. The Austrian built motors were heavy and decidedly low tech, but claw-hammer reliable and rocket-ship fast. This 562cc thumper pulled hard from the first crack of the throttle and kept on pulling till the rev limiter kicked in. Compared to its two-stokes contemporaries of the time, it was both faster and easier to ride. When you added in the electric start option, you had the ultimate open class power plant of 1989. Photo Credit: Stephan LeGrand

The ATK’s 562cc Rotax air-cooled mill was hardly state of the art even in 1989. With manufacturers like KTM and Husky already producing liquid-cooled DOHC racing singles, the Rotax mill looked downright old-fashioned by comparison. What the motor lacked in curb appeal, however,  it made up for in rugged reliability and blistering performance. The 604 produced a thundering staccato of four-stroke torque from the second the throttle was cracked until the rev limiter kicked in. The motor had ground-shaking power and was fast enough to show even CR500R riders its tail lights. There was a bit of a learning curve for riders raised on two-strokes, however.  The motor revved slower than a two-stroke and the power was more Massey Ferguson than twin-turbo Porsche. There was also A LOT of engine braking under deceleration. Today’s four-strokes have virtually none of this old-school trait, but rolling off the throttle on an ATK was like throwing out an anchor. On the plus side, the reward for learning to manage the ATK’s quirks was holeshots by the dozen. 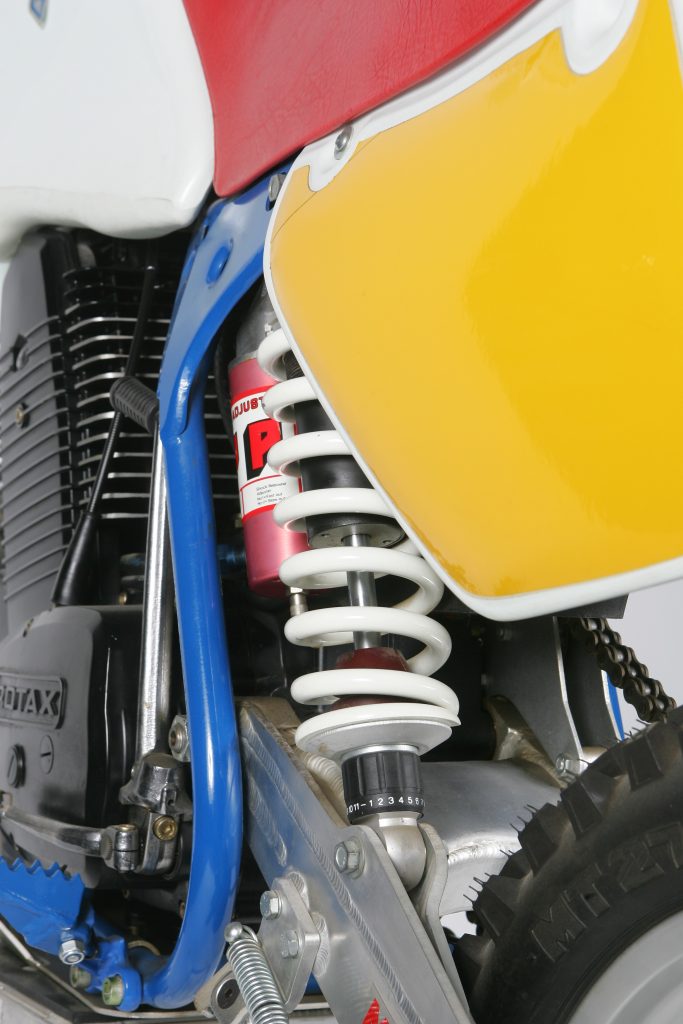 The ATK 604 used a White Power shock mounted directly to left side of the swingarm. Much like a 1998-2010 KTM, there was no linkage between the shock and the swingarm. This simplified servicing and saved weight. Photo Credit: Stephan LeGrand 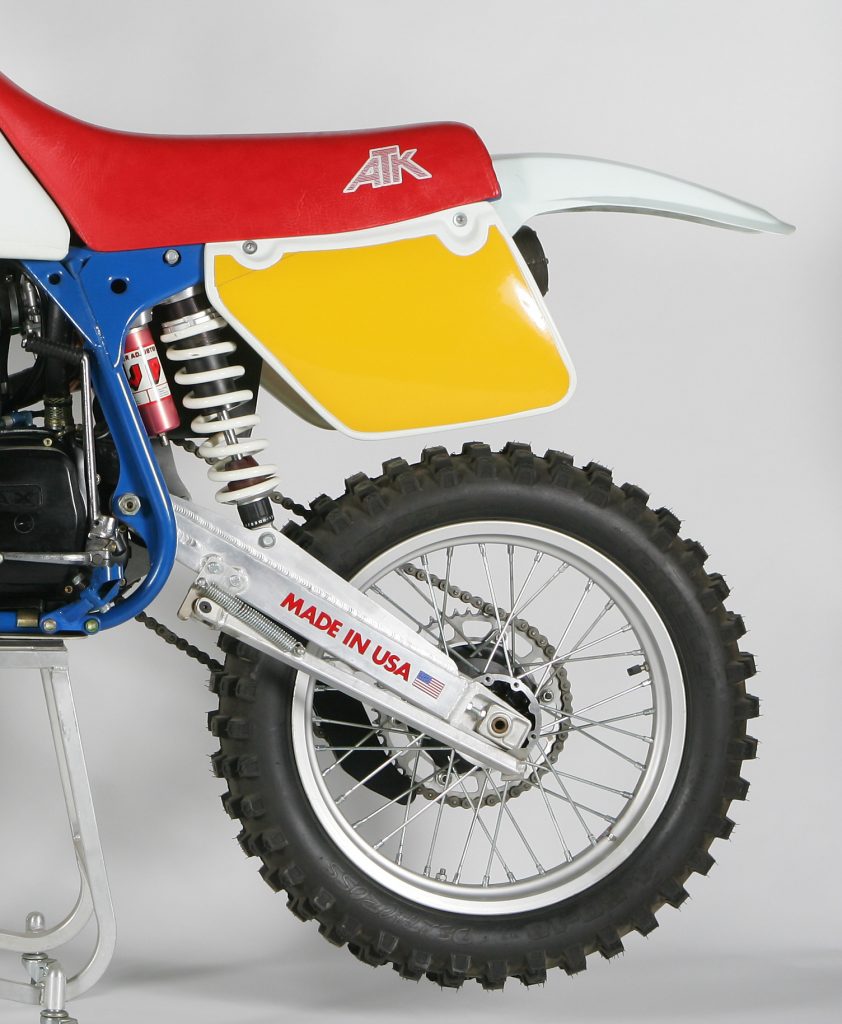 Unlike most European bikes that used the WP components in the 1980s, the ATK 604 actually featured excellent suspension action. The combination of ATK’s patented A-Trax chain torque elimination system and careful setup gave the bike the best rear suspension of any Open class bike in 1989. Photo Credit: Stephan LeGrand

One disadvantage the ATK had over its two-stroke competition was weight. In ’89 the 604 came in two configurations, one with electric start, and one without.  If you got the kickstart model, the bike weighed a slightly porky 247 pounds. If you ponied up the extra $1000 for the starter, that weight swelled to 262 pounds. That put the 604E in XR600R territory and a good 30 pounds heavier than any of the two-stroke 500s. Of course the tradeoff for the extra weight was that magic button and on a big four-stroke, that was no minor thing. Today’s 450s make starting a piece of cake, but in the eighties, starting a big thumper was no laughing matter. If you stalled a hot four-stroke you might end up kicking for an hour before the big beast would light. Overnight ATK negated the single biggest disadvantage thumpers had to their ring-ding competition. 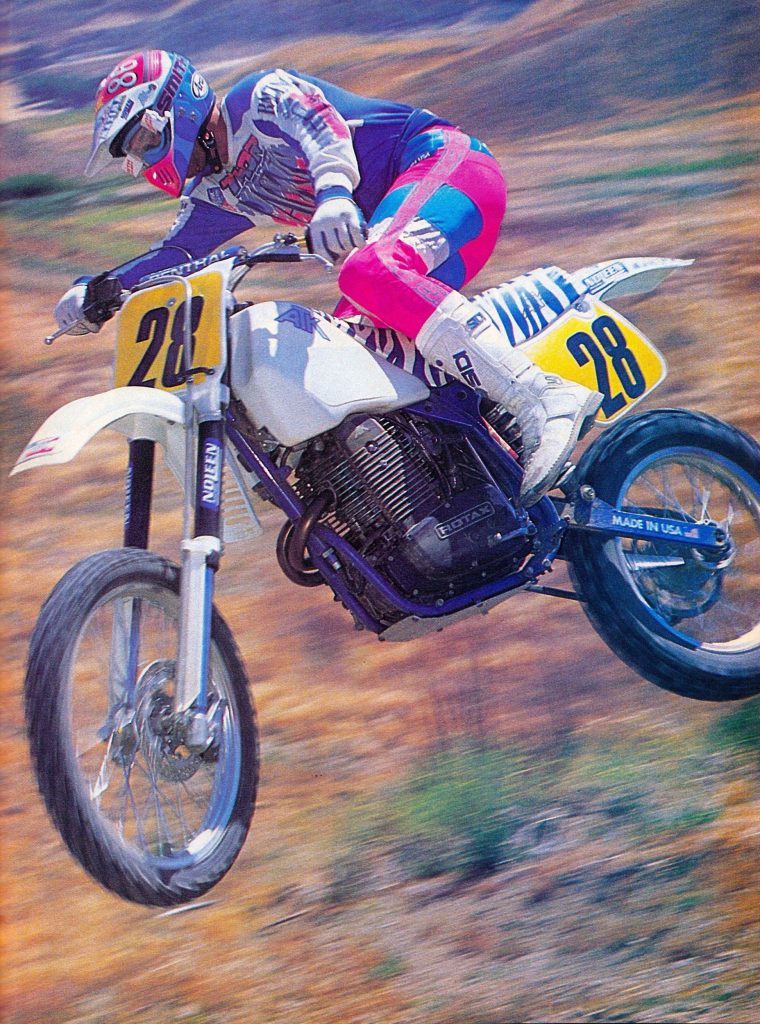 In spite of its substantial size and prodigious girth, the ATK 604E was an accomplished handler and able flier. Photo Credit: Dirt Bike

Weight usually puts a great deal of stress on suspension, but the ATK’s White Powers were up to the challenge. At the time, White Power did not have a sterling reputation in America. Their forks and shocks had graced many European bikes over the years, but their performance always left a lot to be desired. The problem was improper setup, as the Euro brands tuned their bikes up for the faster European circuits. ATK rectified this problem by setting up the 604 for the American market. The suspension was stiff enough for our jump-filled tracks, while still remaining plush enough to absorb smaller hits. The combination of the WP shock and ATK’s patented A-Trax torque elimination device gave the 604 the best stock suspension of any Open class machine in ’89.  The WP forks were firm, without being harsh, and set up nicely for hardcore motocross use. Since every ATK was virtually a custom built machine, you could also request ATK set up your 604 for cross country racing. Either way, you were guaranteed excellent suspension performance. 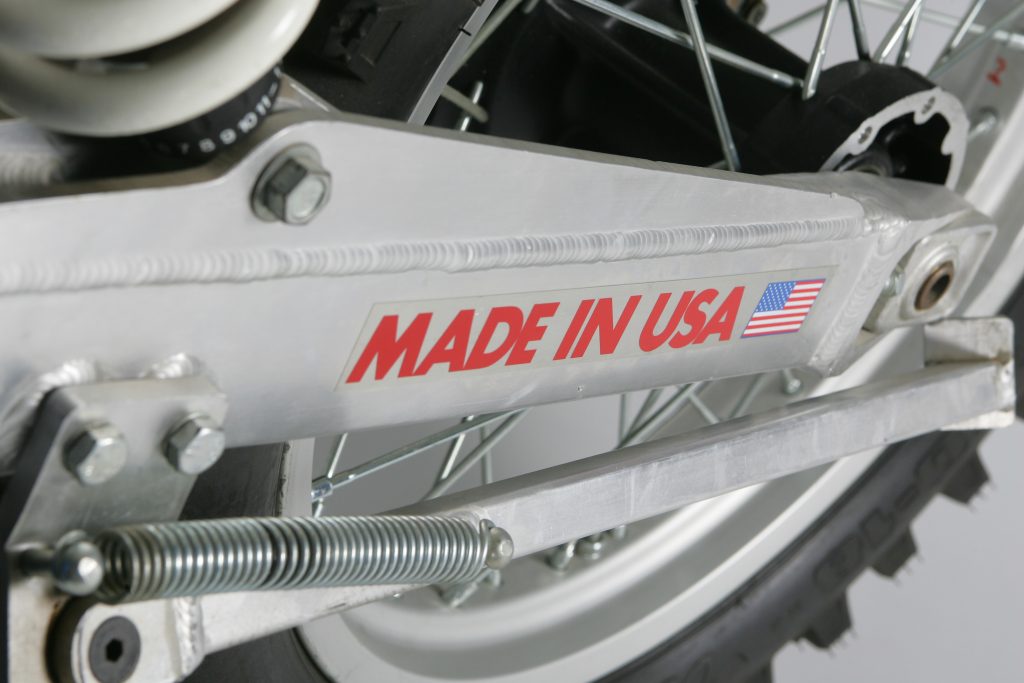 Even though most of the bike was made up of European-sourced components; each ATK proudly bore the “Made in USA” label. Photo Credit: Stephan LeGrand 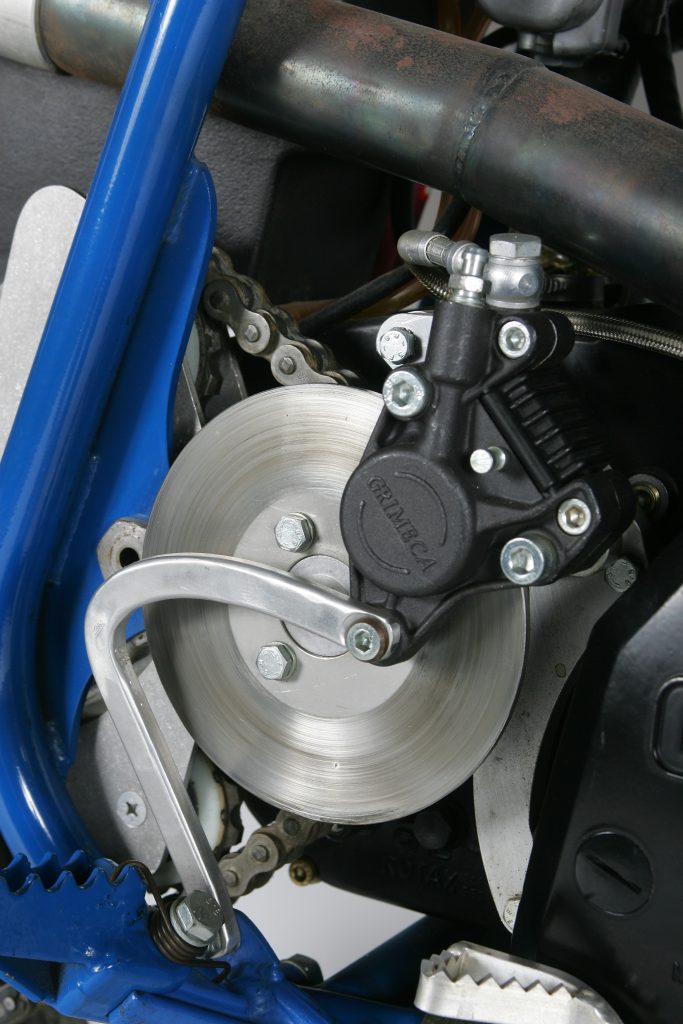 One of the unique traits of all ATKs was this countershaft-mounted disc.  This design was used to reduce unsprung weight and lessen brake torque on the rear suspension.  Unfortunately, braking power and fade resistance were reduced greatly by its diminutive size. Photo Credit: Stephan LeGrand

Handling on the 604E was excellent for its size and weight. The bike was very tall and wide, with its huge motor and large 4.2-gallon fuel tank. Combined with the 262-pound weight, the ATK was no bike for a small rider. It required a good deal of skill and strength just to muscle the big machine around. Here, the power characteristics of the Rotax thumper worked against the bike. The prodigious power pulses only served to magnify the feeling of mass when riding the machine. In spite of the heavy feeling, cornering was excellent and the ATK was rock-solid at speed. As long as you were strong enough to handle the bike, it was a deadly race weapon. 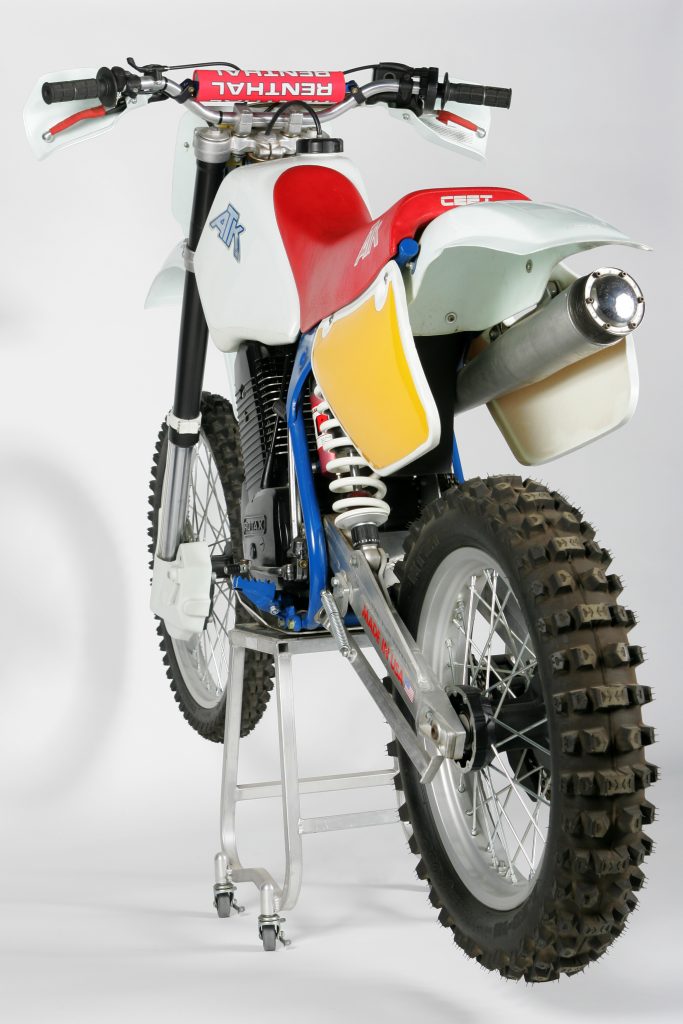 In the eighties, a Supertrapp megaphone exhaust like this was considered high performance. You could adjust the number of discs in the end cap to tune the power and sound output.  It is a far cry from the slick carbon fiber and titanium pipes we see on thumpers these days. Photo Credit: Stephan LeGrand 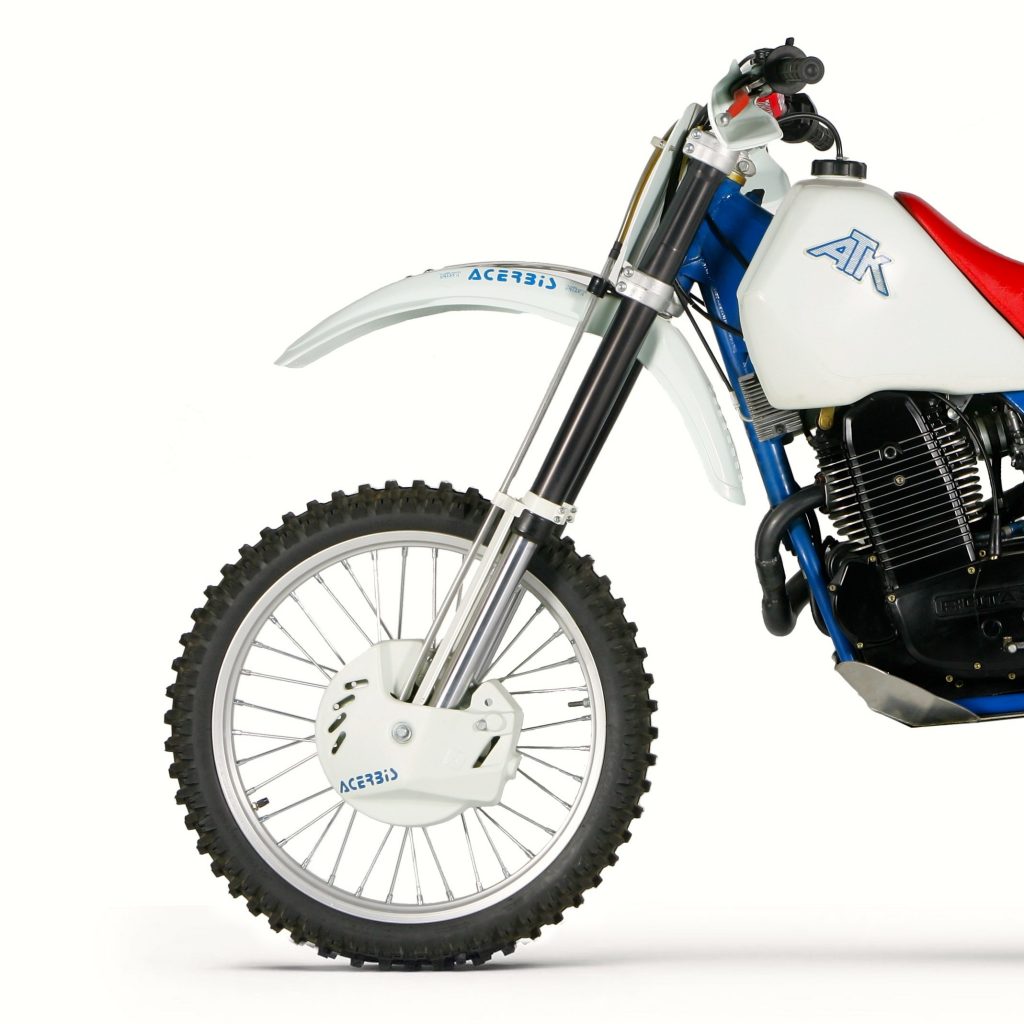 White Power’s inverted 4054 forks handled the suspension duties on the ’89 604E. They offered 11.8-inches of travel and adjustments for compression and rebound damping. With each 604E set up at the factory for its individual owner’s speed, skill, and size, they offered the best suspension performance in class in 1989. Photo Credit: Stephan LeGrand

One of the strangest things about the 604 was its unique rear brake system. The rear disc on the ATK was mounted on the countershaft and actuated by a backward-facing pedal and under-the-tank master cylinder. Because of its positioning at the countershaft, the disc had to be significantly smaller than a traditional rear rotor. There were a couple of reasons for ATK’s innovative brake placement, both related to improving suspension action. 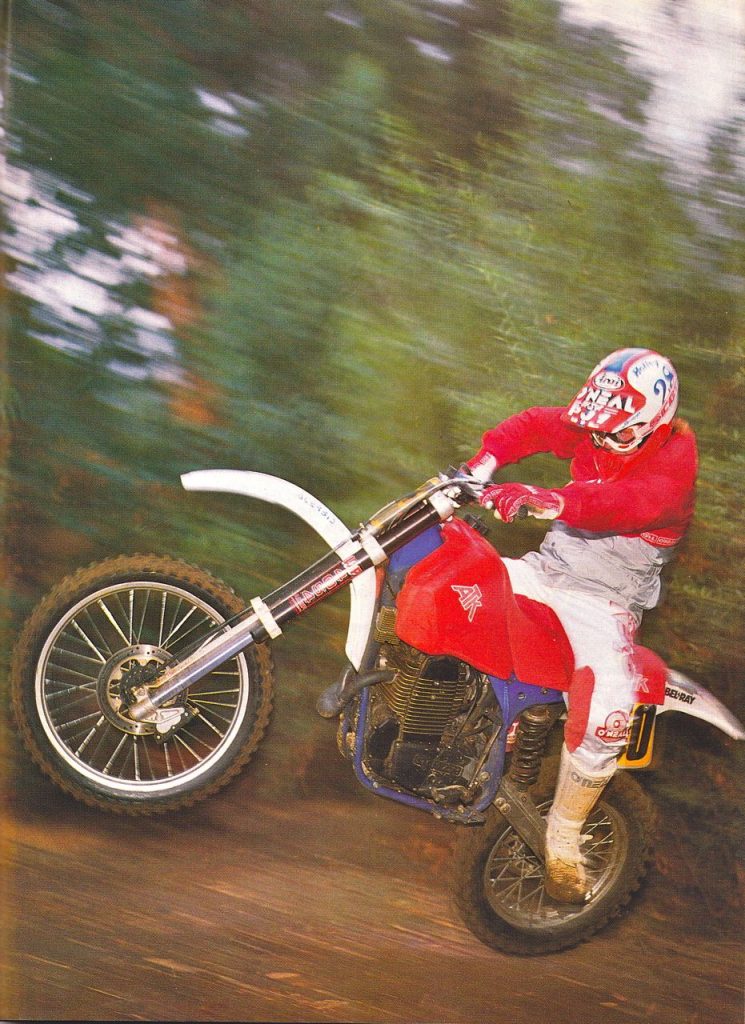 With a talented pilot like Jim Holley aboard, the ATK 604E was capable weapon off-road or on the track. Photo Credit: Dirt Bike

By removing the rotor from the rear wheel, ATK lowered the unsprung weight and reduced the brake’s torque-effect on the rear suspension. Together with the A-Trax, this helped give the ATK its supple suspension action and control.  On the downside, however, the smaller disc was more prone to fading and offered less power than conventional designs. Because of the 604’s tremendous compression braking, however, this was less of a problem than it would have been on a two-stroke. 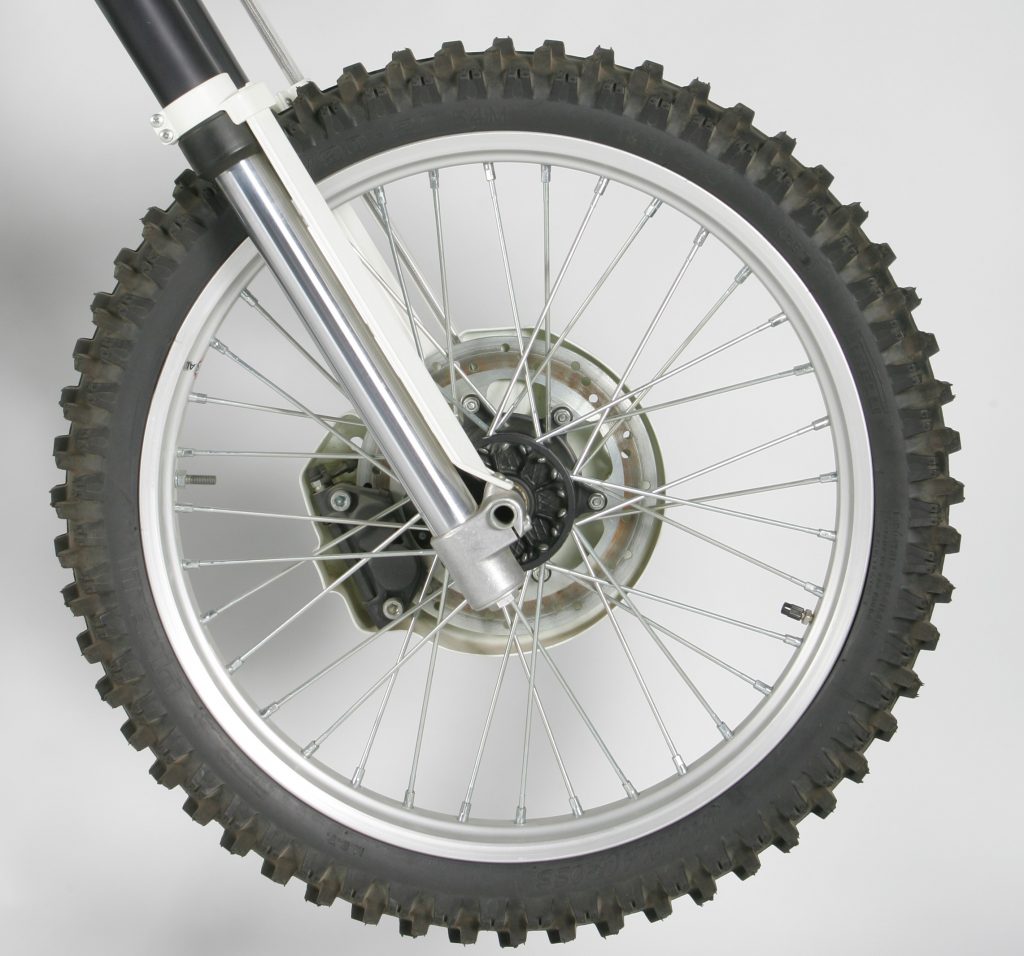 The front binder on the ATK was comprised of components from Magura, Grimeca, and KTM. Interestingly, careful setup led to better performance than KTM got out of similar components. Photo Credit: Stephan LeGrand

On the front, the ATK used an odd combination of Magura, Grimeca and KTM components to handle the braking. This worked better than the diminutive rear binder and better than the similar setup on KTM’s own big-bores. Braking force and feel were decent. but only barely adequate to handle the bike’s massive heft. Thankfully, the big Rotaz single provided a major assist when it came time to slow things down. 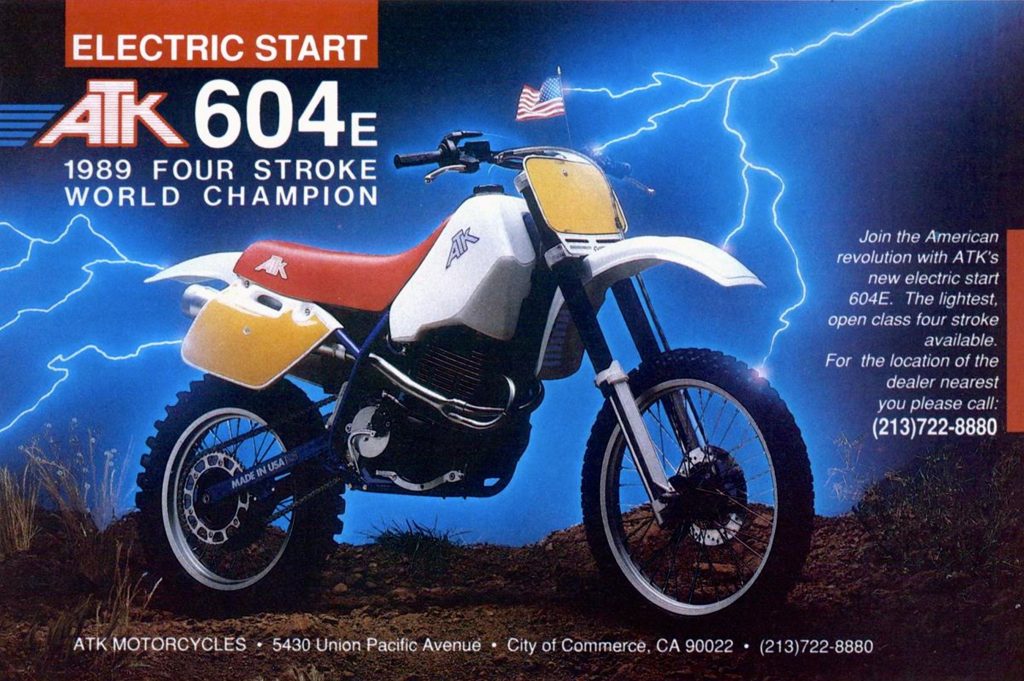 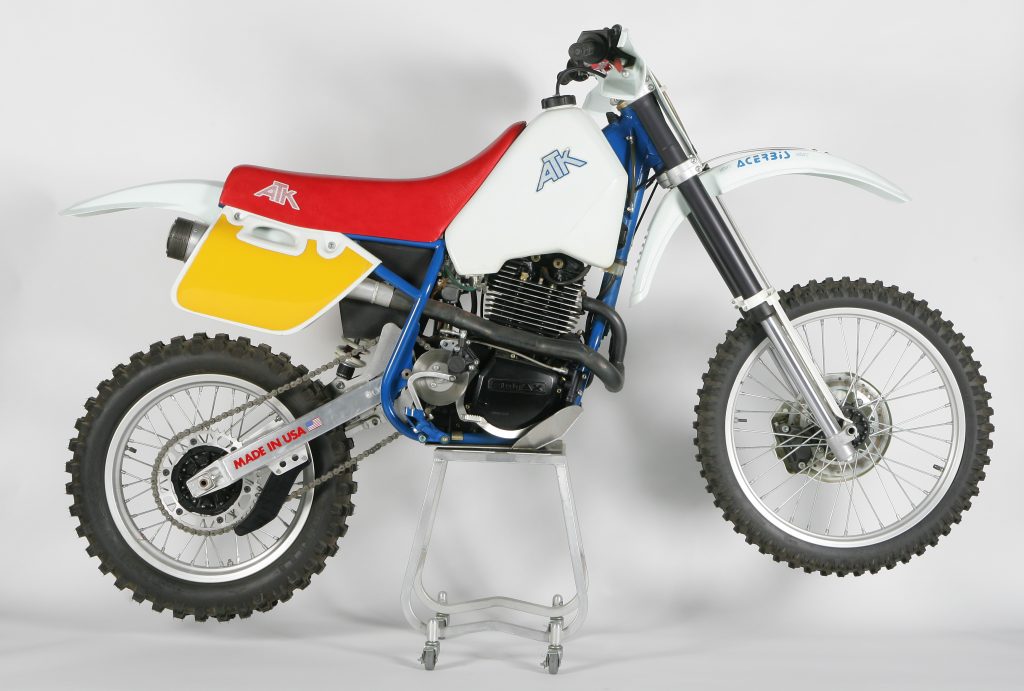 With only 200 hand-built 604s being produced annually, ATKs could be special-ordered in dozens of different configurations.  Everything from the color of the tank to suspension setting could be altered to suit the taste of the buyer.  At nearly twice the cost of a new Japanese 500, the ATK was a premium bike, for a premium customer. Photo Credit: Stephan LeGrand

The ATK 604 was not a machine for everyone. It was a bike for more well-heeled riders. Riders with the experience to make use of its awesome potential and the bank account to handle its jaw-dropping price (I know $6950 does not sound bad now, but that was a fortune in ’89). It was exclusive, unique and one of the best Open class race bikes made in 1989.