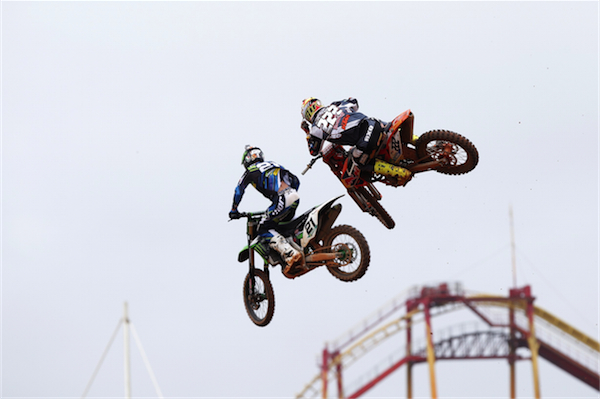 With seven World Championships to his name you would think Tony Cairoli would be losing motivation but after his performance in Brazil he seems to be getting even better!

With seven World Championships to his name you would think Tony Cairoli would be losing motivation but after his performance in Brazil he seems to be getting even better!

Cairoli was simply phenomenal on Sunday on a unique circuit in the shadow of a theme park and surrounded by grandstands filled with cheering Brazilians. Cairoli had speed in reserve that no-one could get close too and even with Desalle and Paulin on form in the second moto, Cairoli still caught and passed them both.

Desalle was left in awe of the Italian’s speed and you have to wonder just how his rivals maintain their self-belief when Cairoli is that dominant.

Cairoli has admitted before that he never rides at 100%, the scary reality is that we never really get to see the true speed Cairoli has, but in Brazil we saw short bursts of that speed and he could reel his toughest competitors in at will then he just put it in cruise control.

Behind him Jeremy Van Horebeek is putting himself in the Paulin, Desalle and Nagl challenging group. The Belgian has been a revelation on the Factory Yamaha and lead half the first moto before Cairoli got him. In race two Van Horebeek had an average start but still pulled through to fourth and caught Clement Desalle at the end but was unable to make the pass.

Van Horebeek finished tied on points with Desalle but got third on the podium with Desalle in second courtesy of a better second moto finish.

Cairoli has a 30 point lead already but behind him there are only two points between second and fifth! Paulin and Van Horebeek are joint second on 112, Desalle is a point back and Nagl one point behind Desalle on 110. These four are very close in speed and it will be interesting to see who will come out on top and if any of them can figure out a way to beat Cairoli.

Evgeny Bobreyshev had a fantastic fifth in moto after getting a plate and screws in a broken ankle only two weeks ago! Bobby probably can’t remember the last time he raced without pain but when he does he will join the big five regularly – as long as he stays on two wheels! Bobreyshev wins the tough guy of the weekend award.

Todd Waters got a good start in race one and only lost sixth place in the last corner to Gautier Paulin who had come from 17th after crashing while leading. Waters though ended up tenth with an average start in race two. The Aussie is proving a solid rider in his first year in GPs.

Rui Goncalves is getting back to form and Brazil was his best performance of the season with sixth overall. The Portuguese seems to be getting more comfortable on the Yamaha and should be even better in the next few rounds.

The man who is really impressing is Joel Roelants, somehow the Belgian is a full on privateer after no-one believed in him following a tough 2013 debut 450 season but Roelants is showing he has his confidence back with ninth overall – and he was not happy with his riding! Some teams might be wishing they had given him another opportunity.

It was a good day for the Fork Rent Wilvo KTM team. Matiss Karro got a fine seventh in race two and Jake Nicholls showed his pace on  450 and just missed out on a top ten in moto one. Nicholls just needs a start.

But there was no one happier in Brazil than MX2 rider Arnaud Tonus on Sunday night. The Swiss talent finally won his first ever GP after two years painful injuries threatened to destroy his career.

With Jeffrey Herlings missing through injury it gave everyone an opportunity to get a win but it was Tonus who delivered. As an added bonus Tonus also got the red plate and now leads the championship.

Tonus smoked the field in race one Herlings style, with his smooth style a joy to watch. If the usually humble Tonus can take the confidence from this race that he should, he will be a big thorn in Herlings side because Tonus has the talent to give the Dutchman a run for his money.

The CLS Kawasaki rider was very emotional after his win and thanked his family and the late Georges Jobe who coached Arnaud for a number of years. The emotion gave us a glimpse into just how hard it is to win a GP especially after coming back from all those injuries.

Glenn Coldenhoff won race two and put himself second in points only two behind Tonus  with Dylan Ferrandis back in third on 107. Coldenhoff is on fire this year.

Herlings, despite missing this round, still sits in fourth just 15 points back! But the rest of the contenders know this is their chance. Herlings isn’t at his best and they are all now gunning for the title.

Bad starts destroyed Max Anstie’s shot at a GP win but the Brit was very fast and came through the field both times to land on the podium and lift himself to seventh in the championship. Anstie just needs to put it all together and it should happen soon.

Fifth overall with a career best moto was young teenager Tim Gasjer. The Slovenian is in his first full year of GP racing and showed that with a good start he can get on the podium. Gasjer held second for a long time before Tonus got him but he stayed consistent on a tricky track to get third and fifth overall despite crashing in moto one.

Once this kid gets some more self-belief and the HRC Honda he is on becomes even more advanced he could be a regular top five rider.

Thomas Covington was hovering around the top ten in both motos but a crash in both motos for the American meant a 17th and a DNF. Covington will race the next GP then decide whether to return home or do some more GPs.

The series now heads to Italy in two weeks, Cairoli’s home ground and the return of Herlings who will be desperate to get the red plate back and re-establish his dominance. But will Tonus let that happen? It’s going to be good!