Swizcorner- “From Budds to Spring” 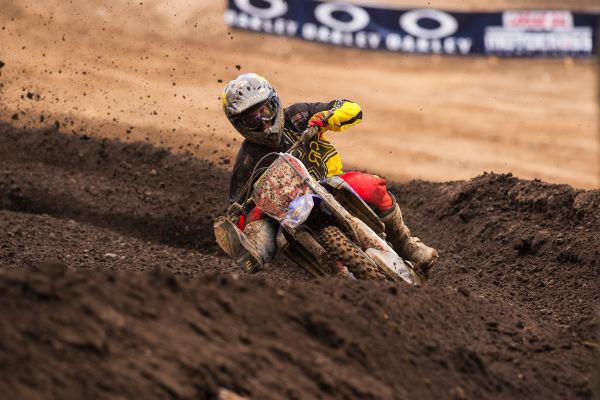 Looking at the likely victors as we breach the halfway mark of the series.

Looking at the likely victors as we breach the halfway mark of the series.

I want to look at each class, consider the strengths and weaknesses of those still in a realistic shot at the titles, in a very simplified outline format and then elaborate on how I expect each class to breakdown at Millville this weekend. It’s a good thing Weege doesn’t like PulpMX, me or Swizcorner in particular because as someone who abhors calculating points averages, he’d likely have a stroke over my unabashed and reckless prediction of the coming round. (Hi Weege, “I am Millville”)

First off, I need to preface, my categorization of strengths and weaknesses are considered in a vacuum. Which is to say they are tallied in comparison to the other riders they are battling for the title, NOT in consideration in the class as a whole. For example, when I state that “Endurance” is a weakness of Justin Bogle, that simply means that when compared to the endurance of J-Mart and the Chupacabra, he is a couple ticks off in the endurance category. It’s no slight to be a couple “ticks off” of a former class champ and breakout story of the 250MX series; recent 250SX title or not.

With that little disclaimer out of the way, let’s get it on!

As we approach the 8th round of the series in Millville Minnesota, aka: “Martin’s Playground”, you’d have to be sniffing glue to not expect Jeremy Martin to walk away with a few more points tacked on to his lead. Of course anything can and often does happen in racing but I’m playing the safe money that J-Mart will do the obvious. You may be shocked to hear that last year J-Mart, Baggett and Bogle went 4-5-6 OA, respectively at Millville.

Cooper finished a distant 16th so you can bank on him being the most improved of this fantastic-four. I actually see Cooper finishing runner-up to teammate Jeremy Martin this weekend. He had one of those Cooper Webb “off weekends” in Budds Creek and Cooper is one of those riders who likes to not only rebound from such races but do so with a vigor and purpose. He’s on the same Yamaha as Martin and we’ve all seen how the new blue bikes “maka-da-power” and I think that will be a huge asset in the power robbing depths of Martin’s backyard.

I actually have a sense that all that Baggett momentum gained in Budds Creek is going to count for little in Millville. We’ve seen that Baggett’s bread and butter is the harder surfaces but I also remember last year when he made some ridiculous moves as he swept the corners and made more than a few top guns of the class look a little silly. I may have just brought my own argument and prediction into doubt… Such is the dangerous game of predicting motocross results. Be that as it may, I’ll stick with my gut that Baggett will finish behind the Yama-BRO’s.

Don’t think that just because Im addressing your 2014 East Coast 250SX last in this little four-rider breakdown that I’m expecting him to finish on the tail-end of this group. I see the Rap-Pak Captain feeling right at home in the “sands” of Springcreek and pulling down and OA podium. Justin has been vastly improved this outdoor series and his confidence in his program has seen him through this far. I expect Justin to actually excel in the closing rounds, not begin wearing down.

Remember when the rumors began that Ken Roczen had joined Aldon Bakers program? People said “no way”, “Roczen can’t join the program, Aldon is always with RV”, “Roczen can’t train with RV, he’s on a KTM”. Well, all those thwarting excuses proved invalid and sure enough Ken Roczen was on the program. Next were the claims that Ken couldn’t or wouldn’t stick with the program because he loved drinking Redbull too much, or he loved In ’n’ Out too much or he loved surfing too much… yada yada yada. Well not only has Ken stuck with the program, he has immersed himself in it from day one and proven he not only has the guts to give up the freedom’s he once enjoyed, he’s got the skill and killer instinct to achieve that which RV, RC and JS aspired too under Aldon before him.

When the motocross series kicked off at Glen Helen, Roczen was impressive but the OA result went to Dungey as we all expected. After all, Dungey has long been considered the man when RV is sidelined in the outdoors. Since round-one though, Roczen has proven the match to Dungey’s consistency with better starts, quicker passes and fewer mistakes. That all adds up to the points lead, a lot of confidence and not much for Dungey to point to and target as a weakness. Alas, we are heading into the track Ryan Dungey grew up racing and don’t forget the X-factor of that hometown support. Dungey has been to this dance a time or four and knows what’s at stake. I expect him to deliver in Springcreek like he did in Budds Creek except tighten up the points between he and Ken Roczen. Dungey with a 1-1.

I called Trey early in the series for a moto-win and he’s been closing the gap but hasn’t really put a fright into the KTM guys yet. You gotta have mass amounts of respect for Trey though with how much heart he puts into every moto. He pulls great starts consistently, leads laps and fights back HARD when he is overtaken. All too often we see the dominant riders in this sport make a pass and see no retribution, I love watching Trey make them not only work for it but pay for it when they think there will be no retaliation. I wouldn’t be overly surprised if Trey got between the KTM’s in a moto this weekend.

The stat they showed on the Budds TV broadcast regarding Ken Roczen’s “2nd-half series finishes” can not be ignored. Until he debunks it, it is relevant. Springcreek has the full potential to be the “swing-round”. Tune in, the storyline and stakes are as compelling as it gets!