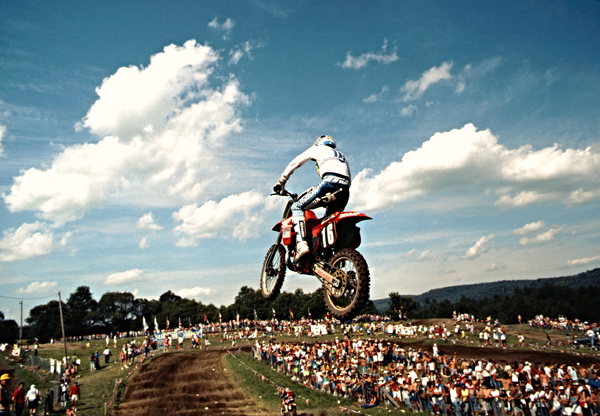 This is a story about a love affair between a man and a track. Well, not really.

This is a story about a love affair between a man and a track. Well, not really.

This year marked the 25th anniversary of my first trip to Unadilla.  The first, for the 1989 USGP, Ricky Johnson’s stunning comeback win against the world has been well documented on this site, we covered it a couple of times in the early Motocross Captured feature, go back and check it out.

During the past quarter century a lot has changed, much has stayed the same though.  Racers are still racers, the field is still deep, the riders are always trying to find the magical set up on their bike and the privateers are still struggling.  Well, at least they have a home now thanks to Matthes, Privateer Island!

Over the years the track has gone from a farm that turned into a motocross track once a year, to a full on world-class moto facitily.  The evolution has not been an easy one, the once great loam that was only ridden on once a year, eroded away over the years, exposing a gravelly new layer that was not very well like by the riders of the mid to late 90s through the early teens.  Through a lot of hard work the Unadilla crew has replaced that good soil and returned the track to it’s original form.

The transformation has also included some layout changes, a few minor tweaks, and some major additions.  Jumps were added to places that were once rolling natural terrain and that terrain hosted quite a show this weekend.  At the end of the day the track looked a lot like it used to, lots of square bumps and ruts, truly gnarly terrain for racing.

It struck me while watching this weekend, the premier class, whether it’s 250 two strokes, or 450 4 strokes has always been loaded, yet, there always seems to be 1 or 2 guys that take it to the next level and gap the field.  This year it’s been the Dungey and Roczen show, co-starring Eli Tomac and Trey Canard.  When I first started shooting it was the Rick Johson and Jeff Ward show, with a slew of co-stars, the point is, the racers are going to race and there’s always going to be a few that will ride just a little closer to that ragged edge in order to win.

The ride into the track is pretty much the same, the small towns like New Berlin remain timeless, the folks gather on their front porch in lawn chairs every year to watch the racers and fans go by.  The vans have turned to box trucks and the box trucks to big rigs, but the people remain the same, the VFW still sells BBQ chicken dinner and the locals enjoy the one day a year that their sleepy towns wake up.

Being at the track is interesting, when I first started shooting there wasn’t any media facilities, VIP areas, or bleachers.  Not many women showed up either, it was a pretty rough crowd back in the day.  Now it’s a family event, hugely attended with great facilities and all kinds of things to check out including the Legends and Heroes touring museum.

The constant is the racing and once again that was great, Trey Canard, Ryan Dungey, Ken Roczen and Eli Tomac put on quite a show.  Christophe Pourcel fooled me, he never looked like he was going fast, yet he managed to take home another Oakley bomb award and the overall with a 1-2 score.  At the podium I had to shake my head as the Unadilla faithful started a USA chant.  Flashing back to the JMB days only seemed appropriate as he played  the villain to Ricky Johnson’s hero at that ’89 USGP, resulting in the very same podium chant from the rowdy crowd.

Driving out is still a nightmare, there’s only 1 road to the track and it doesn’t move for hours.  I stayed around until around 8 pm editing photos and still got stuck at the only traffic light in New Berlin.  Gotta love it.

If you ever get a chance book a trip to the Unadilla national, the racing is always great and the location is like no other.  Bonus for baseball fans, it’s also very close to Cooperstown and the Baseball H.O.F.

Going through my photos today, I’m already looking forward to going back and seeing what the future has in store, now, where’s that leftover chicken?