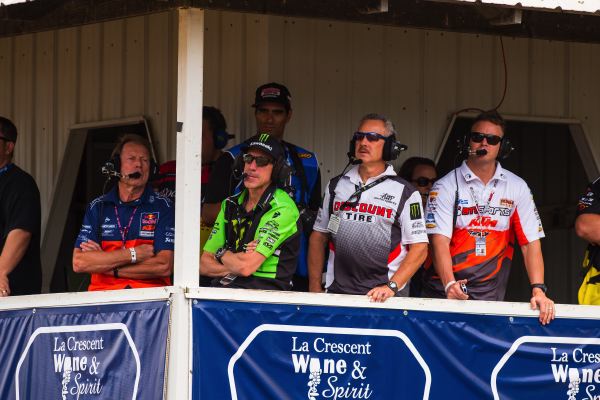 Spoiler alert: If you are 10 years old or younger, stop reading here. Sorry, everyone else, keep your eyes glued to the following paragraphs.

I’ve been so entrenched in moto for such a long time that I often catch myself looking at the rough edges and prickly aspects of moto as unique to this sport. I think we all do it. As passionate lovers of Motocross, it gets pretty easy to get a sort of tunnel vision and think that those pitfalls are shortcomings which hinder the growth of our sport but actually, they are usually typical for sporting and life in general, just with our own little niche-twists.

“You’re only as good as your last race”

The first example of this is the often cited, “you’re only as good as your last race”. While this is absolutely true, you’re a fool if you think it’s unique to moto and to complain about it comes off about as well as a hipster complaining about the number of ice cubes in their Cari-poo iced-coffee. It’s the same in not only every other sport in humanity but life in general people!

Are you a fan of football? Ever notice how fan’s talk about their favorite team on Monday depending on whether they won or lost? It’s either, “Superbowl baby!” or “what a bunch of undisciplined bums, we’ll be lucky to squeak into the playoffs”. It’s the same in baseball, basketball, hockey (this is like soccer but with ice, sticks and I believe an old tire sidewall cut into a circular shape)… and yes, in Life, too.

Remember when you were a child and your parents would ask you do to a chore? How about tasks in your career (work with me here, racers; pretend you had a 9 to 5 job)? Were your parents/bosses happier with you if it was done exceedingly well, or if it was teetering on acceptable? Of course they expect the best and when your results are below the standard expected of you, you deal with the backlash. Either your parents made you do it again or your boss would ream your ass and possibly fire you. It’s just life guys. Just because you bust your ass and are legitimately doing everything in your power to succeed, doesn’t mean that when exterior factors create resistance and failure; that fan and industry criticism is unjust. “Only as good as your last race”? You bet your ass you are; just like the Real Estate Agent is only as good as his last closing, your favorite team is only as good as their last win-margin or your parents pride in you is dependant on how well you completed that chore. Life, not moto, is a series of challenges and rewards. Don’t get caught looking through the rose-colored glasses, reality and reasonability will always seem cruel and you’ll come off looking like a whiner.

Ah yes, the Hater. Seldom seen, frequently heard and incessantly regarded to by both racers and their entourages alike. Let me break this to you like a Redwood tree-trunk over your melon: Haters do not exist. That’s right, like Santa Clause and the Easter Bunny, “Hater’s” are a culturally agreed upon phenomena. When this concept was birthed it was a method of discounting input from dissenting voices. Later when the internet was birthed, absurdity became the standard language by the anonymists(the term for these pseudo-courageous Anonymous masses) and the the worst-case scenario happened; a phenomena was personified and had a delivery vehicle for it’s collective voice. “Social Media” only further empowers the Anonymists and we are now to the point where people in general and athletes specifically, are using the “Hater” as a motivational tool. This is ludicrous.

By acknowledging the Hater, you empower it.

“This is for the hater’s” or “proving my hater’s wrong”, are terms that disgust me. Using negativity, as the fuel for your motivation is a fabrication. Anything which is external to your own personal ambitions and aspirations of greatness is a farce. Achieving your own personal pinnacle must be fueled from within or it will never last. It’s the same landscape in the brain as addiction. If you have an addiction and don’t have the internal resolve to get healthy and live a prosperous life, it simply won’t happen.

My point is simply this: Ignore the external negativity. Be honest with yourself and recognize your failures. Formulate a plan of reparation to limit them or turn them into strengths. Use your competition as a yard-stick to measure yourself against but know that your own capacity is designated by you internally, not your opposition and not the phenomena known as “the Haters”.