Hammerhead Designs: The Rise of Yamaha 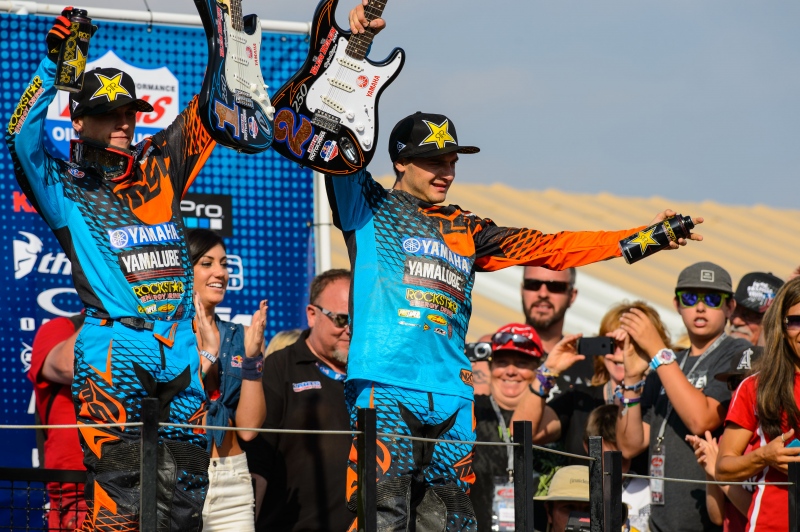 After being asleep for a long time, Yamaha is back

After being asleep for a long time, Yamaha is back

Yamaha has had a real turn-around year in 2014. It’s not a secret that many riders were previously unhappy with the new generation 450 and the 250 was lagging behind the others without fuel injection. With the new models, however, the results have spoken for themselves.

Justin Brayton came out swinging in the opening rounds of supercross, grabbing holeshots and nearly winning the 2nd round in Phoenix. He was noticeably quicker than everyone in the tricky whoops and served notice that it was a new and improved Yamaha on the track. Cooper Webb did the new 250 justice as well, running up front and displaying the long awaited update. Jeremy Martin would struggle early but would cap off the season with 2 wins in a row at the New Jersey and Las Vegas rounds.

As we approached the outdoor series, we knew that Yamaha had proven capable of being up front and Josh Grant would certainly be a threat as well. The big addition would be Valli Yamaha’s Christophe Pourcel. We hadn’t seen the Frenchman on an American race track since late 2010 and while no one could be sure how he would do, history said that he would be in the mix. When the gate dropped at Glen Helen, it was Josh Grant’s Yamaha that rocketed to the front. He rode flawlessly to take that moto win and the horsepower display on the long Glen Helen uphills was impressive. Just as soon as the 450 riders could clear the track, the two Yamaha 250’s of Jeremy Martin and Cooper Webb would launch out to the front of the pack. Martin was simply on another level that day and ran away with both motos. With Webb also landing on the podium, it was very clear… Yamaha was back. They had just taken 3 out of 4 moto’s at the first national of the year, a far cry from year’s past. As the season wore on, Martin would continue to prove the Yamaha prowess. He would be joined by Cooper Webb getting his first overall win at Muddy Creek and not to be outdone, Christophe Pourcel would claim victory in the hills of New York. The 250 class, in particular, would be owned by Yamaha’s version of the blue man group. Their new 250 engine design was putting out incredible power and that was evident on each and every start all summer.

Martin would go onto win the 250 class championship, Yamaha’s first small bore outdoor championship in more than 20 years. It was a testament to the work and effort put in by Yamaha to bring their program back to the top. They have taken a beating over the last few years as criticism for the reverse engine chassis was everywhere. Some model designs take some tweaking to perfect, such as the 2009 Honda 450. By 2012, the Honda 450 was considered one of, if not the best on the track. The same transformation is underway for the Yamaha models and this championship is evidence of that. They have taken their lumps but kept their heads down and delivered a world beater in 2014.

Looking ahead, the future looks bright for the ol’ tuning fork. They have arguably the two brightest stars in Webb and Martin to lead their 250 division and with the addition of Justin Barcia for 2015, have a legitimate championship contender for the coveted 450 class. Nothing is guaranteed in this sport but if you are looking for a brand on the rise, Yamaha’s program is poised and ready to spray champagne on everyone for years to come.