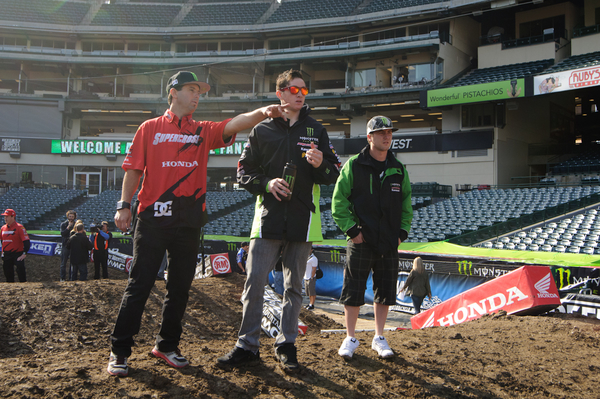 It’s a damn good thing the downtime between the end of MX and beginning of a fresh new SX series is so short for guys like me with attention span deficiencies. Anyone got a hook up on some kinda pill that can help me focus?

It’s a damn good thing the downtime between the end of MX and beginning of a fresh new SX series is so short for guys like me with attention span deficiencies. Anyone got a hook up on some kinda pill that can help me focus?

Anyhow, we’re at about what I consider the halfway point of this technical “off-season” of professional Motocross and Supercross and just like every year at this time, I’m having trouble even remembering what dirt bike racin’ looks and smells like. Well who cares about the smell nowadays anyway, it’s all straight gas and rev-limiter thunder claps. Boo, hiss for the four-stroke revolution. I’m eager for the day when leg warmers, corduroys and 2-strokes rule the day again.

I digress, so yes, it is the midst of the most boring season of all for us fans and we are finding our attentions pointed in all sorts of different directions. Hopefully anyway. If your one of those guys who can’t help themselves from always talking moto 24/7/365, then there’s a high probability you are a Vitard and need a hobby. I, for sure, have spent the days of this off-season working on projects, work, parent stuff… essentially everything other than paying close attention to the intricacies of the greatest sport on wheels. Because of this focal diversion, I have a couple issues that I *have* had pass across my PulpMX desk that I’d like to wax on about. Let’s move to the corner…

There are certain things in life, not many, that you hear about and they do more than raise your eyebrows. They nearly knock you off your feet. You feel sickly. You want to cry and sometimes do. And it takes some time for you to come to grips with this new, scary reality. Things like when you first hear that Santa Clause or the Easter Bunny isn’t real. Another of these instances is when you hear that Jeremy McGrath has departed Honda for Kawasaki. (wipes tear) It’s times like these when I’m glad I don’t drink or partake in the whacky-tobaccy because if I did, I for sure at some point over the last 10yrs would have bet someone my left…. pinky toe that MC would Ride Red until he kicked the bucket. Well, today I’d be a goofy limpin’, 9-toed mofo; so I’d like to thank my good genes or whatever it was that saved me from that ill-advised wager.

It’s crazy though right!? Jeremy McGrath may have entered the pro ranks on green but so what, Team Green was and is an ambitious program, so most kids with any ilk of being a fast-guy has been through that farm system. Jeremy returning to green is what you would consider a perfect storm. Team Honda’s R&D process is being altered, leaving MC a tad bored and usefully unemployed. And RV2 is headed out of the US, so MC joining forces with Kawi and bringing back his #2 to the green machine is a smooth move for Kawasaki. They publicize it as a triumphant home-coming and throw a party. What do I care what The King rides? I don’t but that doesn’t mean I don’t feel like Santa was stolen from me all over again. I wonder if the professional-level vocal detractors of the recent CRF450 hadn’t been so loud, if this change still would have occurred? It’s like that old saying about a butterfly flapping it’s wings creating a Tsunami somewhere in the world. The ripples of change.

Another thing which crossed my desk recently was all this talk of Jake Weimer on the DMXS show last week and how honest he was and the kudos fans were giving him for that honesty. All I have to say is, WTF is wrong with you “fans”? Jake Weimer sounded exactly like he always has in that interview and this time your patting him on the back whereas when he was a factory rider giving the same interview, you would call him a whiney bitch and rip him for it? I don’t get MX fans. So much of that group is made up of disingenuous wannabe knowitalls who will jump at any opportunity to say something inflammatory about the guys with the good rides but then when that ride is no more, they cry foul for the same rider they were ripping. Jake Weimer has always been the same. Honest and open. I have written about my support of his forthrightness in the past and usually people would say he should shut up, quit whining and ride. So do you want him to put on a cloak of pseudo-confidence and pretend he’s firing on all cylinders or tell it like it is even if it presents him as being a little emo? My answer is simple, be real. Don’t judge him for it. Imagine your life and career on display and subject to critique by any anonymous douche who has the free-time to judge. I get it, it’s a lot easier to criticize and judge than it is for you to be productive in the course of a day. Try just once to resist typing that negative uselessness. It’s easy and next time, the desire will be even less. The world will be a better place for it.

I was gonna tend to a few other things on this messy desk but I know you too have a short attention span and we have a few more weeks before the industry starts buzzing with preparatory activity, so go be productive. I’ll see you in a week or two.