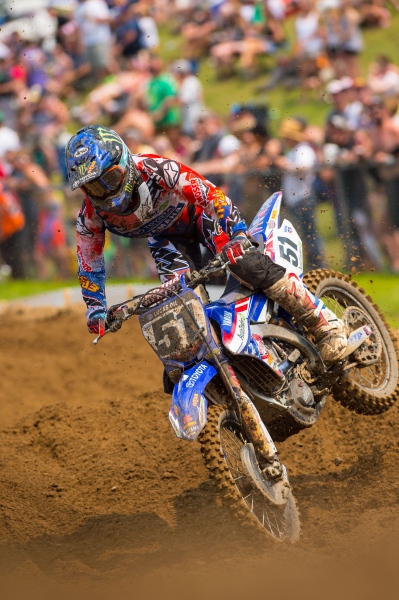 Barcia wins in the mud and gets the confidence from that to take another win with a couple of great rides. You riders are such head cases!

David Vuillemin: It has nothing to do with being a head case actually. I really think Justin found something in his riding prior/during the Budds Creek race. There is no way, if you know a little bit about the riders and the sport, that you can compare the Barcia we know to the guy that won in Budds Creek. It’s two completely different riders! In Red Bud, his riding style wasn’t as smooth as in the second moto in Maryland but still, better than before. He was hanging it out more than he was in the mud but you have to in Red Bud. It’s very difficult to ride JMB-like on today’s Red Bud track and be fast and competitive. I don’t know what happened to Justin’s riding style but he’s now keeping his momentum and making nice arcs in the turns. Before, he would’ve came too fast in the turns in Red Bud, blew the turns, stopped his momentum and clutched the shit out of the bike to exit the turns. I didn’t really see him to that on Saturday and it’s why he was in front too.

On a personal note, I’m surprised someone can change so drastically in the middle of a season. Riders don’t ever do that usually. Whatever they are at the beginning of the year, they are at the end. It’s pretty cool to see someone very excited to win too. All the riders that usually win are supposed to win and people expect them to win. They don’t show much emotion because they’re conditioned to win. On the contrary, no one expected Barcia to win and it’s a bowl of fresh air to see a rider “super pumped” after a win.

Roczen’s not the same rider, he didn’t get out in front of the front two and then couldn’t catch them either. Is this signing by RCH not working out?

It’s a tough season for Ken and RCH to say the least. It started to well in Anaheim for him though. Everyone, me included, would gave him a SX number 1 plate after the first races. 6 months later, it’s a whole another story. I still believe his move for bike reasons was a good move. Watching the 17 SX races and the 7 Nationals on TV, I still think a Japanese bike well set-up is better than a KTM. Dungey and Marvin aren’t winning races because they have a better bike than everyone else… They’re not riding a YZ250 in 2000… From the outside looking in, I feel like RCH is a big machine that is difficult to move. There is a TON of people there, a ton of opinions, a ton of advice. They talk a lot about data, about the revolutionary approach of the sport they have, they use test riders and on and on.

The bigger the entourage/team is, the more it’s difficult to perform and focus in my opinion. We’re are in a middle age sport that uses technology that was discovered 50 years ago. Dirt Bikes aren’t the space shuttle of Felix Baumgartner. But on the other hand, Ken hasn’t really been healthy since the Atlanta SX in February and before that, his crash in Oakland had to interfere with his momentum. That’s a long time. I think he would’ve been more competitive and prepared if he would’ve raced the full SX season. He’s been trying to catch the train while being injured since Hangtown. It’s a very difficult task to do even for one of the best riders this sport has seen. I think he just needs to finish the season, make the best of it, have some fun and focus about October 1st and the beginning of the SX preparation. He has nothing left to gain now unless something big happens to RD.

Mike Genova calls you and tells you he loves the sport and wants to be involved but do it the right way…what do you tell him?

I would ask him how much he wants to spend. With that number, we can set the goals of the team. I’d tell him to send a check. Then, I’d change my phone number and I’d tell him to get a suite at every race he wants to come at because he wouldn’t be allowed in the semi! hahaha. I am joking, I actually loved hanging out with the guy and he can hang out in his own semi…

Jeremy Martin went from first to fourth and back to first in that first moto. He stated he got some arm pump about mid-race, relaxed and then charged back to the front. Great rides by him, have you ever had a race like that and talk about Jeremy’s motos.

Jeremy’s first moto was very impressive. I thought he was gonna get 3rd when he got passed by Marvin. Mentally, it’s very difficult to regroup during a moto, turn it around, catch and pass the 2 other best riders in the class in the second part of the moto. Webb could’ve “easily” went 1-1 and we would talk about Cooper right now and not Martin. To perform like he did in moto 1, you have to have a never give up attitude (most American riders are born with it, it seems), have the ability to analyze what you’re doing wrong and actually find the solution to fix it. It was very impressive and inspiring. We all thought the turning point of the championship might have been Millville but it can well be Red Bud. Martin scored the most points in Michigan but more than that, he showed his competition he was the man to beat now. He capitalized on Webb’s amateur mistakes in the ruts of the sand whoops but it’s part of the game. You gotta stay on your wheels to win. I wouldn’t want to be in Marvin’s shoes after Saturday.

What’s up with Marvin Musquin?

Marvin is riding hurt since his crash in the first moto in Lakewood. He’s nursing a sore/sprained wrist since then. In an interview I’ve heard from Marvin, he hurt his wrist again while practicing prior to Red Bud. He didn’t crash, just hyperextended it while scrubbing a jump. It’s difficult to race any Nationals with a bad wrist. But other than his injury, I don’t think he’s riding well. He was riding too much like a French rider in Red Bud. On this kind of track, you can’t ride the insides and stop your momentum. You have to keep your momentum while using lines that let you do that. Most of the time, you have to ride the outside lines. Riding like Musquin and Pourcel works on tracks like High Point and Budds Creek in the mud, not in Red Bud or Millville for that matter. He kept riding the inside line and stopping in them while Webb or Martin was railing the outsides without slowing down as much. On a soft track and on a 250, losing your speed isn’t a good combo. You can get away with it on a 450 sometimes but not on a 250.

People love Red Bud, talk about racing there and jumping the Leap and all that.

My first year in Red Bud was in 2000. Before racing the nationals that year, I got all the tapes to learn the track and see how they evolved. In 1999, Red Bud was a rock hard track! I showed up in 2000, it was a sand track. I guess they brought thousands of truckloads of sand and changed the layout. I was lost! I would’ve preferred a hard packed track obviously. As far as Larocco’s Leap, I was scared to jump it actually. I didn’t even jump it in the first Saturday practice. In the second practice, I followed Windham to do it. I just did what he did a few bike lengths behind him. It wasn’t that bad but it was very intimidating. As far as the organization and the fans, Red Bud is definitely one of the best races. For me as a rider, I never really liked it. It was too sandy, disked too deep and over watered to my taste. I’d rather ride on a hard packed Hangtown than Red Bud.

What’s your take on the GP’s right now and who should be on Team France now?

The GP’s are pretty interesting but I haven’t seen one in a while. Febvre won the last 4 and he’s leading the championship comfortably. RV, Desalle and Nagl are missing. Cairoli is riding injured and it gives other rider a chance to shine. Romain beat those guys in the second moto in Spain 5 GPs ago. They were all there but RV. Then, they all auto eliminated themselves and he won 4 in a row. If Cairoli doesn’t get back to 100% soon, it will be Romain’s title to lose. No one is close enough in the championship to catch Febvre. He came out of nowhere this season. He never really did that good in 250 but he’s exploding in 450. It’s a good story and brings some spice in a championship that Cairoli has made boring since 2009. As far as MXDN, even if Paulin isn’t doing great on the Honda this season, you have to take him. I’d put him in MX3. The 2 other French riders should be Musquin in MX2 and Febvre in MX1. In France, on a hard track in front of their home fans, they would be tough to beat even for Martin, Dungey and Barcia… And even if RV or Bubba gets the third spot!

You like to watch the races and comment on Twitter about them, sometimes people take it very seriously…does that get you sad for the human race?

My tweeting during the race is made of serious analysis and serious things I see and want to talk about. It’s also filled with s%^& stirring/second degree tweets that not most average MX fans understand. They take it seriously and start calling me out. It’s why I delete my stuff when the race is over. They’re made to be read while watching the action on TV. If you read them the day after, it wouldn’t be understood the right way. Anyway, it’s all fun and I love some good bench racing and look forward to live SX/MX races on TV and tweeting about it. I don’t represent anyone, I don’t sell anything and I don’t work for anyone so I can say whatever I want. If you disagree, no big deal, the earth is still turning…