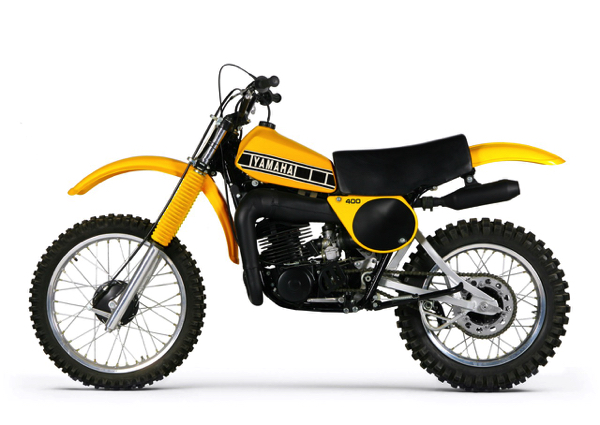 In 1975, Yamaha introduced the masses to the joys of long travel suspension with the introduction of the limited production YZ250B and YZ360B. These two “works replicas” were light, exotic and out of the budget of most weekend warriors. Based on the designs of Belgian engineer Lucien Tilkens, the new YZ’s took the sport by storm with their works-like suspension and cutting edge performance. Offering twice the travel of conventional dual-shock arrangements of the time, the new monoshock suspension was a revolution.

In 1976, Yamaha revamped their motocross lineup once again by incorporating the MX and YZ line into one machine. Previously, the YZ had been for pros only and the MX had been for the everyman racer. The new machine kept the YZ name, but not its exotic materials and sky-high price. With its air forks and Monocross suspension, the ‘76 YZ400C was still one of the most trick machines on the track, but its new personality was friendlier and less expert-oriented than its high-strung predecessor.

Amazingly, by 1977, the Yamaha Monocross was already beginning to fall behind the best suspension designs of the time. Suzuki’s new RM line had leapfrogged the YZ’s in terms of travel and performance, while incurring none of the Mono’s weight and packaging issues. By moving the dual shock’s mounts forward, the Suzuki engineers were able to increase travel, while keeping weight down and allowing plenty of cooling air to reach the dampers. With the YZ, the placement of the shock deep in the center of the frame backbone meant both that a great deal of weight was carried high on the chassis and the damper would not receive very much cooling air.

Predictably, this led to handling issues and these early monoshocks were known both for fading dampers and a nasty habit of kicking under deceleration. Under power, they worked reasonably well, but once the throttle was chopped, they tended to pitch forward and react unpredictably. This trait, known as “Yama-hop”, only worsened at the YZ’s shock got hot and the damping went away.

In 1978, Yamaha professed they had finally nailed the culprit for this nasty behavior. According to them, the problem was flex in the frame and rear swingarm. In order to combat this, the engineers spec’d a new stronger frame and works-like boxed-section alloy swingarm for ‘78. The new alloy swingarm was both stronger and lighter than the steel unit it replaced, and the engineers promised an end to the rear end hopping and swapping that had become an unfortunate YZ trademark.

For the frame, Yamaha decided to ditch the YZ-D model’s mild steel tubing and go with chromoly steel for the YZ-E. Short for “chromium-molybdenum steel”, chromoly was lighter and stronger than the low carbon steel common to most Japanese machines at the time. By switching to chromoly for the chassis, Yamaha was able to knock a full two pounds off the YZ400 for ’78. Unfortunately, even with the lighter frame and swingarm, the new D model still tipped the scales at an eye opening 242 pounds. This was portly even for an Open bike and the Y-Zed continued to be the heaviest bike in the class.

While the frame and swingarm were new for 1978, the rest of the YZ400E was largely a carryover from the ’77 D model. The motor was the same 397cc, 85mm x 70mm ground-pounder it had been in 1977. Fed by a 38mm round-slide Mikuni carb and six-peddle reed-valve, the ’78 YZ400 produced one of the most exciting powerbands on the track. Acceleration was explosive off the bottom, with a burly midrange and hard hit.  Once past the midrange, power tapered off appreciably, but from corner to corner it was brutally fast.

On the track, the YZ offered one of the most thrilling rides of 1978. Because of its light flywheel and sudden delivery, the YZ was prone to wheelies and care had to be taken not to send the front fender skyward out of tight turns. It was snappy and quick revving, but more work than the smooth and mellow Husqvarna 390CR and Suzuki RM400C. In addition to its potent delivery, the YZ’s stubborn transmission often made life difficult. It was notchy and prone to missed shifts if care was not taken to catch the next cog. Power shifting was completely out of the question and the big yellow 400 demanded the clutch when shifting. Of course, this was no easy task with the Yamaha’s hand-cramping clutch pull and many savvy YZ pilots resorted to lengthening the actuator arm and swapping the stock clutch lever for a XT500 part to reduce the effort.

In the suspension department, the ’78 YZ400E was once again largely a carryover from ’77. Pumping out 9.8 inches of travel front and rear, the new bike did receive a minor upgrade with the addition of 20mm of slider overlap in the 38mm air/oil adjustable Kayaba forks. This was done to increase rigidity by offering more surface area and smoother action when the forks were topped out. Out back, the YZ-E continued to use a single large DeCarbon shock mounted down the centerline of the chassis. While lacking the trick remote reservoir of the Factory OW racers, the unit did offer an impressive 13 adjustable settings for compression and rebound.

While most testers could not feel the benefit of the additional 20mm of fork overlap, the Yamaha’s Kayaba units remained some of the best components on the track. They offered no external damping adjustability, but the ride could be fine tuned by adding or subtracting air from the forks. Most riders preferred around 12 PSI in both legs and with those settings the KYB’s provided a plush and well-controlled ride.

Out back, the new Monocross rear offered slightly improved, but not groundbreaking performance. The new alloy swingarm reduced flex and new more slippery bushings reduced friction, but the performance of its single damper continued to be flawed.  Fading was still an issue due to its placement away from any cooling air. Without a way to sufficiently dissipate heat, the shock’s performance deteriorated rapidly after 15 minutes of hard use. When fresh, it worked most efficiently under power and test riders found that keeping their weight well back in the rough yielded the best results. While decent at taking hard hits, it could be slightly harsh on small chop and the bike continued to kick unexpectedly on rebound. Apparently, the dreaded “Yama-swap” was indeed not completely exorcised after all.

Aside from an unexpected case of the hops, the YZ400E was a decent handling motorcycle. The short wheelbase that made it wheelie-prone yielded good turning manners and the Y-Zed proved the most nimble of the 1978 Open class machines. Both the RM400C and 390CR Husky were far more stable at speed, but neither could cut under the Yamaha in the turns. Ergonomics were very good (for the time) and riders found it easy to move around on the big Yammer. Several riders commented on the YZ’s comfortable seat and the middle of the bike was much slimmer than the competition due to its lack of dual shocks.

In the details department, the YZ was pretty typical for the era, with several nice touches and a few glaring missteps. Braking front and rear was considered quite good, but care had to be taken not to allow the rear to get out of adjustment. If not set up properly, the pedal would bottom out on the frame and render it nearly useless at an inopportune moment. On the plus side, both the stock clutch and brake levers featured zoot capri indentations that were designed to fit your fingers. Very trick and comfortable.

Due to the design of the engine, the countershaft was several inches from the swingarm pivot and this led to issues with the chain rollers. At full extension, the top roller was put under a great deal of strain and broken rollers were common. Worst of all, when the roller expired, the chain liked to chew directly into the intake boot, allowing a direct shot of terra firma into the top end, ugh. Of course, the YZ’s airbox did not need a lot of help in this department, as the stock filter was pretty much worthless. When new, it sealed poorly and after a few cleanings, it was guaranteed to come apart in your hands. JT Racing sold a lot of Phase 2 Filters in 1978.

Overall, the 1978 Yamaha YZ400E was a solid Open class offering. It could have used a longer swingarm, and a remote reservoir for the shock would have been nice, but it was capable of winning races in stock form. It was plenty fast and offered an excellent set of front forks, but its sudden delivery and slightly wayward handling made it harder to manage than the best from Europe. If you liked your big bore with a decidedly Nipponese flavor, it was a good choice, but if absolute performance was your top priority, there were better Old World alternatives available.