A Tale of Two Toolboxes 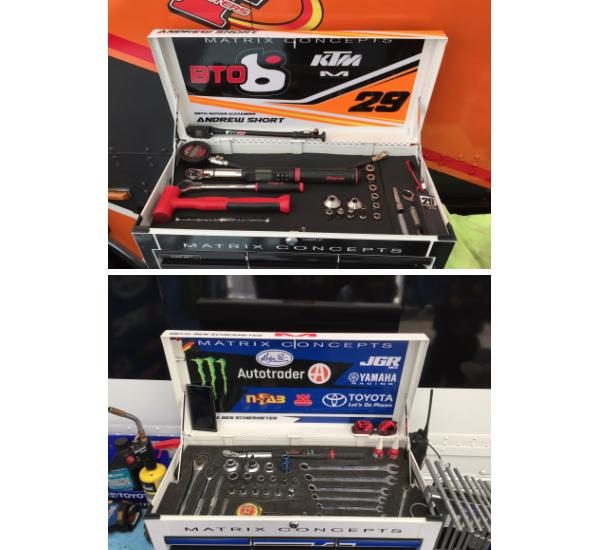 A tale of two toolboxes.

A tale of two toolboxes.

There is an unspoken rule that you don’t open the drawers of another man’s toolbox it’s comparable to looking in a women’s purse or cooking on another man’s bbq.  I’m not very good at following rules; I view them more like guidelines.  I’ve always wanted to take a peek inside the trick looking toolboxes underneath the tent with the custom stickers proudly displayed next to their riders bike.  What’s hidden in those drawers?  What tools does a factory mechanic use to keep his riders nuts and bolts tight?  Thanks to Nathan Alexander of BTO and Ben Schiermeyer of JGR for letting me take a peak up their skirt so to speak.

Do you remember your first toolbox or tool set?

Nate:  Not necessarily, but MMI supplied me with my first real tool set, but it was stolen a year later.

Ben:  I started buying tools when I was 13 or 14.  Don’t remember my first box but still have some of the tools I bought back then.

Who’s most likely to borrow one of your tools and not put it back?

Ben:  Either Bundy or big John.

What’s the last tool you bought?

Ben:  Dewalt cordless drill and impact for my house.

When was the last time you stripped or cross threaded a bolt?

Nate:  I’m not strong enough to strip bolts out but I can cross thread with the best of them. I believe the last time I did that was at LMC Honda on the carbon fiber tanks.

Ben:  Had a motor mount strip out last week while testing.

What is something on the bike you give a little extra attention that separates your bike from the other guys?

Nate:  Everything gets extra attention.

Ben:  I build every bike with love.

Which of the riders you’ve wrenched for was the worst mechanic?

Ben:  I don’t think any of them really knew how to work on bikes much. Phil may be the best rider/mechanic.

Wash an air filter or just throw it away?

Nate:  Dt1 air filter service or I wash them and oil on my own. I don’t like to throw things away.

Ben:  Ain’t nobody got time to be cleaning filters.

Favorite thing to right on a pit board?

If you had to be a mechanic in any other career field what wood it be?

Who is the GOAT of wrenching in moto?

Nate:  I don’t believe anyone is the greatest of all time. Maybe the greatest to this date, but to say “all time” seems ignorant. A few guys I really respect though are Goose and Tony Berlluti. I love their attitudes. They just get it.

Ben:  I mean you have to say Goose here right?

Thanks for reading, please send complaints to jasonw@racerxill.com