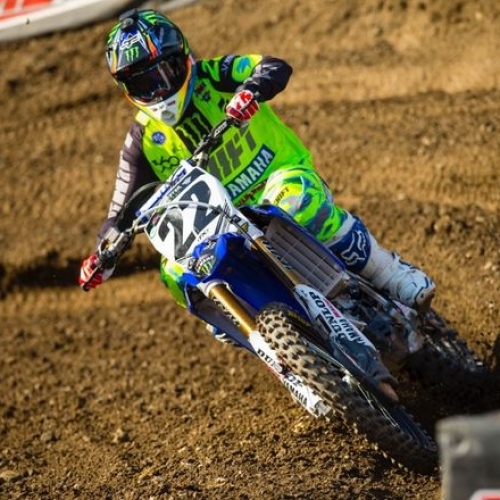 We fill you in on what’s new for the Factory Yamaha team in 2017.

We fill you in on what’s new for the Factory Yamaha team in 2017.

Welcome to the offseason and our new ongoing “Team Previews” column. Every week from now until the Monster Energy Supercross season starts in January we will be profiling a big team in the sport. We’ll go through the changes that have been made, analyze results, and give each team a grade on all of their offseason moves. This week we have Monster Energy/Yamalube/Chaparral/Yamaha Financial Services/Factory Yamaha.

and you will find the full schedule below.

Reed – Did not race.

The factory Yamaha team component returned for 2016 with a supercross only deal for Chad Reed. For 2017 the team upped the stakes and hired the top prospect graduating from the 250 class in Cooper Webb. A team of Reed and Webb certainly garners the highest offseason grade of all of the teams. It also doesn’t hurt that Yamaha added thirty million title sponsors and now goes by the name of Monster Energy/Yamalube/Chaparral/Yamaha Financial Services/Factory Yamaha.

What is really cool about the new look of the Factory Yamaha team is that they haven’t gotten rid of any riders and have added one to the mix. This is the only team that has officially added an extra rider instead of downsizing.

Where Webb finishes in his rookie season is the part where I’m stuck. I know he’s the best rider to step up to the premier class in quite some time, but how long is his adjustment period? It all depends on whether or not he gets hurt early in the season. Does he stay healthy and do as well as Ryan Dungey did in 2010 when he stepped up to the class? Or, more realistically does Webb go the Tomac and Roczen route where they were race winners right off the bat, but not championship contenders?

For the most part we are only analyzing the supercross season right now, but Webb will be racing outdoors, while Reed sticks to supercross only. It’s very hard to gauge what is going to happen during the motocross season when we haven’t seen what the stadiums have to offer. It’s simply too far away and so many injuries are going to take place from now until May unfortunately.

All eyes will be on Webb this year and his new career #2. He will win a couple of supercross races and will make the podium more than a handful of times, but I don’t see him stopping Ken Roczen or Ryan Dungey from winning the title. Eli Tomac will be up in the mix as well, however I don’t see him a huge threat for the SX title like he will be the outdoor title. In simpler terms, Webb will not win the supercross title in 2017, but he will win and see a lot of podiums. Don’t forget how fast he’s been at the offseason 450 races the past year and a half. He’s been impressive and I’m trying to be realistic on these rundowns.

Webb has a certain drive inside of him that I can only compare him to his new teammate Reed. If you count him out he will show you that you made a huge mistake and make you look stupid. This drive is why I stopped counting out Chad Reed after the 2010 season. Reed will win a main event this season as well and it will probably happen in San Diego.

I know you’re probably reading this and thinking I’m an idiot for labeling all of these riders winners in SX next season. I can somewhat agree, but with the talent of Roczen, Dungey, Tomac, Webb, Reed, and Jason Anderson how can you say all of these riders won’t at least get one win? The Factory Yamaha team hired two winners and it’s clear to see that they aren’t playing for anything else but a championship.

Another thing we need to touch on is the fact that this could very much be Reed’s last season. We need to enjoy him while we’ve got him people. Imagine being in your mid-thirties, on a factory bike, and still be considered a race winning threat. If Reedy can find his old school podium consistency then I won’t bet against him to be in the top three in points. We shouldn’t see a single rider dominate this year unless Roczen adds more to his game in this offseason. We’ll have to wait and see how the chips unfold.

One thing that is for sure is that you can’t ever count out Webb and Reed in anything. These are the type of guys that would run thirty miles, lift weights for three days straight, and drink a five-pound milkshake right after just because you told them they couldn’t.

Yamalube Star Racing Yamaha is next.