If ever there was a rider version of the old idiom “ a riddle wrapped in a mystery, locked inside an enigma”, it is Christian Craig.

Christian is indeed an enigma. Ask anyone who knows anything about racing in the years that he has been on the professional stage, he’s on the short list of most beautifully formed natural riding styles ever. He’s one of those guys who just looks effortless. A Windham, a Hansen and as of late, a Sexton.

With that incredible riding grace, one would think success, victory and Titles would be the natural extension and at times, there have been glimpses and even attainment of some of them but on the whole, history has shown there is just something keeping them at arms length. Christian has been at this a while and has always found himself a fan favorite with that magnetic style, GQ-looks, friendly personality and honest representation of himself. He wears his heart on his sleeve and puts it out there with his Raceday VLOGS ( I don’t watch vlogs but I know they are a hit with a pretty big crowd {yup I’m old}).

I can’t nail down what it is but I know I can’t be the only one who gets that sense that Christian wears this invisible cloak of always feeling like the other shoe is about to drop and for everything that goes good for him, it has to be short-lived and it’s going to sour just as quickly. It really bums me out because it doesn’t have to go that way. It’s a mental hurdle that is difficult to overcome but MUST be overcome. You could hear it in his voice at Houston 1, that victory meant everything on the mental scale. It was the affirmation all riders strive for and NEED for validation of their effort and their self worth. It was oddly confusing to hear him speak of people counting him down and not believing in him because in my mind, everyone has always hoped Christian will connect the dots and KNOWS his capability is there if he can just keep those mental checkpoints aligned. He is his own biggest critic and his own biggest roadblock to what he yearns for.

At Indianapolis 1, in the closing laps of the main, the contact which occurred between he and the 18 of Jett Lawrence COULD have been next to meaningless but as tends to happen in these races, one small, nearly imperceptible detail can change everything. In real-time watching Jett Lawrence recover from two early errors and charge his way forward through the pack, what seemed impossible initially became inevitable; he was going to catch Christian Craig to make a push for the runner-up spot on the results sheet. Christian had to have been made aware of this by either his mechanic or experience-intuition and as the 18 closed through the rhythm section prior to the whoops, Christian had a slight hiccup that made it apparent to both riders that Jett’s run on the outside had a real chance of working to slip by Craig on the entrance to the whoops. Craig had one shot to maintain 2nd place and that was to push wide and slow Jett’s momentum. In my mind, this move was a necessity. With two corners to go, being on the inside or not, if Jett got a wheel on Craig, Jett’s momentum would be enough to take the upper hand through the checkered flag. 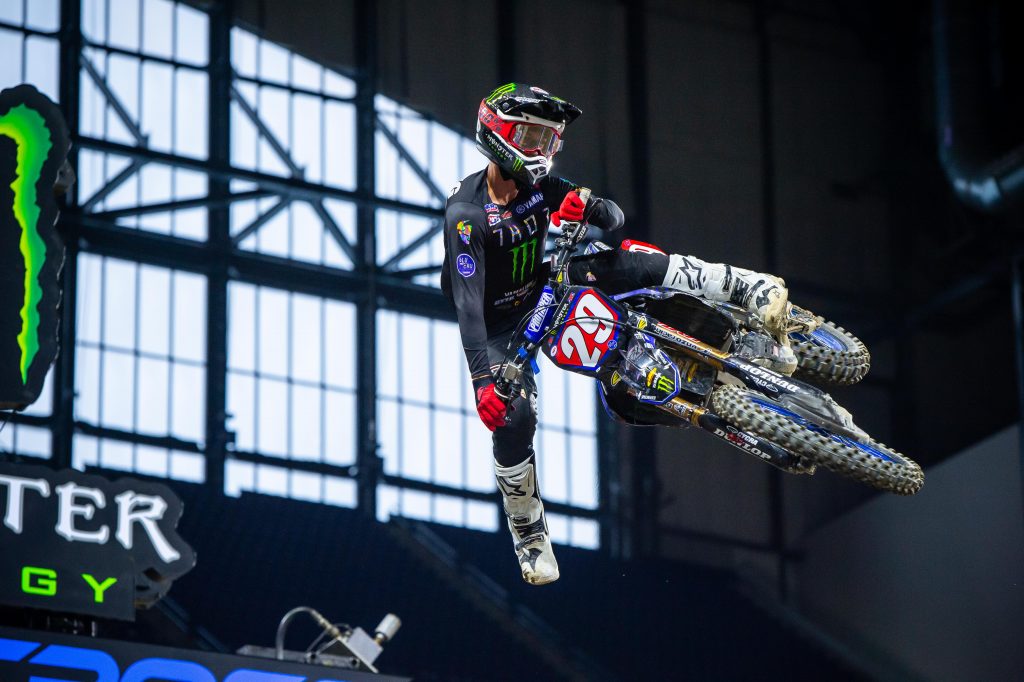 Leave the past behind. Start today.

Then the lock-up happened.

This is where optics mean everything. Christian’s past is well known. The struggle to find consistency, the knack for little mental hiccups that fight that goal of consistency and in real time, it looks like Craig made a choice to not only initiate contact with Jett but to drive it in so hard, pushing to the tuff-blocks, that they both ended up off the track and in true Christian style, with himself getting the most sour end of the exchange. It looked like Craig again mentally locked up and sabotaged his podium spot with a decision that should be saved for an “Osborne-Savatgy-style” showdown in a series ender.

What everyone (other than Chad Reed apparently) saw in real time was the classic Craig blunder. When Jett crossed the finish-line his despair was apparent to everyone. He had no anger toward Craig. It was self-disappointment and the masses were a little surprised. Even in his 4th place tv interview, Jett conveyed no words of negativity toward Craig. Again, surprising. Upon further conjecture and inspection, it became known that the bikes locked together and that initial choice to push wide escalated into an unavoidable law of nature and physics. It happens in racing, man and machine can lock together leaving only the contact with the ground to separate them. Of course this would leave the 29 on the ground, it’s just the way that story has historically unfolded.

Jett wasn’t harboring any angst toward Craig because it was the decisions of both riders, combined with the freak-chance of the bikes locking together that brought on this result. The result being both riders off the podium. Jett was immediately overcome with emotion, while Craig simply crossed the finish line and rode back to the truck, no doubt thinking, “not this shit again…” but he’s got to let that go. The optics of what took place initially have nothing to do with the reality and the quicker Christian lets that go, the quicker he can let Indianapolis 2 get started with a fresh slate.

Christian has to separate his past from the future he is capable of creating in real time. It’s as simple as that. Forget everything that has happened before. Believe in himself and what every fan knows about his skillset by watching him. Perception is reality and human memories are extremely short; Christian is fully capable of altering perception and creating his own successful evolution starting TODAY.