For this edition of Classic Ink, we are going to take a look back at a great Yamaha ad campaign from the heyday of sport ATVs here in America. 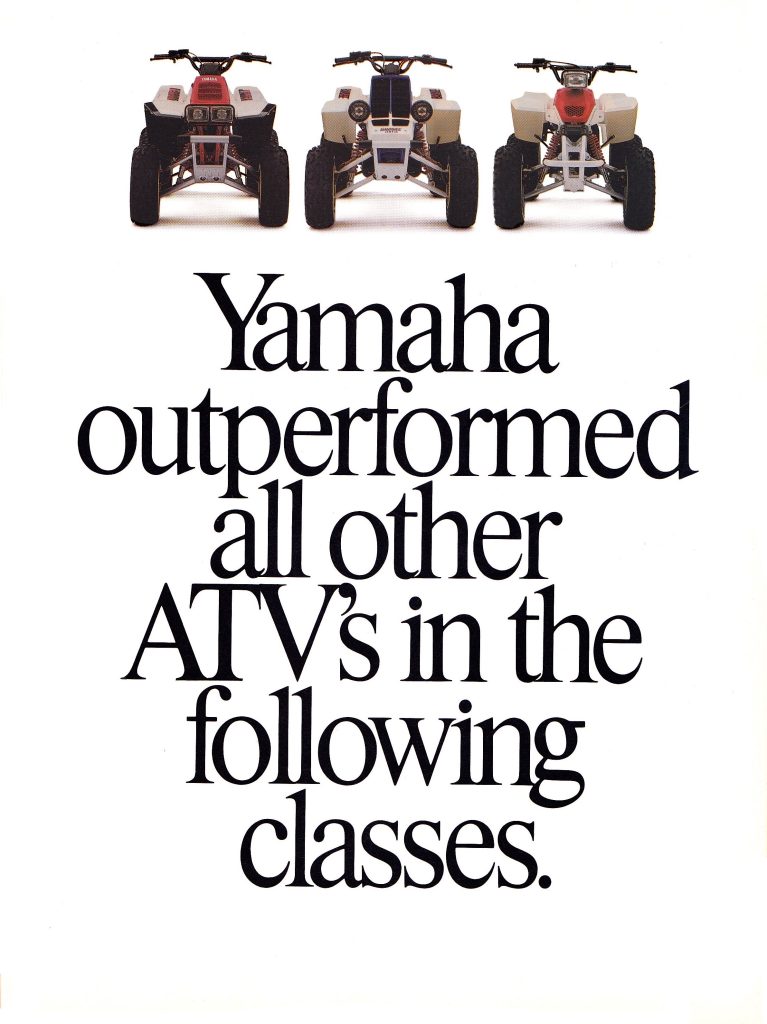 Performance ATVs were big business in the 1980s and Yamaha had the most interesting lineup in the sport in 1988. Photo Credit: Yamaha

The 1980s were a tremendous time to be a sport ATV enthusiast. The sport ATV boom had kicked off with the introduction of Honda’s revolutionary ATC250R in 1981 and had escalated quickly as the other Japanese manufacturers jumped at a chance to capture a slice of the lucrative performance ATV market. Kawasaki entered the fray in 1984 with their KXT250 Tecate and Yamaha joined the fun in 1984 with the introduction of their TRI-Z250.

In 1985, Suzuki entered the market with the introduction of their first high-performance ATV, the LT250R Quadracer. Powered by a liquid-cooled two-stroke single, the Quadracer broke with tradition by adding an additional wheel that greatly improved stability. While not faster or better suspended than its three-wheeled rivals, the Quadracer’s improved handling characteristics immediately propelled it to the top of the performance ATV heap. 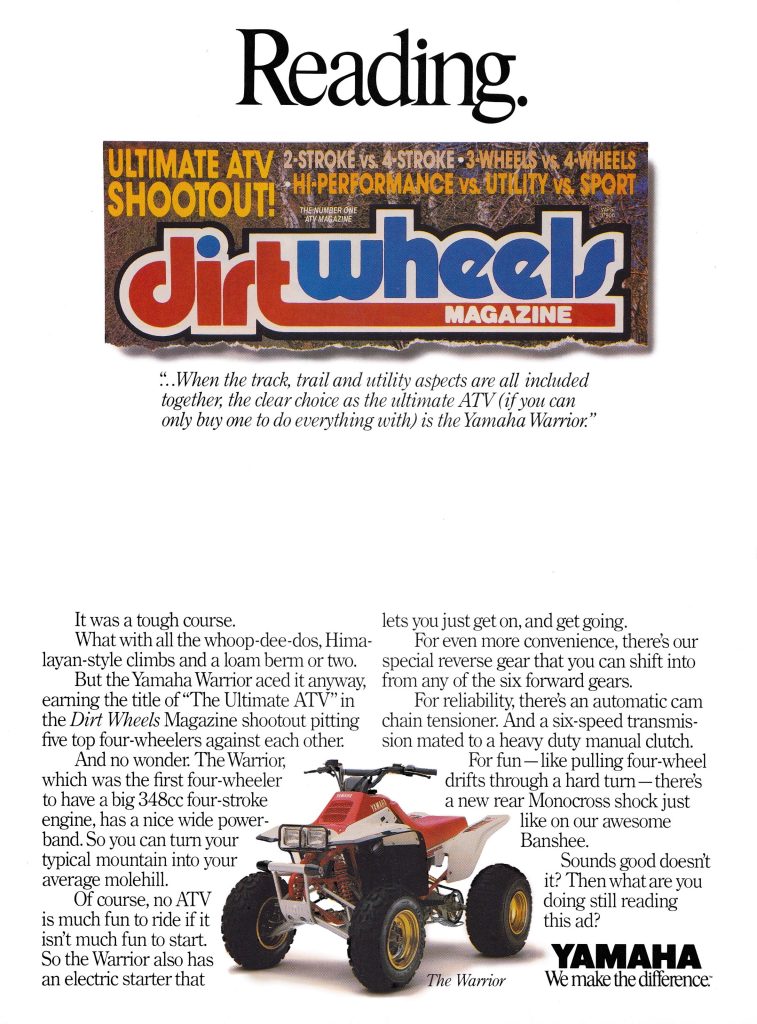 With its torquey 348cc SOHC four-stroke mill, electric starting, and reverse, the Warrior was the Cadillac of the performance ATV world in 1988. Photo Credit: Yamaha

By 1987, the nail was thoroughly in the coffin for three-wheeled ATVs in America. Media backlash and government pressure over the inherent instability of the three-wheeled machines led to the demise of all but a very few models. In most cases, the manufacturers moved their existing ATV lineups to a four-wheeled platform. The Honda ATC250R became the TRX250R Fourtrax, the Big Red gave way to the 4×4 Foreman, and the KXT250 Tecate became the KXF250 Tecate 4.

At Yamaha, the move to four wheels was met with the introduction of the most unique lineup of sport quads in the business. Instead of shoehorning their proven TRI-Z 250 motor into a four-wheeled chassis, Yamaha chose to dodge their 250 competitors by offering something completely different. For their version of a sport quad, Yamaha preferred to lean on their several decades of two-stroke street bike experience and introduce a completely new type of machine.

The all-new YFZ350 Banshee eschewed the traditional two-stroke single in favor of a 347cc twin-cylinder design similar to many of Yamaha’s street-only performance machines. The new powerplant was a cousin to the legendary RZ350 motor, but it did lack the more sophisticated Yamaha Power Valve System (YPVS) employed on the Kenny Roberts replica machines. This unique powerplant gave the Banshee a melodious exhaust note and made it a favorite of desert and dune enthusiasts who loved the machine’s top-end performance. The Banshee’s lackluster low-end torque and added weight (nearly 50 pounds more than its 250 competitors) made it less appealing for motocross and woods riding, but out in the great wide open, the shrieking Banshee was King. 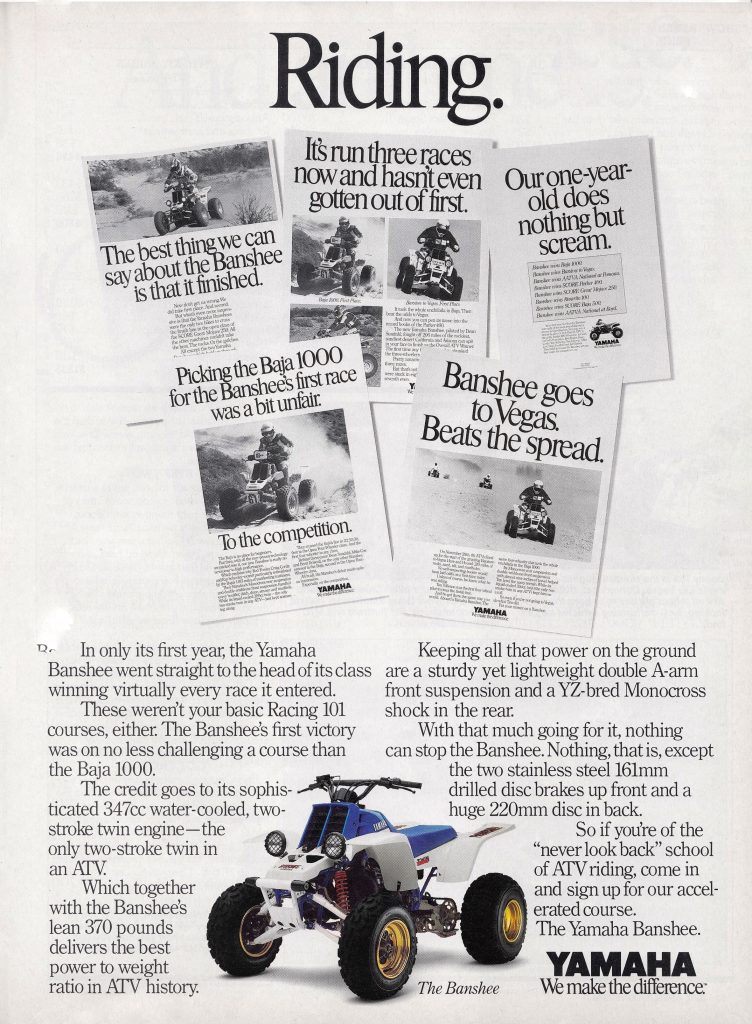 Instead of going directly at the 250 competition, Yamaha chose to swerve and capitalize on their heritage of blazing-fast two-stroke twins. In 1988, no other ATV ran, sounded, or performed like Yamaha’s high-revving 350 machine.  Photo Credit: Yamaha

On the four-stroke front, Yamaha once again chose to blaze their own path by going big in 1987. Instead of building a 250 to go head-to-head with the Suzuki Quadsport 230 and Honda Fourtrax 250X, Yamaha dialed up a big-bore alternative with luxuries like a reverse gear and electric starting. At the time, these were features more commonly found on 500-pound utility machines. The all-new YFM350X Warrior crashed the Honda and Suzuki’s party with a torquey 348cc SOHC single that easily outpowered its smaller rivals off the line. With its Mono Cross rear suspension and long-travel front shocks, the Warrior was also a very capable handler although both the 250X and Quadsport were better turning and nimbler through the trees. Like the Banshee, the Warrior was quite a bit heavier than its rivals and that hindered it somewhat when the going got tight. Big torque and lots of conveniences were the Warrior’s stock-in-trade and eager buyers snapped up the versatile thumpers in droves. 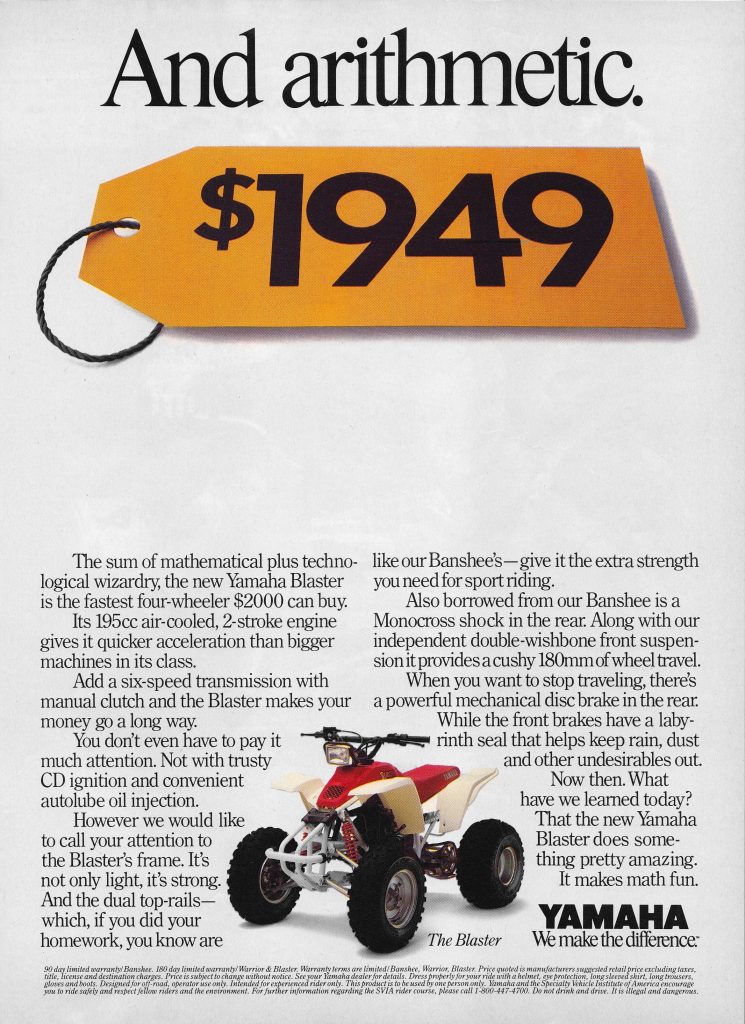 Adjusted for inflation, the 1988 Yamaha’s Blaster’s $1949 retail price still boggles the mind at an incredibly affordable $4439. For that money, you got a sporty, quick, decently suspended, and stone-reliable mount that could go anywhere and do nearly anything. Out of the box it was an incredible bargain, and with a few mods, it was a surprisingly capable racer. Photo Credit: Yamaha

In 1988, Yamaha filled out its trifecta of sport machines with another outside-the-box offering in the form of the all-new Blaster 200. Using a 195cc two-stroke single derived loosely from their IT200 Enduro machine, the Blaster was easily the best value in off-roading in 1988. Coming in at a very reasonable $1949, the Blaster was much more about fun and affordability than absolute performance. Unlike the Warrior, there was no electric starting or reverse and the brakes were only adequate with dual drums in the front and a mechanical disc out back. The short wheelbase and peppy motor gave the Blaster a very sporty feel and its performance envelope was wider than its price might have you believe. It was plenty quick enough to keep up with the four-stroke 250s and almost as easy to ride. The short wheelbase and bargain shocks hindered its handling in the rough, but the Blaster was more than capable of keeping up with much larger machines. Despite its humble origins, the Blaster proved to be the rare case where the whole was greater than the sum of its parts.

In 1988, Yamaha had the most interesting and diverse sport lineup in the ATV world. The Banshee, Warrior, and Blaster all aimed to hit the competition where they weren’t. All three offered unique takes on the sport ATV formula and would go on to become off-road icons over the next decade. Long after the competition had given up on the sport market, the Yamaha trio would soldier on as the sole holdouts of ATV performance.