Tell Us Another Story, David Pingree 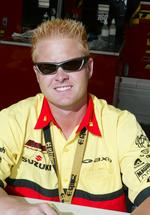 “This head shot is from 2003 and is more than a little troubling. I’m not sure what the hell was going on with my hair at that point but it wasn’t good. That was basically my last year of full-time professional racing.”

“This photo looks like it is from Steel City in 1999. I pulled the holeshot in this moto and the only guy that passed me was, guess who… one Richard Carmichael Jr.who was on a bit of a hot streak. That streak of his would last for the next seven years. Anyway, this was a good race for me. I was riding for the Primal Impulse/Suzuki team and our bikes were amazing that year. I honestly think our bikes were as good or better than anything else out there that year. I won the Minneapolis supercross that season and Michael Brandes and Brandon Jesseman also had some good rides that year. The other guys visible in this shot behind me and Ricky are Casey Johnson, Brock Sellards, Stephane Roncada, Danny Smith, Brandon Jesseman, Casey Lytle and the 955 is Euro rider Carl Nunn.

I ended up third overall that day behind Carmichael and Roncada. It’s odd to see Ricky on a Pro Circuit bike with Fox gear on. That team was AXO through the first bunch of years and they’ve been Thor ever since. The only two riders to ever get out of that deal are RC and Mickael Pichon who had a contract with JT Racing when he moved stateside. Just a little random fact for you there.

The other thing that sticks out in my mind about this race involved Bevo Forte of Scott Goggles. He was out on the track at the top of the first turn waving his arms and yelling for me. He was stoked that I was up front and he tells me to this day that that was the last time he’s out on the track waving someone on like that. Bevo is good people.”