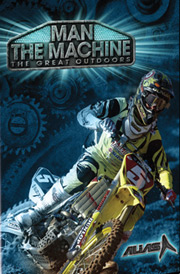 Im tired of saying “Swizcore here” but until this publishing system shows an author, I kinda gotta.

Right off the top Im gonna be honest(shocker right), I am a TGO slappy, I’ve bought every single DVD including all of the Special Editions(I’m sad to see the S.E.’s go away but they really aren’t necessary with the amount of candid personal interviews they include in the DVD now; plus we get “The Moto” on Fuel).
I used to wrestle with which story telling technique was better; to cover the 450 series fully and then start from the top with the 250’s or go race by race covering both classes. No more. I agree with the direction they’ve chosen, It’s much easier to focus on the rider’s stories and struggle’s one class at a time. Telling both classes stories simultaneously would fragment the viewers focus far too much. Starting off, there’s a movie trailer style introduction of the DVD.  It serves its purpose, to build excitement and interest for the story to be told.

I used to miss the hillbilly announcer from the ’03 era TGO’s but now using Rob Buydos’ actual race commentary just makes good sense.  Add to that, interspersing of rider, wife, girlfriend, team personnel thoughts and you have the perfect formula to cover all details for each of the story-lines which popup at every single race. That’s a major factor in the success of  TGO, identifying the key story at each race and highlighting that story while presenting an overview of that weekends action.

The cinematography continues to improve with each new release and this iteration has taken a bigger step forward from the prior year than any other.  Lots of tilt-shift technique throughout and yes its a hot trend right now but that doesn’t mean it isn’t effective, it absolutely adds to the scenes where it is used.  The soundtrack is buried under the story for the most part but thats how it should be in a documentary, the soundtrack should play an assistive role in telling the primary story, not fight with it for attention. Other types of riding videos call for other techniques.

I do have two criticisms of Man the Machine. I think the packaging is lackluster and not at all representative of the product inside and I wish the 450 races after the title was clinched were covered, there was still drama and stories even though the title was locked up. Both of these issues are small potatoes and you’d be nuts to not buy this DVD. But what do I know, if you ask me the TGO franchise should be called “The Super-Freaking-Coolest MX Season Review You Could Imagine”.  Hmm, doesn’t really roll of the tongue.