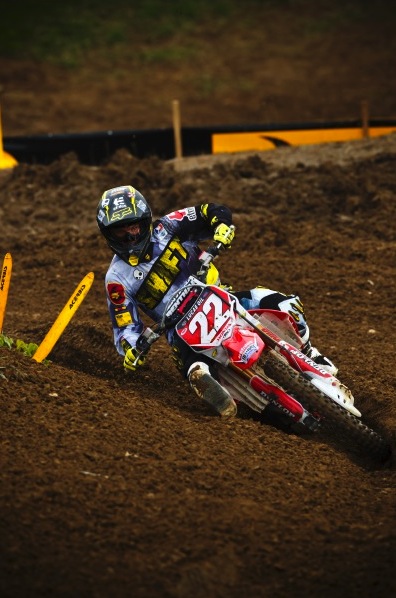 It’s my corner and I’ll cry if I want to.

It’s my corner and I’ll cry if I want to.

Stick with me here, it’s a winding road but just like Rand McNally Watson, I guarantee arrival at my destination.

(I may even say goodbye when I get out of the car.)

One thing I’ve always hated about our sport is there has never been a shortage of jackass fans who will always find a way to criticize the seemingly unobjectionable. It never fails, the most inconsequential act or occurrence will be taken to task by some disenfranchised fan who just has to take a stance as the vocal opposition to the predominantly supportive masses.

Something transcendent happened in Millville.

It’s been written and talked about ad-nauseam. Chad Reed used to be, pretty much universally, thought of as a bit of a dick. Matthes theorizes that it was a result of immaturity compounded by big money at a young age. Add to that a disdain in Reed’s gut for an American race industry which thumbed it’s nose at him years earlier; a time when he felt his results during an abbreviated debut in the American series warranted a permanent stay.

Could you blame him? Especially in moto where racers are constantly creating false realities in their cranium to add to that fire in their belly; the motivation they draw from to focus in and obliterate the track and their competitors. When performed optimally of course.

So here we are, give or take 5 years from when that reputation was at it’s peak. Chad was starting to be looked at in a different light in ’09 when he rode for Suzuki. He kept James honest, won the outdoor title and spoke candidly when questioned. A dismal follow-up, the ’10 season where the promising step forward from ’09 took a body shot when a broken hand abbreviated his winter series, sickness cut his National series short and you have a big question mark leading into this season. The Reed “support pendulum” received a giant momentum thrust when he made the decision to fund and build his own team for the ’11 season. Millionaire or not, a racer stepping away from the factories and committing to go it alone is a sure way to cement the support of your bandwagon followers and make your detractors go “hmmm”.

So as the 2011 winter series forged on, Chad’s interviews and personable presence at the races spun everyone for a loop. He was gaining fan support at an unheard of rate. Still, there were the hold-outs who would say, “ehhh, he’s still a dick, don’t be fooled”. But more and more as the season trudged along, his supporter’s new and old would suppress the reluctantly vocal minority. Everyone and I mean EVERYONE was expecting Reed to slip up and have that goodwill killing interview on an off-night when he was frustrated and the result unacceptable.

Say hello to Dallas SX when you would have sworn Reed had a bulls-eye butt patch when James lined it up and crowned his ass. That action brought Reed from 2nd and gaining on Canard, to an 8th place finish. The stage for the perfect storm was set, Reed was obliterated by his nemesis, 9pts ripped from his grasp, hurrrrting from a footpeg and the stadium floor and up comes Erin Bates as Chad is rolling to a stop and pulling his helmet off. Reed could not have handled it better. Following that interview, the bandwagon was so full it needed “Matthes-springs” and a revalve.

There are two things a top level racer can do to endure themselves to the sports’ core racers which trump everything. The first is committing to racing a 2-stroke but that’s just silly. The other is exactly what Reed did, making a calculated effort to get his fledgling team committed to racing the full outdoors schedule. Case closed. Reed who once embraced a SX only contract was feverishly pressuring his representation to keep him working all summer.

Still with me? You’re a trooper.

So now we’re at Millville and the singular transcendent event which inspired this tangent-riddled article.

The unprecedented growth rate of Chad Reed support reached it’s pinnacle the second his motionless body twitched following his spectacular crash. The moment he picked himself off the ground would have had Rudy himself inspired. To actually remount, kick his bike to life and rejoin the race?! Rocky himself(or Rambo if you’re @vegaskdub) was calling his agent lining up the next ill-advised sequel.

Seriously. Talk about inspiring. Of course, there were references to the crash on Twitter before I actually saw it and even being keen to what was coming, when I saw it, I got a little choked up when I saw him get up and get after it so quickly. Don’t get me wrong, I’m not talking water-works like @chris__holliday but without question, I was in awe and inspired.

There’s something about Chad’s crash which makes his resiliency even more admirable than other hard crashes in my opinion.

Most crashes don’t allow for a contemplative period before impact and subsequent pain set in, not in the duration of this crash at least.

Flying through the air like he did allowed Chad to consider his fate. When presented with the prospect of your own mortality and in a sense, have your life flash before your eyes, I’d imagine motocross and series points become quite trivial. Only Chad knows what was going through his head as he lie on the ground after impact but one thing is clear, his final thought was “get the eff up and get those points”.

In golf they say the game is played on a 9″ course between your ears, it’s true of all sports and in moto that is where the difference is made. Which is to say, it’s a mindset shared by champions such as Reed, RV, Dungey, RC, McGrath(and so on) that leads to the elite rides, not the other way around. The chicken(rides) did not come before the egg(mindset). The racer’s who make up the 40 man gate are all crazy-gnarly guys but it’s actions such as Reed’s following this highlight reel crash which separate the the guys at the top level of the sport from the rest of the field.

So where does the transcendency come into play?

The verdict is in and it’s universal support of Chad Reed’s incredible heart. Tapping into his Aborigines roots and rebounding much like a boomerang. Even the most vocal of his detractors can’t argue with his toughness. If you do, you are a straight-up idiot. Chad Reed has unified fans of moto across the board on one thing. He’s a crazy-gnarly racer with the heart of a lion who’s focus is unshakeable.

There were a few other story-lines coming out of Millville which have of course created opposing sides but in the spirit of Moto solidarity, I’m turning a blind eye to them and instead focusing on the event which brought unity to us as moto-superfans.

This is my destination and where I get out.