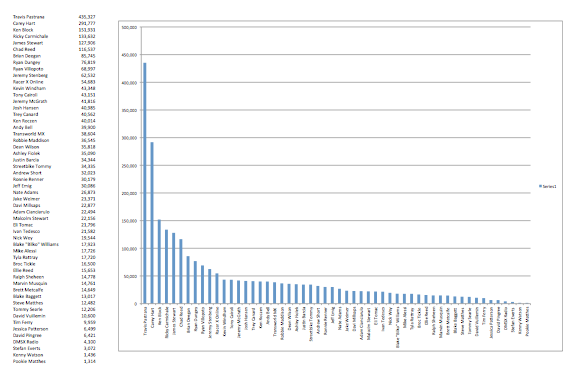 PulpMX reader Levi Gilchrist put together this interesting look at the Social media side of our sport. He even took notes and made a graph! Fun stuff.

PulpMX reader Levi Gilchrist put together this interesting look at the Social media side of our sport. He even took notes and made a graph! Fun stuff.

The sport has been overtaken by Twitter, the social network way of letting people know what’s going on in your life, where you’re at and what’s new. As long as it’s 140 characters or less. Think of it like a giant text message to people. I thought it would be fun to take a look at the number of followers some of the moto-connected people have and put up a ranking.

1. Travis Pastrana (@TravisPastrana) – TP #199 on the bike, in the car or whatever he is racing that day but #1 in the twitter rankings and your heart. At over 400K his is by far and away the leader on the moto twitter boards.

2.Cary Hart (@hartluck) – quite a few behind our leader Pastrana but still way ahead of the other top moto guys such as Stewart and Reed. Who knew a tattooed punk scumbag would rise to such heights. Interesting note: his wife Pink (@Pink) has 9.4 Million followers and is ranked 24th most followed person out of everyone on Twitter!

3.Ken Block (@kblock43) – Ken Block has too much money and too much fun. You wish you were him. You need to stop what you are doing right now and watch Gymkhana 5. Like now.

4.Ricky Carmichael (@RickyCarmichael)- The first true full time moto guy on the list. Even though he has been retired for a million years and moved out of the sport he is coming back to moto in a big way. Rumored to be with the Hart and Hunting team next year…

5.James Stewart (@js7) -James ranked second on the list and is not far behind Ricky. Will their rivalry ever end?

6.Chad Reed (@CRtwotwo) – Chad loves to stir the pot with his twitter post and cause controversy. He is not afraid to speak his mind which is the way it should be.

7.Brian Deegan (@mmgeneral)- Global domination on and off the motorcycle. Brian is a marketing genius who is laughing all the way to the bank with what he has turned his Metal Mulisha brand into.

8.Ryan Dungey (@RyanDungey) – Steve’s favorite rider to interview. Oh wait maybe not. Regardless he is killing it right now and looks to be bringing KTM their first premier championship in America.

9. Ryan Villipoto (@RyanVillipoto)- I am surprised Ryan doesn’t have more followers. He has a very interesting sense of humor. Check him out.

10.Jeremy “twitch” Stenberg (@twitchthis) I bet you thought that the first Jeremy on this list would have 72 SX wins. You are wrong. X-Games best whip contest “Twitch” is ahead of “The King”

13.Tony Cairoli(@Antoniocairoli) The first Euro on the list. A really nice genuine guy who has been dominating Europe forever now.

15.Josh Hansen (@joshhansen100) Josh is ahead of a lot of racers that have had better careers than he has. Just goes to show that he is great at marketing himself. Love him or hate him the numbers don’t lie.

16.Trey Canard (@TreyCanard) Could there be two more polar opposites this close in the rankings than Hanson and Canard? Maybe they will rub off on each other and Trey will get full sleeves and Josh will start going to church. Don’t hold your breath for either of those things to happen.

17.Ken Roczen (@KenRoczen94) Euro number two but the first 250 rider on our list. Ken is a funny kid that always has some interesting posts.

19. Transworld MX (@twmxdotcom) The second no human on the list. TWMX holding it down inside the top 20.

20.Robbie Maddison (@RobbieMaddison) RedBull crazy man. He has the skills to do distance jumping as well as lots of other crazy special one off ideas.

21. Dean Wilson (@DeanWilson15) 250 rider number 2 and first Scottish entry. At least that is where we think he is from.

22. Ashley Fiolek (@AshleyFiolek67) This girl is a beating a lot of top name guy riders on this list. They may have her covered on the track but she is holding her own in the twitter rankings.

23. Justin Barcia (@BAMBAM1EX2) Not scared to rub on the track Barcia will speak his mind on twitter as well. Look him up.

24. Streetbike Tommy (@StreetBikeTommy) Gained his fame by jumping over Pastrana’s foam pit on his streetbike. Like right over. Like landed to flat from way up in the air. YouTube it. Crazy stuff.

25.Andrew Short (@AndrewShortMX29) A really nice guy with clear eyebrows. Serious they are clear. You can’t see them.

26.Ronnie Renner (@rendawgfmx) Cleared a 47ft bar at X-games step up. That is really high in case you didn’t know.

28. Nate Adams (@NateAdams741) Started a glove company with some buddies called Deft. I think he rides freestyle in his spare time as well.

29.Jake Weimer (@jakeweimer21) Rides a green bike. Has a really small head. Check his helmet size next time you see him.

30. Davi Millsaps (@DaviMillsaps) The Duke! Not John Wayne. This one rides a dirt bike not a horse.

31.Adam Cianciarulo (@AdamCianciarulo) Just a little guy. But he is way faster than you are on your heavily modified 450 that puts out 65HP and you had to take a second mortgage on your house to buy.

32.Malcolm Stewart (@Mookie_37) Best twitter name ever. How do you beat Mookie? You can’t. So don’t try.

33. Eli Tomac (@elitomac) His dad used to race BMX or something.

34.Ivan Tedesco (@ivantedesco) Hot sauce is the name. Moto is the game.

36.Blake “Bilko” Williams (@Bilko22dotcom) Good old Aussie boy from down under. Likes to do big tricks on his dirt cycle.

37.Mike Alessi (@mikealessi800) Holeshot king! He is lighting quick off the gate. Just ask his dad.

38.Tyla Rattray (@tylarattray)Bear witness to the fitness. This guy isn’t going to lose a race because he got tired that is for sure. They play rugby where he is from. Tough as nails.

39.Broc Tickle (@Broctickle) He has a relative who is red and named Elmo I have heard. Broc is much faster than the fuzz ball is on the bike though.

40.Ellie Reed (@mrstwotwo) Chad’s wife as well as team partner. She has collected quite a following of her own. Her twitter gives a unique perspective.

41. Ralph Sheheen (@ralphsheheen) The other part of the broadcast team with Fro.

42.Marvin Musquin (@MarvinMusquin25) World champ so you know he is for real. Look for big things next year if he can stay healthy. Fluid smooth riding style.

43. Brett Metcalfe (@bmetty24) A hard worker who could use some good luck right about now. Injuries suck.

44.Blake Baggett (@blakebaggettbb) Typing this makes me crave bread. Not sure why…

45.Steve Matthes (@pulpmx) Our very own Steve Matthes. If memory serves me correct he was engaged in a twitter battle with Adam Cianciarulo not that long ago to see who could reach 10K followers first. How is that working out for you Steve?

48.Tim Ferry (@therealreddog) Won a moto at Budds Creek against the great Ricky Carmichael. Also beat Jeremy McGrath at summer cross. Had a slacker Canadian mechanic for a few years. Then he broke through and ditched the dead weight and took it to another level.

49.Jessica Patterson (@JP_Money250) She may be a girl but she is still faster than you.

50.David Pingree (@davidpingree) Funny guy. Can be quite cynical at times but face it that is why we love him. Loves Obama and homeskooled kids.

51.DMSX Radio (@dmxsradio) The other moto radio show. These guys have been at it a lot longer so that means that are way better than @pulpmx. Just ask Kenny he is a big supporter of theirs.

52. Stefan Everts (@StefanEverts) This one surprised me the most. Maybe they don’t have the internet over there in Belgium. That or they are just too busy eating waffles to care. Either way I thought that someone of Evert’s fame would have had a much larger following.

53. Kenny Watson (@vegaskdub) Loves RC. Is in a close race with Pookie for twitter followers. Currently has a slim lead.

54. Pookie Matthes (@pookiematthes) The better half of Steve. Needs you to follow her so she can catch @vegaskdub in the twitter rankings. Could there be a competition starting here?