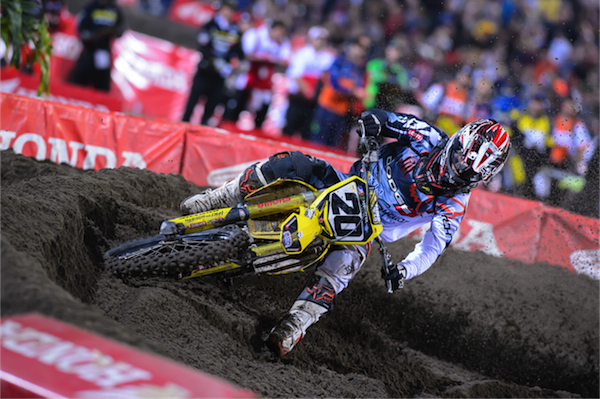 I was really hoping to have a big question answered in Daytona. That being, “Is the Dirt Wurx crew part of the problem with the tracks of late?”

Honestly though, that Daytona track was such a drastic departure from even typical Daytona in the last decade, that it really couldn’t be used as a comparative measure.

Yeah yeah yeah, Daytona is always considered the gnarliest track of the year, and it is, but this track was just absurdly different from the stadium tracks these guys have come to expect and prepared themselves and their machines for. Daytona 2013 may be the first purpose-built Supercross track designed to challenge not only the riders cajone’s but their 4 stroke machines as well. It was a “Super Motocross” track in all senses of the word. Actually, maybe “Moto Supercross” track would be more technically appropriate. After all, Supercross tracks are built on flat ground, which this is and the major departure from the status quo here was loose dirt, some of it tractable, other sections loose and deep. But all of it was completely alien to the Supercross tracks which have come under fire this year.

One thing I take away from watching this race if I’m a Dirt Wurx guy is enough with the compacting everything to the point it becomes concrete-like. There’s definitely a line where the surface is either too hard(typical) or too soft and the jump faces become dangerous. We all remember St.Louis 2010 when RV switched his line due to a rut that had reached the concrete of the stadium floor. That was nasty. Maybe that’s the yardstick they base the track prep on now and nothing else? “Make it as hard as it has to be to not reach the stadium floor, keep the racers on the track and the fans in the stands”– rinse, repeat…

You definitely don’t want to go and change everything all at once such as the standard distance on triples, takeoff pitch and softer track surface but something has got to change, they just need to start somewhere. As I wrote last week, when the track surface is so hard that riders are focusing more on error minimization than racing forward; the racing and the sport suffer.

There was a lot of talk in recent week about how may guys were in the same second in qualifying times. At first mention that sounds like awesome race-parity but it’s something else altogether and very disappointing. Lack of option. A track which lacks in obstacle options means every guy doing the same rhythms and makes racing boring even if the guys are grouped together. Single file sucks. Plain and simple. Make some inside outside benefits for the guys. If there is a rhythm coming out of a corner that you need a run at to do, make an alternating hit on the inside that makes the inside line a viable choice in race conditions. Add a wall, abbreviated whoop section, dragon back, angled hit, uneven spaced rhythm– something to break form the monotony of what has become the week to week.

Dirt Wurx absolutely has to shoulder some blame in the lack of passing on track. Yes, the top guys are very close together but you’d be crazy to think that all of them wouldn’t be pressuring the guy in front of them more if they could find an effective alternate line that they could actually hook up on.

There are times in sport when the organizers identify the need for change and they either drop the ball or run it into the end zone. The necessary changes have been identified: less compacted track surface, inside/outside options, introduce non-standard obstacles. When the guys can go week to week and nail down the race line before the end of the sighting session, the track is lacking. Options people. As they say “variety is the spice of life”.

You’d think that being called the “Last Chance Qualifier” there would be epic battles regularly in said race that would make them “must see”. Lately though, the LCQ’s have had decent racing but the highlight has been the checkered flag air-wheelies. For the second week in a row however, bubble-racers Bobby Kiniry and Weston Peick have gone head to head for some physical and intriguing racing. It’s pretty common knowledge that Weston is a tad faster than Meathead on a given night, so when Weston began closing on Kiniry with 3 long laps to go, you just knew some fireworks were in store. And they delivered. It was mano-a-mano, nay; Meathead vs Nihilist. These guys are buds, or at least as much buds as a Nihilist can be with anyone, and while they traded paint, they kept it clean all the way to the finish line on the lap that counts most. At the finish-line, the transponders showed that Meathead had more racing ahead of him. I checked my live-timing app at the moment they crossed the line and it showed Meathead by .004 but no; contrary to all common sense notions, the transponder is not the determining factor when it comes to close racing. NOPE! Of course you would toss the electronic scoring system out the window and rely on the judgement of the eyeballs when it REALLY matters. More tomfoolery from the AMA. They determine that not only was Peick the actual victor, I load up the live timing moments later to now see it show Peick ahead by a margin of .005. I swear, do they try to paint themselves into these precarious situations? It’s uncanny how they manage to find a way to make a call which comes under scrutiny nearly every week. Well, either uncanny or simply a major flaw in the procedural manual they follow. I’m sure it sounds like I’m picking on them at this point but seriously, I’m just a real stickler for logic and things making simple sense. Apparently the AMA is contrarian to my line of thinking.

You just felt it, coming in to Daytona, RV was hitting his stride and for him to not win Daytona would be more about the crazy stuff that happens on track or his own errors than him actually getting beat. He did have his own errors, including another off track excursion but it didn’t matter, his opponents made more errors. The ball, and the points lead, is back in RV’s court with 7 rounds left to go. That opening round 16th seems like merely a bad dream at this point. It made the ascent to the top of the points harder but no less expected at some point of the series.

Sadly, I was wrong last week when I wagered that Millsaps’ 6th in St.Louis would be his worst finish. That incident with Trey and a midweek crash left Davi hurting in Daytona and that is one baaaaad place to be hurting in this sport. He lost the points lead and now is where the pressure really starts. Does he dig deep and make it interesting with RV, or are his injuries going to make that decision for him? How about some cortisone or something to make that pain go away before the mains? We all need that.

Dungey was steady as 2010. Unfortunately for him, it was like a 2010 race that RV was in and faster. Still, second on this track is nothing to sneeze at. That was a great finish and yup, the Dunge is solidly on the points podium.

Chad Reed rode far better than that cinco on the scoresheet suggests. He was aggressive and made passes, some of them twice, after hitting the dirt a few times. There’s no doubt he’s not stoked on the result but I guarantee you he’s happier finishing 5th now than he was a few weeks back when he was finishing around there without crashing. It’s progress and more importantly, the feeling is back. He just needs to rectify his starts and cut out the diggers.

James goes Crazy Balls at Daytona and if anyone were going to take this race other than RV, It would have been JS. That’s what I thought prior to the race anyway. JS7 went down early and clearly had the look of a guy who knew on a track as gnarly as this, he wasn’t going to make up the ground necessary and just rode her steady to the finish.

Maybe Marvin Musquin really is a Martian? I’ve watched his main event holeshot about 5 times and the only way you time that gate so perfectly is if you have a flux capacitor, or your an alien with future-seeing powers. Mike Alessi wants to know how Marvin did that! Movie-night at the Alessi compound is going to be all-Marvin, all-night this week. Ok, I’m done.

It was great to see Marvin win that race and even cooler to see how genuinely excited he was to do it. It’s always awesome to see a first time race winner and their honest and unabashed emotion come out when it happens. It’s even better when the rider has seen failure before capturing it; ala Wil Hahn or Marvin.

I found it pretty interesting that the gnarliest track of the year was dominated by a flowingly-smooth styled Frenchman. I guess it makes sense though, using his smooth style to minimize the treacherous track conditions.

Wil Hahn. What could I say about Wil that I haven’t said in the last two weeks? At this point, he’s blowing me away. The feel good story is turning into the next chapter where winning is the norm. No, he didn’t win the race but the way he reeled in Wilson and made the pass was as impressive as his last two wins.

How crazy is it that Jeremy Martin didn’t qualify in the opening round in Dallas, yet he’s this good? Pretty crazy.

Obviously, the question following the Daytona 250 race is, “what is wrong with Dean Wilson”? Is it really that midweek crash that left him concussed and battered which is lingering? Perhaps he’s been spending his weeks trying to recover from the crash and not riding, leaving him with only the races on the bike? I’m not buying the possibility that he bought into his own hype this year. That was admittedly his error at the onset of last years regional series and for that to be his downfall for two years running would be a massive flaw that I don’t see Mitch Payton glossing over in pre-season prep. One thing is clear, Mitch’s nightmare that started on the west coast, has followed him to the east.

We’re heading to round 11 and both classes have plenty of question marks still, lets hope the tracks to come aid in delaying the answers until Las Vegas.

Inside the BTO VIP Fan Experience