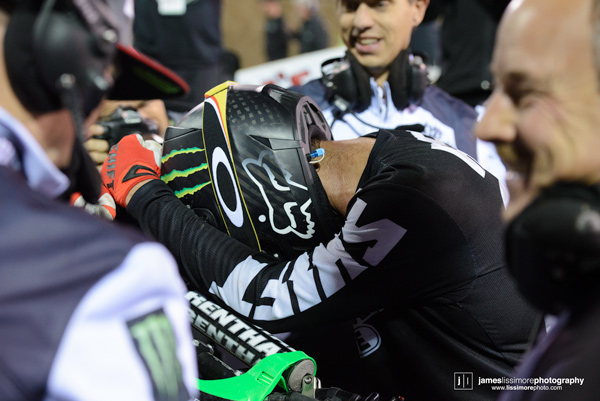 Unless you have earplugs in and blinders on, you know I’m screaming “I told you so”, just like so many years before.

Unless you have earplugs in and blinders on, you know I’m screaming “I told you so”, just like so many years before.

Please allow me to gloat a bit and quote myself from two weeks ago in this very column, “2013 was the anomaly, people. It’s 2012 again and I’m telling you, Reed will make many of you look silly. Again.”.

I feel like I’ve written this exact Swisscorner before, oh that’s right, I have. Specifically, every other time Chad ascends the podium to a victory after an off-season filled with fans disparaging and undermining his abilities and desire.

In case you are lacking in the ability to extrapolate intention, desire and in layman’s terms the “I’ll show you” factor, Chad Reed is the Master in this arena. Starting in Australia, he wanted to come here and at least have the chance to prove that he could ascend to greatness. Those who held the power in America at that early point in his promising career, felt that gambling on a relatively unknown Aussie was too great a wager and passed on him.

This poured the mental foundation which would contain the “I’ll show you” fuel of the future. This container has never dipped toward “E” since it’s inception. This is due partly to the powers that be which provide the race-equipment and secondarily, the fans of the sport who can’t help themselves but get caught up in the shine and hype of the next best thing.

Even as a young rider in Australia, Chad’s father placed a lot of expectation on his shoulders and created a sense of “uphill battle” in Chad’s mind, even when he was doing very well in his native land. At this formative time in Chad’s youth, this became the familiar mindset which would forever become his motivational mindset for a career which has now stretched further than anyone could have anticipated. But when your motivation is bred from proving those around you wrong, it’s that same motivation that makes stepping away even harder to do.

It’s often been cited in Chad’s early years in the US, he was hard to work with and as stubborn as they come. It’s understandable. When you are motivated by the negativity that others project on you, it’s easy to become stubborn and place all your trust within your tightest inner-circle. As the years passed and Chad saw more and more success stemming from the approach he had come to rely on and nurture, it served him well to continue to draw from that well-of-doubt which fans of the sport, not fans of Reed, projected outwardly in their discussions and on the internet.

Flash-forward to 2011 and those seeds of doubt had sprawled into the team structure so far that Chad felt it a better move to fund his own team and surround him with an even larger inner-circle of trust. He was a father, self-employed, older, more comfortable with who he had ever been, yet on the receiving end of more doubt from the industry and fans than he had ever seen. He was not only being doubted by many, he wasn’t even a consideration as a contender at this point, by many. Remember Oakland 2011? The discussion was how happy everyone was for Reed finishing 3rd because they thought 2011 would be his pride-swallowing swan-song where he’d fade away into marginalism, nary sniffing a podium in his final year. He went on to podium 10 more times in 2011 and win 2 races. The “I’ll Show You” container brimming near capacity.

Coming off of 2011 SX, you’d expect Chad to be on the receiving end of the most fan and industry support he had in years but the infamous “Chadapult” at Millville, again left his 2012 capacity in doubt. Alas, the 2012 effort of TwoTwo started where it left off in 2011 SX; 5-podiums and 1-win before he went down hard while pressuring RV for the top spot in Dallas. Chad Reed looking better than he ever had, down and out for the remainder of the 2012 calendar. This brought us back to prior to 2011 wondering if Chad would or even could come back to the elite level he displayed in Dallas.

Chad became the big question mark coming into 2013. He was gone from sight for such a long stretch, he really was the X-factor as 2013 approached. Through the first 3-rounds, Chad went 4-4-3 and his podium at Anaheim 2 had fans talking again. In a strange twist though, the fans were encouraged by Chad’s first three finishes, while Chad himself was feeling they were hollow. He knew he wasn’t feeling right on the bike and that those finishes were pointing toward his optimistic peak of 2013. He was not in a good place.

As 2013 wound down and his finishes also dwindled, Chad had some serious choices to make. The Cinderella story of the 2011 TwoTwo upstart was at a tipping point. Would it become the courageous, though ultimate failure many had predicted and see Chad step away from racing? Would TwoTwo fold up and see Chad step back under another team canopy? Or would Chad dive deeper within his own soul than he ever had, turn down great machinery, support and money to bet on himself like only a crazy-man with a gambling problem would?

It’s a self-fulfilling prophecy. The man who has forever been fueled by those who doubt him, makes the one-step which forces those doubters to only amplify their doubts. He not only turned down money, factory machinery and infrastructure headaches; he switched brands which introduces a whole new set of possible (likely) headaches as he not only needs to learn to jive with new personnel; but also to jive with the machine that HE himself will be battling the best on every week.

3-rounds into the 2014 SX series and Chad sits 3-points out of 1st and that includes a freakish (even by 2001 Chad Reed standards) 9th at the second round. Let me say that again just to make sure you’re getting it. It’s 2014, the class has more parity than it EVER has (just look at the finishes of the top 10 through 3-rounds), Chad is nearly 32 years old, has two kids, a new motorcycle, the TwoTwo Motorsports infrastructure sitting on he and his Wife’s shoulders… oh yeah and that container of “I’ll Show You” boiling over with fuel.

Keep doubting people, it only fuels the fire.