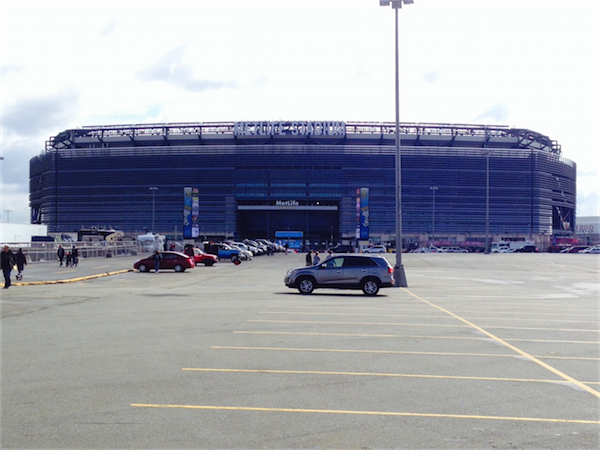 Our guy Blaze dishes on his day at the East Rutherford Supercross.

Our guy Blaze dishes on his day at the East Rutherford Supercross.

Once open a time, there was a Supercross in New Jersey.  It was in the glory days of one-handers, no-footers and trophy girl make out sessions. Riders like Rick Johnson, Jean-Michel Bayle and Jeff Stanton captured Supercross glory in front of adoring fans that went home drinking a cold Coors Light, with a pack of Camel’s packed in their Wrangler jeans. It was the eighties and life was good.

Then in 1991, abruptly the music stopped. After a five-year run, the party was over and The Camel Supercross Series turned its eye away from the Northeast to work on booking more Anaheim races for the SoCal bro-down crowd.  By the time they got to Anaheim VI – The Revenge of the Flatbill in 2000, the Meadowlands Supercross was little more than a distant memory.

For the New Jersey faithful, it would long wait for Supercross to return to the Garden State. Even as the sport exploded in popularity, the series continued to ignore the single largest media market in the entire country.  Then finally, in late 2012 rumors of a purposed return to the Northeast began to circulate. Could it be true? Could the land of Kessler and Carsten finally be getting its groove back? Well, as we all know now, the answer was yes. In April of 2013, Feld Motorsports officially announced that Supercross would indeed be returning to New Jersey in 2014.  The race was scheduled to be the penultimate round of the series and take place at Metlife Stadium in East Rutherford, NJ.

Seeing how this looked to be a happening of epic proportions, I immediately started making my plans to attend the biggest thing to happen in Jersey since Snookie got her own spin-off.  Even though the series was all but decided and my boy Reed was on the sidelines, I knew the New Jersey event would be something I would not want to miss. Calls made, passes attained, and Pulp gear adorned, Saturday morning I set off for the scenic hamlet of East Rutherford for a day of broing down in the shadow of the mighty Hudson River.

Here is the tale in pictures of my wanderings in and about the2014 Metlife New Jersey Supercross.