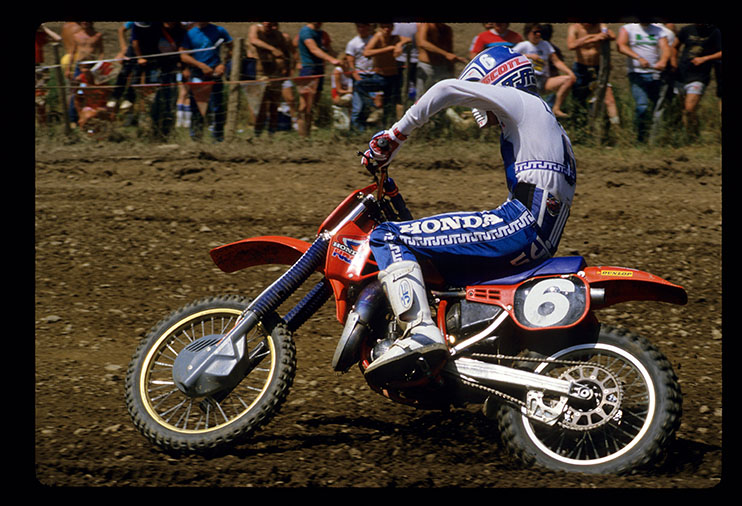 Ron Lechien: “I rode 250 nationals in 1984 and when Honda told me I was going back down to 125’s in ’85, I was fine with it. Honda sent me to Japan to that All Japan Grand Prix at the end of the year in ‘84, and I rode the 125 that O’Mara had rode that year. I guess they kind of were just feeling out to see how I’d do. I battled hard with (Jeff) Ward, and the bike was super fun to ride and everything. I was all good with the decision. The bikes were really cool. I felt good out there on that bike and I was all for it. Especially because I was looking at the competition and I’m thinking, “shit, Wardy, Bailey, and Glover, and Johnson were all in other classes” – not one of those guys was in my class. I figured it was pretty easy-going.

I lost two races all year. One was Gainesville (explanation below) and the other race I lost was High Point that year. I think I won one moto and the second moto I got a flat tire. I think I still got 2nd overall and I remember that AJ Whiting was all over my ass on the last lap and I held him off. And it was still a long way from the finish line. I think I brake-checked him and he freaking fell over and I got going and I still ended up 2nd overall with a flat tire. I was pretty good on a flat tire! I won a Supercross in Japan one time in that old Fukuoka stadium and I had a flat tire on about lap 13 or 14 and I still was jumping the triple and doing the shit and I still won the main event with a flat tire.

The Suzuki guys were the only really kind of competition for me. Erik Kehoe and George Holland went in there a few times too. And Keith Bowen rode a few motos like the one maybe in Vegas, where he kept me honest. But week in, week out there really wasn’t anybody that I felt was a major threat. There was a couple times when guys would ride pretty well. But I’d get a good start, I’d ride hard for like 5 laps and get a gap and just ride their pace and just cruise it in.

That bike was so fun to ride. The thing was just killer. It had an awesome motor obviously and the suspension was just insane. It was so fun to ride because you could just pin the thing and hit shit and not even worry about it. I weighed maybe 160 or something. I might have been a little heavier than that; I can’t remember exactly what it was. I’m thinking I had some horsepower to manage for sure. In those days and those bikes just even one or two horsepower was huge. It was a really cool bike. Looking back, I didn’t know that was going to be the last time I ever rode it at Des Nations that year but it was a super fun bike to ride.

We went to a track called Six Flags in ’85. It was right next to the amusement park of the same name. That was kind of a cool track too. It was kind of tricky. It was in these hills and it had these jumps like you’d come out of this… I remember it kind of went down this big hill and it had this kind of Supercrossy table-top thing and then you’d go over the edge of this hill and it would turn and come back and there was just like this launcher. It was like a huge, natural step-over kind of table-top jump. I remember it was super hot. It was kind of a funky track. I remember it had some cool jumps and stuff. I remember I could barely get over this one jump with everything I could give and I was the only 125 doing it, but the 250’s and 500’s, they could get over this thing.

In ’85 Mark Barnett dropped down to the 125 class on a factory Kawasaki but honestly, I don’t remember battling with him much at all that year. I don’t even remember him being a threat really to me at that time. Obviously he wasn’t, so I wasn’t really thinking about it. The only thing I can think of that year that really bummed me out is that he won the Atlanta Supercross and I had that one in the bag. I just slid out in this stupid turn, just pushing too hard. I think I won the first moto. I was winning the second moto and I fell and gave it to him. That was the last Supercross I think he ever won and he won it with a 2-2 score.

I got fired by Honda for getting busted in Japan for bringing in pot but people think I was going to ride for Honda in 1986 and that arrest did me in. Not true, I’d already signed my Kawasaki contract, so I wasn’t too worried about it. It did cost me some money because Honda owed me still some championship bonus money, so it cost me like $25,000. I breached the contract by bringing the marijuana with me or having it on me or doing whatever part of the clause the drug part was, and they fired me right there when I got to the hotel. But at the time I wasn’t too worried about it, but looking back it threw the red flag up and then from then on out it made my life a lot harder to try to continue to live the way I was living and racing and not have everybody breathing down my neck, which they did.

Looking back on it, the Kawi deal was too good to turn down. But looking back I’d have much rather rode Honda’s in 1986. My dad was the one that was running my corporation and doing most of the decision-making and the money was just too good. Number one, it took two or three years on those Kawis just to get comfortable on them and then just about the time when the bikes are getting pretty good and that next year’s bike was coming out- I broke my femur. So it kind of sucked the way it all worked out.

Me and my dad and a little deal in 1985 that if I won the championship I could get any car that I wanted and I always wanted a slope-nosed Porsche with the white BBS wheels and the whole deal. I found a guy who was friends with (Johnny) O’Mara that imported cars and they had my car built in Germany. So it was going to be a factory-done, slope-nose, because all the slope-noses back then were aftermarket ones where they’d send it over here and they’d get one. Well, this one was done at the factory. It had trick gauges- It had white gauges with black numbers. They were called Gemballa gauges. It had the gauges, it had the BBS wheels, it had the convertible, and it had a turbo tail on it. It looked like a turbo but it was only a 911. They did all that shit and I ordered the car and they built it. They took a Polaroid before they put it on the boat. I got the picture of it before it went on the boat and then it took like six weeks to get here. And like two weeks before it got here I got my first DUI and my dad wouldn’t let me get the car. All I had was this Polaroid of my dream car and I never got it.

1985 was the year I was going to get my car and everything was going to happen and then I got arrested and then it all just went south. Looking back I’m probably lucky. I got my first DUI right then sometime and I had that car coming. My dad didn’t let me get that Porsche and probably a good thing because I was still pretty wild driving around and I could have did a James Dean and killed myself.”