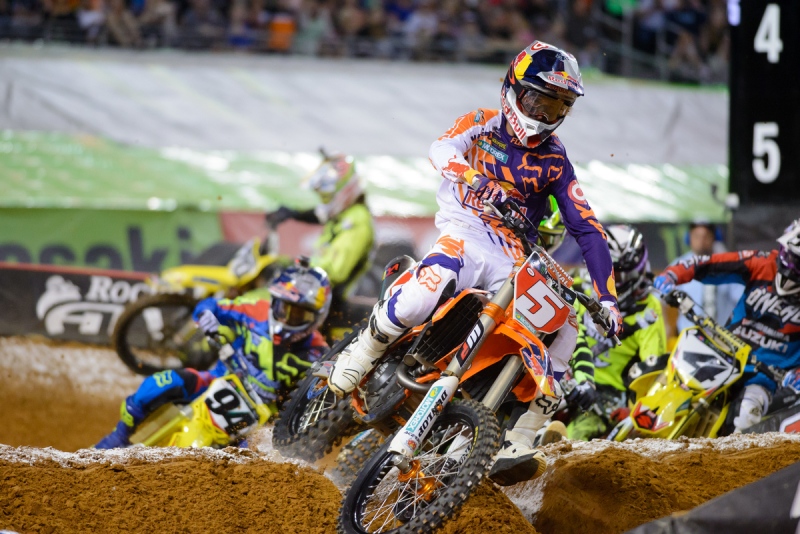 1- Dungey got the start and it was over from there, we think if Roczen had gotten the start he would’ve won–there wasn’t much to separate the riders out there was there.

I don’t agree on the fact that Roczen would’ve won with a better start. Dungey was the fastest in the main. Roczen got into 2nd on lap 6 and wasn’t too far back. The gap was under 2 seconds with a lot of laps left. We have to give credit to Dungey for a solid ride. He was the best in Dallas. The track wasn’t very selective but there were ways to make up time in the main when it got slicker and rutted in the insides. Ken made too many mistakes and didn’t have enough smooth lines to catch Ryan. It was definitely a good track for a smooth and mistake free guy like Dungey and he capitalized on it very well. On the other hand, Ken wasn’t at his best. Where did the Roczen from the first 2 Anaheim’s go?

Yes he didn’t get the same start in Dallas than he did in round 1 and 3 but his riding wasn’t as good in my opinion. If he was riding like in the Anaheim rounds, this race would’ve been different. I thought his throttle control and his momentum were on point early in the season but not really in Dallas. He was searching himself on the track, trying different things on the track but didn’t focus on being easy on the throttle while keeping his momentum. That’s what you have to do on a track like Dallas, let your brakes go earlier in the turns, keep momentum. You have to roll the turns, not make sharp turns and also get on the gas smoothly.

2– Musquin was on another level all day long and Tonus was pretty fast as well. Obviously it’s early but how many races do you think Musquin will win in this series and who will give him the most trouble?

First, Marvin is a great rider that should’ve had a couple 250 championships by now if he hadn’t gotten injured so many times. He’s a veteran in the class that was World Champion in 2009 and 2010. So he has to dominate this series against a Bogle that won a title because 3 riders that were better than him got hurt last year. He has to be better than a Martin in SX that has been struggling in SX in the last couple seasons. Tonus? He’s also a good rider but this was his first SX in the US ever. We can’t expect him to beat Marvin right away, maybe give him time. Then who else? Savatgy? Lemoine? Let’s be honest, even if you give me 100 to 1 picking the field against Marvin, I wouldn’t take that bet. Watching the race, it seems like Marvin was doing a recovery ride or riding with the pace you have when you trail ride with your buddies on a sunny Sunday morning.

I thought Martin was going to be better but he made mistakes everywhere. He was all over the place and not being smooth at all. I didn’t think his bike helped either. I don’t think his set-up was great. The bike looked tall in the back, a little sketchy chassis-wise and not very smooth power-wise. But, again, I wasn’t there and only watched on TV. A National Champion shouldn’t dice with Lemoine, even if he’s a good SX rider and an ex-future MX star, for most of the main. I think the guy who will give the most trouble to Musquin is himself, really… He needs to stay healthy and stay out of trouble in the opening laps of the mains. If he does, he will win most of the races this season.

3– Seely lost the front end a couple of times, you are a staunch defender of using more air pressure than what the riders are currently doing. Can you explain this theory to us again?

Seems like I’m beating this to death but when I see guys unable to open the throttle on a flat turn in 2015 with 450 bikes that are supposed to have great traction, it bothers me. When I see photos online of riders literally riding on the rims and tires looking like they’re flat, it bothers me. And, really, I don’t give a s$%t what the so called tire “experts” are saying and I don’t give a s$%t what Reed tells me about tires on Twitter. Race tires today are built softer than in the 250 two-stroke days . Back in the day you would need to leave a set of race tires in the sun for a hour to mount it on the wheel. I know this because I never had a practice bike mechanic and I was doing it. Nowadays, you can almost mount them like a bicycle tire without tire irons. I am joking but you get the point. 450s are heavier than 250 two-stroke. They have more inertia. They have more torque. They have more power. All this additional stress from weight, torque and power compared to a 250 two-stroke goes through the suspensions and into the tires. Suspension is way stiffer on a 450 than a 250 two-stroke.

If you put Reed’s 2004 YZ250 championship suspension on his 2008 YZF450 championship bike, it would be only good enough to go enduro riding with. So more power, more weight, more torque means stiffer suspensions to compensate the extra stress on forks and shocks. But with tires, we go the opposite way. They ride with softer tires, more open patterns which make the tires softer because less knobs. If you put more knobs on a tire like a hard pack pattern, it makes the structure of the tire automatically harder. And, they use low pressure or soft mousse (you know the “foam” you put in the tire so you don’t get flat) at around 10PSI. I am no engineer, I never graduated high school and the only thing in life I used to know was riding a dirt bike but when you ride high powered, high-torque, SX “suspended” 450cc four-stroke dirt bikes on hard packed SX track with sand tires that look like you riding with a flat, you can try to explain to me until I am 87 years old and I will not understand how it can work. But again, I am a high school drop out, I never won a championship, everyone only knows me because of a goon riding video and everyone thinks I am a clown.

4- Tomac got Reed pretty good as they carried their San Diego “feud” over into Dallas–what you think about the pass and this drama?

I think I missed something about the “feud” somewhere. The only thing I saw was the block pass attempt by Tomac on Reed in San Diego that didn’t work out so well for Eli and I saw the aggressive move Tomac put on Chad in Dallas. Then, everyone talks about retaliation and feud. I don’t follow enough people on Twitter to get in all the SX drama between riders, wives and girlfriends… The two incidents I saw weren’t that bad actually. In SD, Eli was too late to make it stick and crashed. Then, I don’t know what happened. In Dallas, Tomac took Reed high and Chad’s front wheel went between the top of the bowl turn and the tuff blocks resulting in a crash. That’s a text book pass like we’ve seen a million times in the history of Supercross. But again, that’s all I know about. I don’t think Reed nor Tomac should really get into it about this stuff. They have bigger fish to fry. Chad needs to find some speed somewhere to become a contender again and Eli needs to figure out how not to start like his team manager Larocco…

5– Vicki Golden got a lot of hype and she’s racing the whole series although she failed to make the night show, we think they should back down the hype and let her prove herself out there first–THEN get everyone excited…your thoughts?

First of all, we got to respect her for trying. Steffi Bau tried in the early 2000s so Vicki isn’t actually the first one to try. Jessica Patterson tried to qualify for a National too. Is there too much hype? Of course there is. What if she gained a couple seconds a lap and made a night show? I don’t really see her make a main. So what’s the big deal? I don’t understand the point of it. The best women soccer players don’t play with the guys. The best WNBA don’t play in the NBA. There is no future for girls in MX and SX. They don’t make money racing among themselves. They can’t perform with the guys and make a living. I respect the girls/woman riding dirt bikes. It’s a fun hobby for everyone but unfortunately, MX and SX should stay a hobby for women/girls rather than trying to make a living in it professionally.

The advice I would give to girls that love riding dirt bike is to get an education, be successful in a 9-5 job, buy a dirt bike and go ride with friends and family on the weekends. Vicki is 22 years old. She’s the best women SX rider at the moment but what’s her future in SX-MX when you see riders making mains in the 450 class that will have to go to work after they MX/SX career? What I am saying not only works for women but also for the privateers struggling to make mains and to get to the races financially. What’s the point of “playing” a dangerous and expensive sport that you’re not good enough to get something out of it? Life after MX/SX is long and sometimes you have to think long term and see what you want to be at 40 or 50 years old.