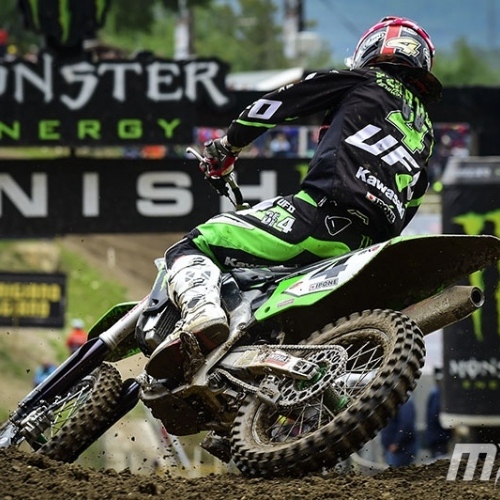 The MX1 championship is tightening up!

The MX1 championship is tightening up!

Give him an inch and he will take a mile! Antonio Cairoli won his second GP of the season, second in a row and did it in front of an adoring home crowd to get within 25 points of championship leader Tim Gajser!

At a picturesque circuit in Trentino, with a peaceful mountainous background perfectly capturing the beauty of Italy all gloriously contrasted by the intensity, noise and patriotism of an Italian motocross grand prix nestled at the bottom of a stunning landscape, Cairoli sent the trackside fans wild with a win that made sure his rivals knew he was now a serious contender for this title.

Cairoli holeshot race one and controlled the race ahead of a frisky Max Nagl, then in race two after being content with a second place to a fleeing Tim Gajser, Cairoli inherited the lead after Gajser crashed, only to lose out to Febvre in the dying laps. But Cairoli knew a second would get him the overall victory and take another ten points out of the championship leader. Cairoli has went from 47 points behind the championship leader to 25 in just two rounds!

After the race Cairoli still admitted he wasn’t on top form but was getting closer, as his last lap charge to get Febvre highlighted. Cairoli said: “I’m finding my speed again and my physical condition is improving. My arm is improving with the latest therapy that I am doing and I am feeling stronger. It’s difficult to win a home GP. This track is not one of my favorites and it’s where I have struggled a bit in the past. But this weekend was good for the championship and I made a lot of points. In the last two weekends we have almost closed the gap.” Speaking about his two young rivals he admitted: “For sure they are in better shape. They are motivated and riding aggressively but the championship is long and I am getting closer every weekend.”

The momentum is certainly moving in his direction and Tim Gajser will be frustrated with a crash in each moto that realistically prevented a potential 1-1 score. Now he is only four points ahead of Romain Febvre who crashed twice in race one but got the job done in race two after running down Cairoli to take the win.

But both know now that Cairoli is the shark in the water, and he is getting stronger however speed is not the issue as Febvre confidently stated after the race, it’s his starts: “I knew that I had the speed, but I made a mistake and had to come back in the first moto from last to sixth. In the second moto I tried to put everything together and went from seventh to first.

“We worked on the start with the mechanics and it showed in the second moto, and now I just need a little bit of luck in the next GP and things will hopefully get better and better.”

Febvre’s corner speed is at times, ridiculous. He was practically running into the back wheel of his rivals round the rutted turns and drafting them on the exit like it was MotoGP!

It was good to see Kevin Strijbos back at the sharp end and the Suzuki man just missed the podium by one point. It was the type of performance Strijbos and Everts have probably been expecting from Qatar but their work is paying dividends now and hopefully Strijbos can show this speed for the rest of the season.

It was the race of the year in MX2 as Dylan Ferrandis gave “more than 100%” to beat Jefffrey Herlings in a bar-banging all-out war in moto one. Herlings, who like Ricky Carmichael, forces riders to have the race of their life to beat him, did everything he could to beat the Frenchman even running into the side of Ferrandis in the last turn but it was to know avail as Ferrandis was just not for giving in. Herlings actually made a forceful pass earlier in the race but Ferrandis just hit Herlings out of the way to re-take the lead and Herlings simply could not find a way by again to get the lead despite numerous attempts!

In race two Herlings got the start and things returned to business as usual as he won by 30 seconds, with Ferrandis coming from seventh to third to secure second overall.

Ferrandis said: “As I have said since my comeback I’m taking it step by step, so for sure I’m happy with this second podium in a row. The track wasn’t easy on Saturday with the rain, and today also it was rough so I’m happy to get a podium on a track that I don’t really like. In the qualifying race and again today in the first race it was great to get a holeshot; it helped me to chose my lines and keep the pace. I had a great battle with Jeffrey in the first moto; I think that’s good for everyone to see close racing. The second race wasn’t as good. I did a wheelie out of the gate and lost everything there; I was outside the top ten but I recovered to third. It was tough to pass and I used a lot of energy to come back to third behind Jonass. I’m happy that my shoulder is not painful and I feel improvements every weekend; we are doing a good job with the team and it will be good to have one weekend without any race as it will help us to work and test.”

Meanwhile, over at KTM, Herlings was philosophical at losing his moto win-streak: “It was a difficult weekend and even half way through the week we weren’t even sure we could be here. My ankle was very big and swollen and on Thursday I couldn’t really walk properly. We came here with the hope of picking up some points and we came out on top and that was pretty surprising. Obviously I lost the first race and won the second moto and took the overall, so in some way I’m relieved because the pressure of being undefeated is gone. But I’m still kind of sad that I can’t break the record any more. Now I’m looking forward to Spain in two weeks. It’s also a track that I don’t fancy the most but I hope to make the best of it there as well.”

Pauls Jonass showed some good form in Italy too and held off Ferandis in moto two to secure third overall. Jonass has good speed but a few mistakes in the last few races have prevented him showing what he can really do. Italy was more like the Jonass that was winning races at the end of last season.

Samuele Bernadini had the crowd on their feet in both motos as he just missed out on a popular podium but still took a well deserved fourth overall. Bernadini has been a sensation this year and in Italy, was strong for the full 30 minutes in both races, no doubt spurred on by the cheering home fans!

The show heads to Spain in two weeks and another hard-pack circuit, but another two weeks should help Cairoli get even stronger! But can he hold off a frustrated Gajser and Febvre? And will Ferrandis be able to beat Herlings again?

On the Rise: Dakota Alix