My 14 year old son Aden has been going back and forth between two different colored 125’s, but has seemed to take a liking to the YZ125 the most lately. I decided see which simple mods could help this Yamaha YZ125 two stroke the most in order to get him some extra ponies. These modifications aren’t supposed to drain your wallet, but instead give you the most bang for your buck. Aden needed to graduate from an 85 up to a bigger machine, but needed a bike that is easy to handle yet be fast enough to pull him around. We stayed clear of the 250F’s for now and settled on a machine that was easy to ride for his 5’6 115 pound frame. The YZ125 to me was the safest choice as it isn’t as fast as a KTM 125 SX and handles a little better on rougher tracks. However, he’s at a level now where his balls are dropping and the throttle is getting twisted harder, so getting him a little extra horsepower was beneficial when we went to deeper tilled up tracks. Here are six very simple mods that we have done to the YZ125 in order to get more horsepower, but also keep reliability as well as some money in my bank account. 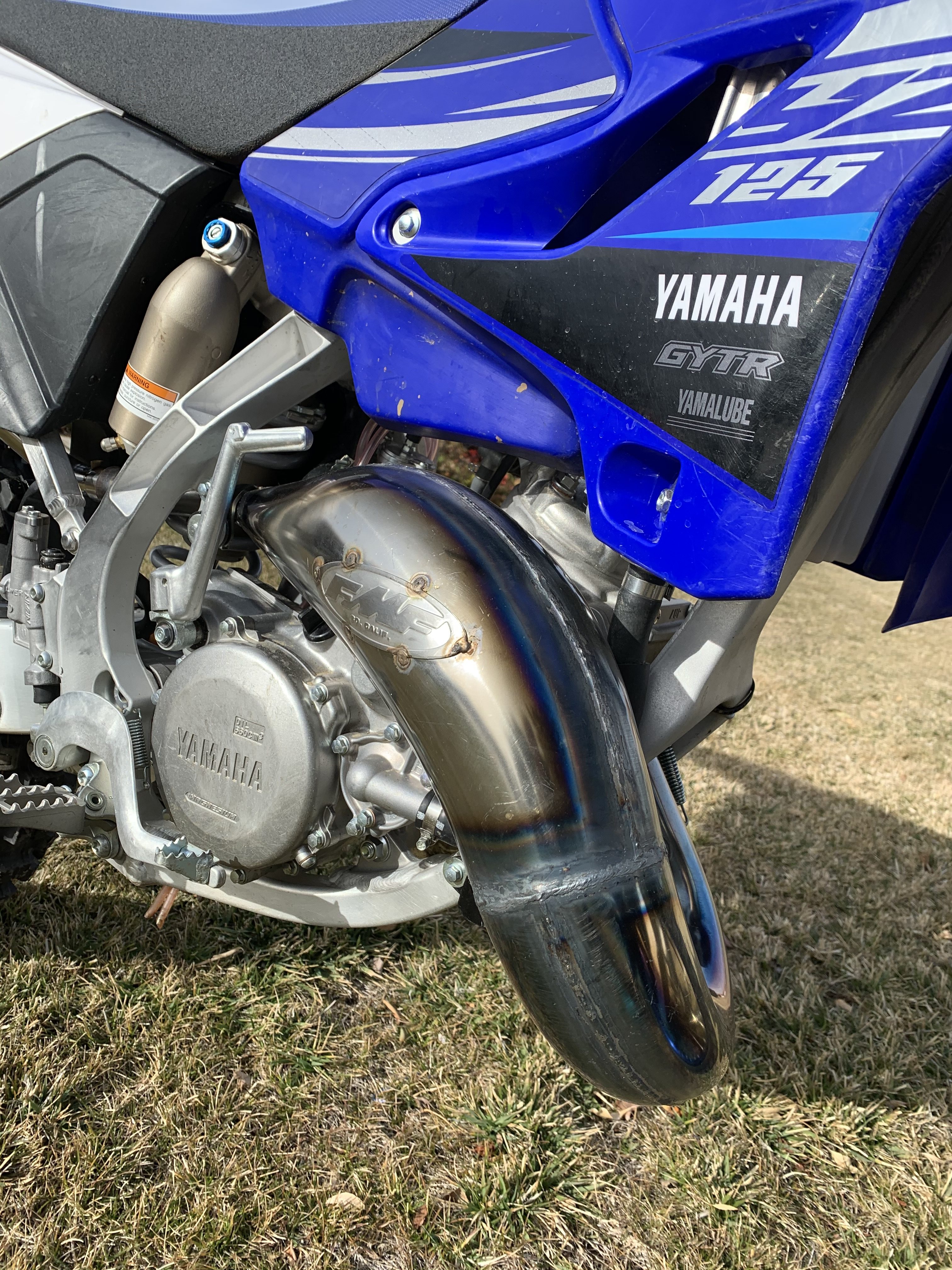 FMF Factory Fatty Pipe/Shorty Silencer or Pro Circuit Works Pipe/304 Silencer: The FMF pipe/silencer combo adds a little more pulling power out of corners over stock, while the mid range on the FMF pulls slightly longer than stock and climbs farther through the top end. The FMF set up doesn’t provide more over-rev over stock, but you will notice a healthier second and third gear pull down the straights. The YZ125 runs much cleaner with the FMF pipe/silencer (compared to stock) and looks stealthy as the silencer is hidden behind the number plate. I like that the FMF pipe comes with o-rings already installed and is ready to put on. The faster the track, the more this combination shined. MSRP: $397.00 www.fmfracing.com 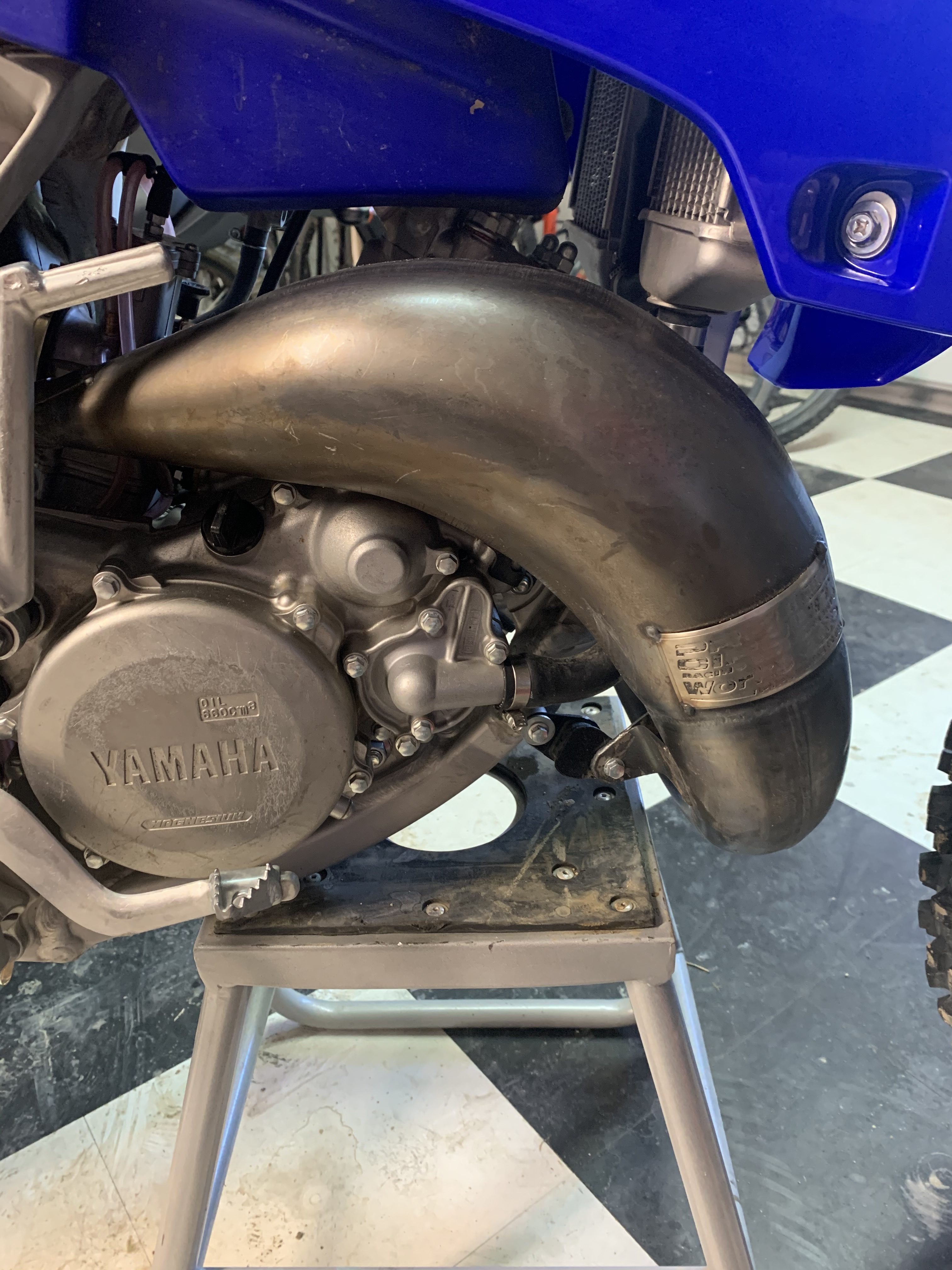 The Pro Circuit Works Pipe and R-304 silencer has a deeper sound than the FMF/stock system and gives the YZ125 more bottom end than the FMF. The PC pipe/silencer has increased pulling power out of corners (mid-range) and just feels like it’s more torquey. When rolling the throttle on you’re able just to feel more meat as you’re able to shift the YZ125 a little sooner. The top end signs off a little earlier than the FMF, but the Pro Circuit allows the rider to have more freedom with his/her riding without having to cover the clutch as much. MSRP: $396.00 www.procricuit.com 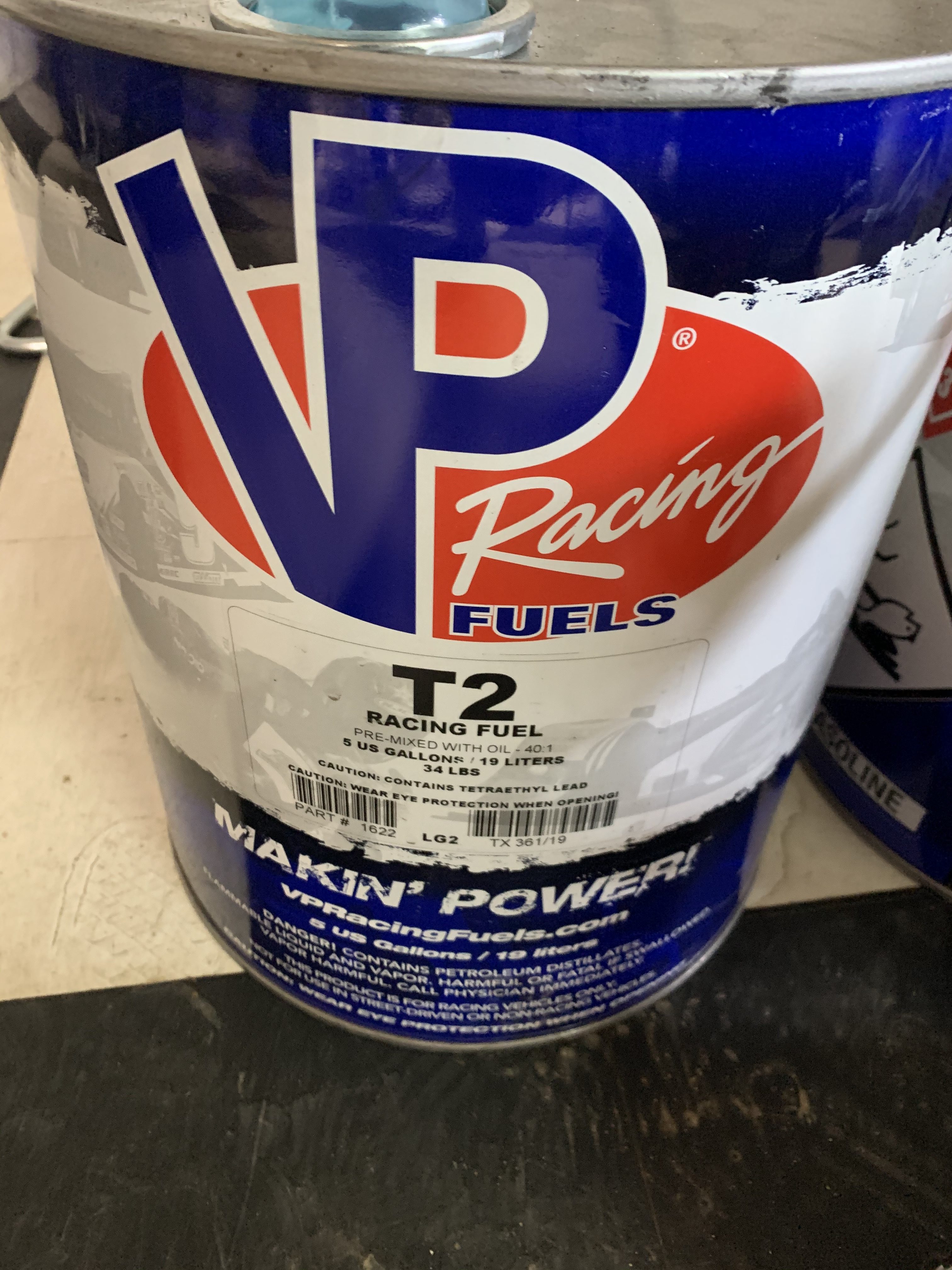 VP T2 Pre-Mixed Race Fuel: VP Racing Fuels T2 blend is the company’s latest concoction of two-stroke motorcycle race fuel. Unlike their popular C12 two-stroke fuel, T2 is oxygenated in order to create more power. Recommended for either stock or modified two strokes, the VP Racing Fuels T2 comes premixed at a 40:1 ratio and is ready to pour right out the can. T2 contains no ethanol, which can help the engine parts in your YZ125 last longer. The 101 octane rating helps prevent against detonation, especially in high compression engines and works well with the Apex head. VP T2 gave the YZ125 better throttle response and a stronger bottom to mid range pulling power. At around 75 bucks for 5 gallons it’s an easy way to leave the ratio rite at home and get some more power for your next race. We didn’t have to change the jetting once poured in and the color of the spark plug was always nice and brown. MSRP: Check your local VP dealer www.vpracingfuels.com 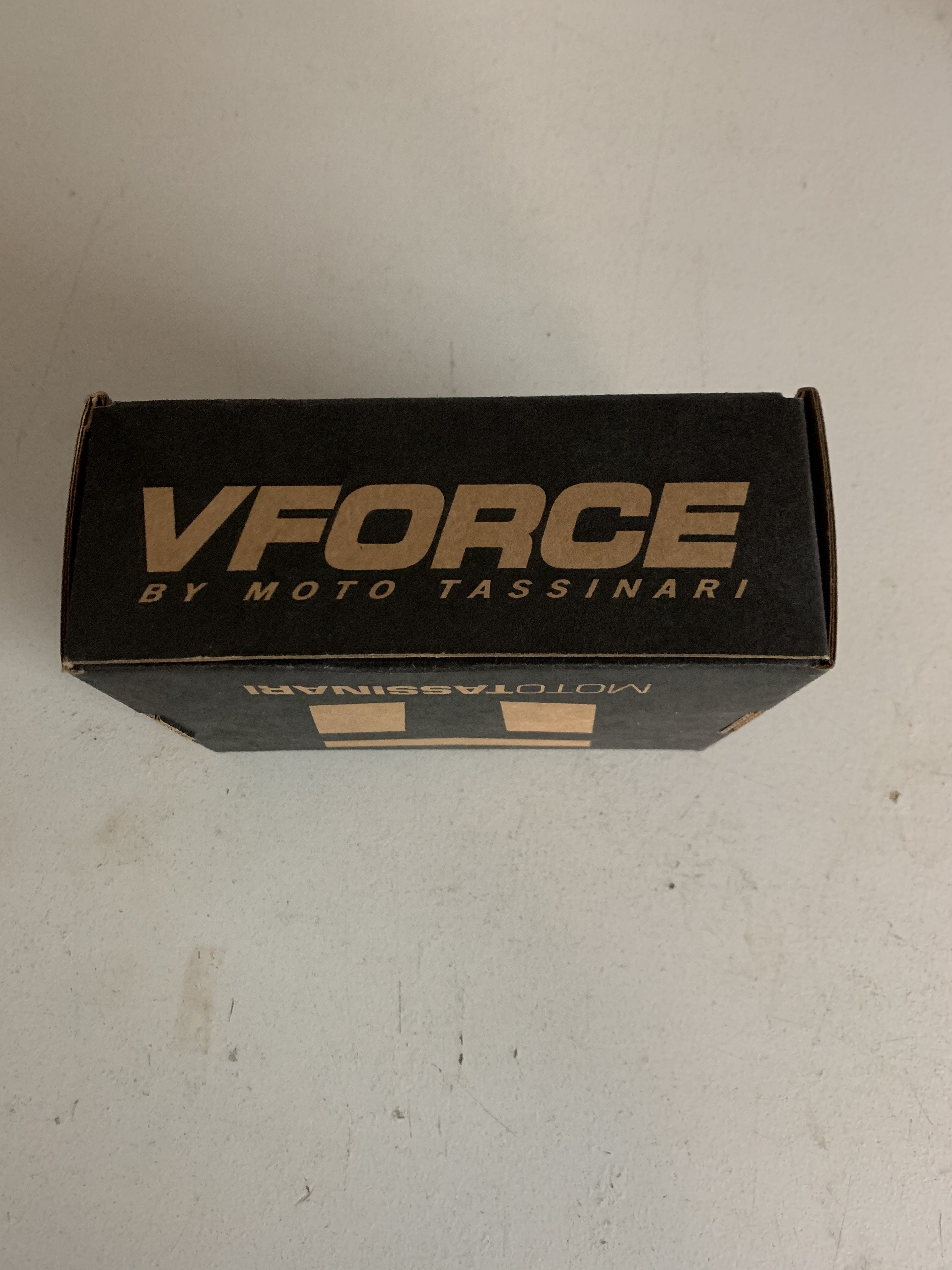 V-Force3 Reed Valve System: The Moto Tassinari reed valve system is one of the best mods you can do to wake up the Yamaha’s engine. If you do nothing else but a pipe/silencer and a V-Force you will be almost on a level playing field with the KTM 125SX. The V-Force3 system gives the Yamaha increased power, throttle response and also allows the Yamaha to rev farther than that of the stock reed cage system. The V-Force reeds also last longer than the stock reeds and resist chipping much better. MSRP: $158.00 https://store.mototassinari.com/

Gearing: Going to a 13/49 from a 13/48 proved to be a better choice for not only my four stroke riding style, but my son’s nervous novice throttle hand as well. Going to a 13/49 gearing allowed me to have a little more grunt from second gear, but also let me shift sooner into third. Third gear still felt long and usable, but just gave the YZ125 a little more throttle response/recovery through the mid range. 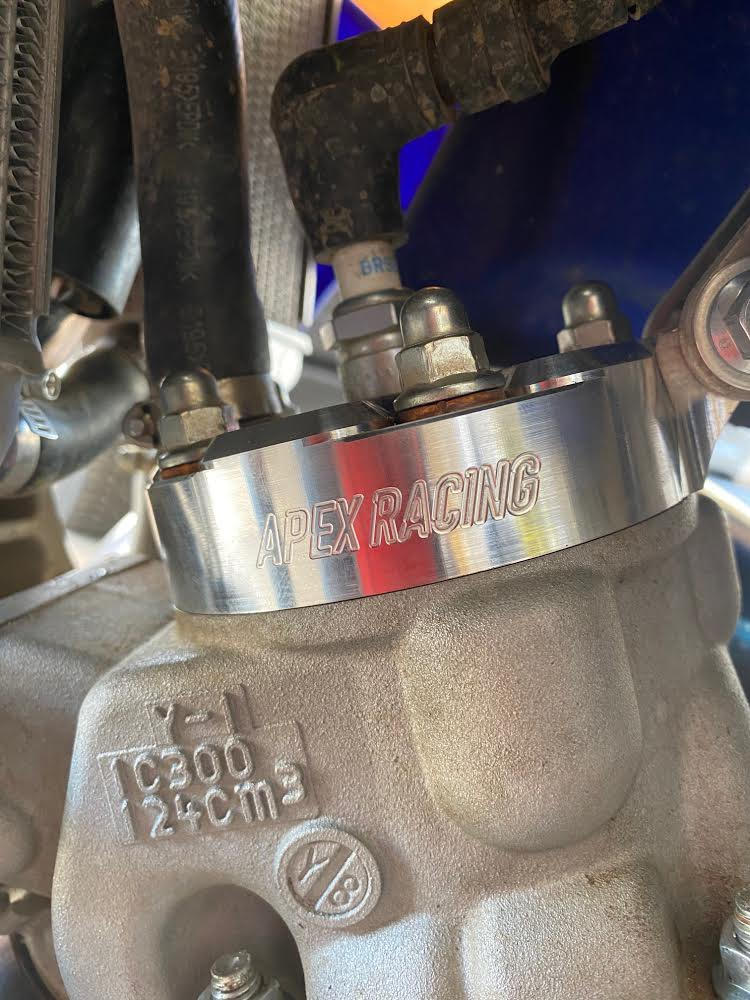 Apex Technical Innovations Cylinder Head: The objective of the Apex cylinder head is to improve upon the OEM combustion chamber shape to get more efficient combustion, while also offering interchangeability, as well as additional cooling from the billet design. A very important parameter of cylinder head design is the squish clearance. Because of manufacturing tolerances, the stock YZ125 head has a pretty large squish clearance for a 125 at around .050”. The point of the squish band is to shield and cool end gasses from the flame front to prevent detonation and to add turbulence to aid mixing and make for more efficient combustion. By having the squish clearance too big, like on the stock head, all the gas in that space is never forced to the combustion chamber and isn’t burned until too late of a crank angle to do effective work. This can cost you power, fuel efficiency, and make jetting more finicky. Also the flame front can creep into this space and actually cause detonation.

The Apex YZ125 head is designed to have a nominal squish clearance of .035” which gives a great mix of reliability, safety, and performance. Apex then tuned the compression ratios, squish areas, and msv’s of each head profile to match the type of riding they’re intended for. The msv is the speed which the fuel air mix moves across the squish area into the combustion chamber and is another very important tuning parameter. Too high and the engine will be too peaky and risk detonation and too low and the engine will need excessive advance to run right and will be slow in general. The msv, compression ratio, squish area and squish clearance all affect each other, so a lot goes into getting the right combination.

Another unique problem that the stock YZ125 has is the way it has a flat top piston with a large bevel on the side. This makes conventional head designs not pair well with it. Normally one would have to choose an angle to match either the bevel part, or the flat part which leads to a compromise in how the squished gasses are dealt with. Using modern CAD and CNC machines Apex is now able to design the squish band of the head to suit the stock OEM piston shape. This way all of the fuel gets properly burned and you avoid detonation near the cylinder wall.

Apex SX/XC insert has the highest compression, slightly higher than stock and has the highest msv that we’d advise running. This gives broad snappy power and a boost in power throughout the entire front side of the power curve. The mx insert has slightly lower compression than stock but an msv that’s higher than stock (but lower than the SX/XC) to let the bike rev out as freely as possible and give maximum over-rev.

I installed the SX/XC Apex head in order to get Aden more bottom end coming out of corners so he could carry a taller gear. My son is only 115 pounds so having him carry third gear through corners wasn’t a problem with the Apex head design. When I hopped on the YZ125, I couldn’t get over how responsive and clean the Yamaha ran with the Apex head. Apex said that we wouldn’t get more top/end over-rev with this head design, but to me this head improved the power throughout the entire RPM range. Aden is more of a lugger (four stroke rider) than a revver and this allowed him to carry second and third more. Running a good race fuel like T2 or C-12 is recommended for this modification. MSRP: $200.00  https://www.apex-technical-innovations.com