Every decade or so a motorcycle comes along that captivates the minds of the motocross masses. Machines like the 1973 Honda Elsinore, 1981 Suzuki RM125, and 1990 Kawasaki KX250 became instant icons with bold designs that broke new ground in style and performance. Sometimes, however, these iconic machines failed to live up to their hype. Being beautiful and lust-worthy on the showroom floor doesn’t always translate into winning on the track. 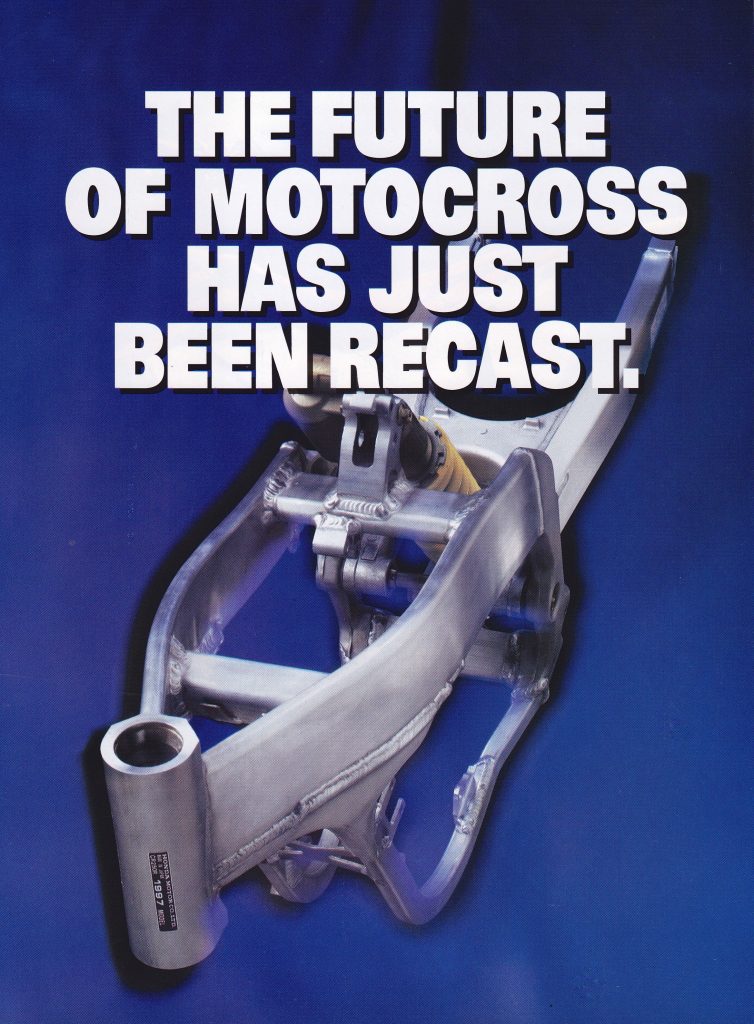 It is hard to understate the level of anticipation that surrounded the unveiling of the 1997 CR250R. With Honda’s reputation for winning throughout the previous decade, the success of the radically new machine seemed all but assured. Photo Credit: Honda

In 1996, just such a machine burst onto the scene with the unveiling of Honda’s all-new 1997 CR250R. Sporting sleek new bodywork and a road-race-inspired twin-spar alloy frame, the redesigned CR250R immediately shot to the top of motocross’s most-desired list. During the preceding decade, the Japanese had flirted with several versions of alloy frames designed for motocross. Spy photos of exotic alloy-framed works machines were a common occurrence throughout the late eighties and early nineties, but it was not until 1997 that a major manufacturer finally took the plunge.

At the time, the Honda CR250R was easily the most-successful machine in motocross. The winner of nine Supercross titles in a row, the CR was lauded for its sharp handling and blistering motor performance. Its suspension was never at the top of the charts but no other machine in moto had the aura of winning that surrounded the red rocket.

Once people started seeing pre-production photos of the 1997 CR250R in magazines anticipation for the all-new machine went through the roof. Much like the first perimeter-framed Kawasaki KX250 seven years before, the new CR seemed to be a quantum leap forward in motocross design. Exotic, sexy, and cutting edge, the 1997 Honda CR250R sweat trickness from every nook and cranny of its swoopy bodywork. 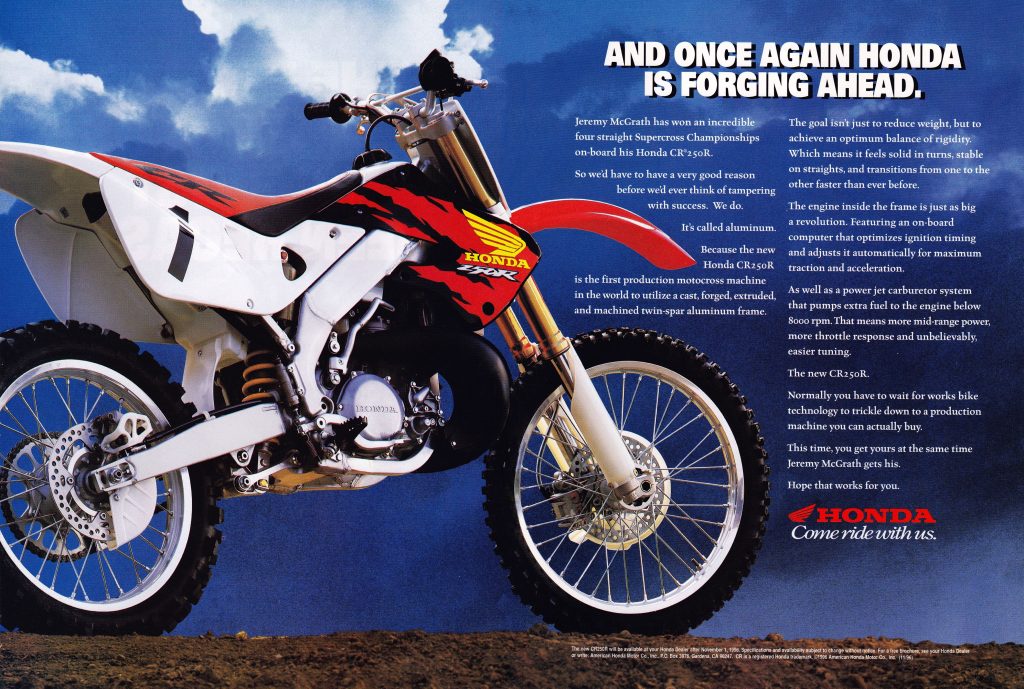 I, like so many others, was absolutely taken with the looks of Honda’s new alloy-framed CR250R. It looked like a machine straight out of the future of motocross. While its performance proved more divisive than its stellar looks, the machine’s innovative design remains one of the most significant of the last 25 years.  Photo Credit: Honda

The ads for the new CR250R proclaimed that the machine was the future of motocross with some rather mediocre puns. Poor metallurgy jokes aside, the ad certainly made a great impression by focusing on the machine’s innovative frame and avant-garde looks. I, like many others, immediately tore out the ad and plastered it to my bedroom wall. It looked so much cooler than the dowdy old 1996 CR that it just had to be great.

Of course, history would prove the 1997 CR250R to be a very controversial design. Durability concerns with the new aluminum frame led Honda’s engineers to overbuild the chassis. This gave the machine an extremely rigid feel that most riders did not appreciate. It was still wicked fast, but no longer the lithe handler it had once been. Despite this fact, the ’97 CR250R still sold like mad based mostly on its sex appeal and stellar reputation.

While the 1997 CR250R did not turn out to be the ultimate motocross weapon many had imagined it to be, it did point the way to the future of motocross. Today, all the Japanese manufacturers build their machines with frames that owe their inspiration to the ‘97 CR250R. In 1997, Honda was the only manufacturer willing to make that jump and while it turned out to be a flawed design, you have to admire the willingness of the most-successful brand in motocross to take such a bold gamble.