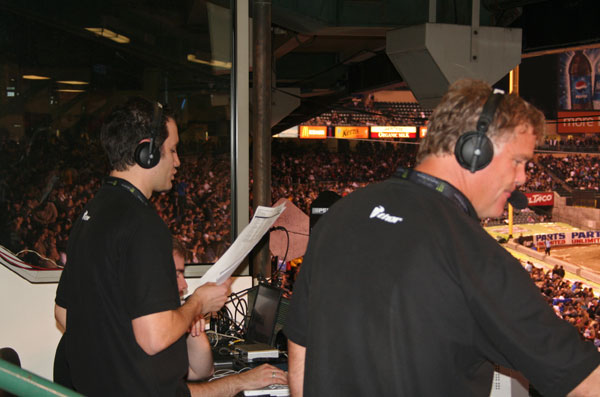 This is a month old interview that Racer X didn’t use and Weege was happy about it. Unfortunately for him there’s a place for crap like this. It’s called Pulpmx.com!

This is a month old interview that Racer X didn’t use and Weege was happy about it. Unfortunately for him there’s a place for crap like this. It’s called Pulpmx.com!

Look, I’m not going to lie here. When Keith Burgie, the on-line editor of RXI volunteered me to do an interview for Between the Motos, I didn’t really have any idea of who I could get to make this an interesting interview. Then it hit me…why not just call up Jason Weigandt and really get into the head of the best play by play announcer our sport has? Why not find out from the main man all about the webcast cancellation/rebirth? Why not get the scoop on the upcoming GNCC series from its PR man? Why not just basically call him to shoot the breeze, record it and call it an interview? Take that Keith!

Racer X: Weege, when did you first find out that the webcast show had been cancelled for 2009 and what was your reaction?

Jason Weigandt: First before we begin, I would like to say that it’s brutal you couldn’t come up with anyone else and just decided, in your lazy way, to call me up. I did not contact you for an interview, let’s get that straight. I’m not that important and have my own blog if people want to read what I have to say, I’m just doing this to maintain my friendship with you, which you make it hard to do sometimes.

Yes, that is correct but J-Law wouldn’t call me back, so you were next! Anyways, about the webcast…

I found out about a week before the first race, I know that Feld was trying to keep the thing alive for as long as they could before realizing they couldn’t. They reached a point where it just wasn’t going to happen and I was bummed.

Were you surprised about the backlash from the fans?

No I don’t think anyone was. We knew that we were going to get some reaction from people as it was pretty popular program with literally, a worldwide audience. I’d like to think that people liked the show! I think we expected it to be bad, but in this day and age, it’s hard to find the money for everything. We expected the backlash to be bad, and it was. Luckily for me and the fans, the folks from Feld were really working to try to come up with a solution, and they came up with one and along with the support of Parts Unlimited, we’re back on the air.

Now you’re back and some might say, better than ever. What was it like for you to do the live blog from Anaheim 1?

People forget that we actually did that, it’ll go down in history as the only time we did that. It was cool that they kept Jim Holley and I on staff and sending us to go to the races and do these other things like the Youtube videos that are out there.
So that means Anaheim 1 was the only time that it (live blog) happened and I was ready to really hate it because I wanted to do the webcast. But it was actually kind of fun, I would write something on the action on the track and it just turned into people hating J-Law, loving J-Law and then the people that loved Dungey or hated Dungey. The continent of Australia got into it after that with pulling for Reardon and Reed. It was hilarious what people would come up when they were untethered.

I peeked in and saw that 1, 438 people were asking you “Where’s the webcast?”

Yeah, that was the most popular question by far. People hadn’t realized it was gone yet and that also made me realize just how much people care. With a tear in my eye, I had to tell them there was no webcast.

How’s Holley been since you guys came back? Has he brought his “A” game?

Yeah, he has been bringing it. You know how, if you know your rider well, you can tell that he’s on from the first lap of practice. Well, with Jim I’ve been working with him for so long that I can tell as soon as we go onto the track for track walk if he’s on. If he’s aggressive in tracking down interviews and getting guys then I know he’s on. For example, in San Francisco Andrew Short was standing outside the stadium waiting for track walk when Jim dragged him in to talk to us. Before the track was even open, he was on it! I knew that kind of aggression would result in a great show later.

What’s your thought on the supercross series so far?

I think everybody was afraid at the beginning of the year that it was going to be a runaway, we all saw Bercy and the US Open and feared the worst. It got proven at the first couple of rounds that it wasn’t going to happen but I think recently, people are afraid again of the runaway. It’s not a reflection of James at all, it’s just that people want to see close racing. It’s nothing personal against him but people have guarded fear that he might just make a run of it here. But hey, we’ve already seen early in the year that it wasn’t going to happen and if it does, well we’ve had a month of close racing or so.
When you think about how quickly James made up those points it makes you realize just how long the series is and how many things can go wrong and how there are a lot of races left. We have three months left and anything could happen. The flip side of that is we said the same thing at Glen Helen last year and we absolutely saw the exact same thing all summer, so who knows?

He’s like a dog on a piece of meat, to borrow a Larry Huffman phrase. So now talk about the upcoming GNCC series that kicks off in three weeks. I know you’re a big fan.

Yes, I love GNCC and can’t wait for it to start. I think most people forget that promoting the GNCC series is my real job during the week. For example in the press box in San Fran, I was editing a press release about a GNCC race. As cool as it would be to say that I work at Racer X and then do the Supercross webcast during the week, I have to work for a series that is completely opposite of one another.
The series will be cool this year as the defending champion, David Knight is not doing the whole series this year. I think it’s wide open for the championship and I think it’s been a while since we’ve been able to say that. Everything changes when guys can win and we see that in the 250F class in motocross, the guy who finishes second the year before when a champion moves out is usually the favorite but it doesn’t always work out that way. The guy who finished second last year was Paul Whibley and he’s solid and consistent. He’s also probably the toughest guy out there. You’ve got him and Nathan Kanney and Kurt Caselli on the KTM team, Josh Strang is a young guy Suzuki has that burst out to get third in the series, they also have Charlie Mullins who’s always good. Yamaha brought up a Lites guys named Thad Duvall. He’s a rookie and is kind of like Villopoto where you give him a few races to figure out the 450 and he’ll give everyone a run.
It’s easily eight guys who can win this one and I’d be remiss if I left out a man that you can never, ever count out. Barry Hawk will be there.

What about the facility, it’s a brand new track I understand?

One of the things we’ve tried to do with GNCC over the years is bring it to some facilities that are already there. I know it’s a woods race but we want the spectators to be comfortable. It’s about the fans, this first round is where companies have corporate retreats. There are hotels and restaurants and even a bull fighting ring there. The big companies will send their employees out there to go and bond with each other for a week, they have to all sorts of cowboy stuff. Compared to other off road tracks where you’re in the middle of nowhere or you’re at a moto-x track in the middle of nowhere, this place is somewhere, not nowhere. It’s about two hours from Daytona, so if you’re down for bike week, come check it out.

"Because I Want to Beat the Yankees So Much...I Think"

Reporters Reporting on Nothing.