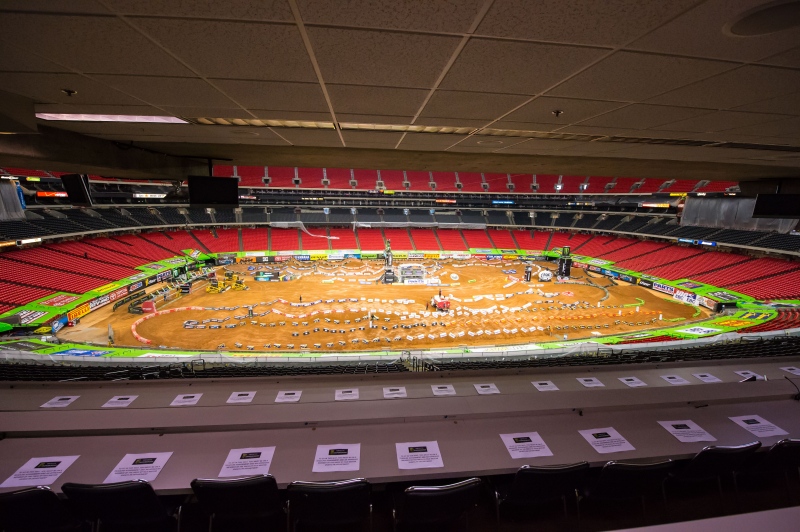 Strong thoughts from a former rider that’s been there, done that

Strong thoughts from a former rider that’s been there, done that

1- It was the same track map as Dallas and ATL 1 for some reason but the track was better than those two because of the ruts and softer soil. What did you think of the track?

I am a fan of generic track layout like this one. You don’t need to re-invent the wheel when you build a track. Long lanes and a bunch of 180-degree turns will do the trick every time. The dirt is a huge factor in supercross. If they had Anaheim dirt in Indianapolis, the track would have been way easier. The ruts made the track technical once again which is far to be a bad thing. Saturday, before I went for a 10-mile bike ride with my kids, I actually watched the last set of practices online. I am always surprised to see professional SX riders in 2015 struggle in rutted set of whoops. Some of them, even factory 450 riders, looked so slow and bad in them. You put a few ruts on a track and that’s it, most of them are lost. I would bet that Lusk or Henry on YZ250 2 stroke from 1997 would have made those guys look silly.

But, it’s understandable. Even in my day, let’s say 2000 to 2004, no one serviced the practice tracks. We were lucky if someone came 3 times in the six-plus months of the SX season. Nowadays, every Monday the factory tracks are all groomed and prepped. And for the richer SX riders with property in FL, TX or wherever, they all have man friends (that they probably pay with energy drinks cans and bags of chips) who prep the track with a bobcat and water with a water truck on a daily basis. Yes, it’s cool to ride on a brand new track all the time but when supercross goes East and gets ruts, the riders are lost. Not because they’re not good. They just aren’t used to it. I remember showing up on Mondays at the Yamaha track filled with dry ruts. It was hard as a bone. We didn’t have an automatic sprinkler system then and I had to manually water the whole track. Most of the time those water pumps wouldn’t start or we broke the cord trying too hard to start them. Not much fun at all. Nowadays, no one picks up a shovel anymore, they just push a button to water the track and then they can’t ride a whoop section with ruts in them.

2- The whoops were big and pretty long, we noticed that you were on Twitter talking about the body type needed to ride whoops. Can you elaborate?

I am just tired of people blaming the length of riders’ legs for sucking in the whoops. That’s all. Short legs in the whoops this, short legs in the whoops that. I am over this stuff. Let’s talk about RC for example. He was (still is) short but was good in the whoops in ‘05-06 and in ‘07. In ‘02-03, he was horrible. It wasn’t his legs. His legs didn’t grow 5 inches from ‘03 to ’05-It was his bike set-up and his technique. His crossbar pad was on the gas cap. His shock had as much stroke as a PW50. And most of the time, he was going thru them in 2nd. Even with Shaquille O’Neal legs you wouldn’t be able to skim whoops like that and this was the main reason Reedy won the last 6 SX races in ‘03. Chad was killing RC in the whoops cause his bike sucked in them. He had no confidence in them and was scared to crash. That’s not how you have to approach whoops.

With the Suzuki in ‘05, he was great in the whoops but his set-up changed and he had Bridgestone’s on his bike. In my opinion, they were a big difference back then. Saturday in Indy, (Jeremy) Martin didn’t crash in the whoops because he has short legs. He crashed because he opened the throttle before he thinks about what he’s going to do in them. When you play Russian roulette in the whoops and think “I’m gonna go them wide open and see what happens”- it never ends well people.

3- Cole Seely had a nice Daytona and even better Indy, he reminds me of Marvin Musquin as a rider and he’s very technical–your thoughts on him?

Yes, Cole is a good rider. He proved it by winning some 250 West races and by making a couple podiums this year in 450. In this sport you need to be noticed. From Indy, I’ve heard and read more about (Weston) Peick’s heat race win than Seely’s second place finish. I had to go check the standings to see what spot he was on. He’s 4th! Half of the time he was in the top 5. That’s pretty good for a first full time season. But, and there’s always a but, he’s a rookie but rides like a veteran. He’s too consistent and too much in his comfort zone. Honda is not expecting him to win. He’s rider #2 so he doesn’t need to be consistent this season. Don’t get me wrong, it’s not a bad thing to stay on his wheels and be consistent. But, I want to see him push himself and get out of his comfort zone. Saturday, I wanted him to just go balls out to win and beat Dungey! Don’t settle for second! I don’t care if you lose the front trying to pass Dungey-at least you’re learning.

If you settle and think about consistency you’ll become the Dungey in the RV days. In my rookie/full time season, I won 4 races out of 16. If I would’ve thought about points and consistency, I would’ve never won Phoenix 2000 and I would’ve missed on one of the best wins of my career. Same in 02, I would’ve never won Indy if I was thinking about being consistent and points. And who would DV be without those 2 wins? An even bigger never was!! Cole, don’t settle. Don’t think championship points this year. You have time for that. Think about being noticed and about winning a Supercross race.

4- Speaking of Marvin, he worked everyone. Again.

He made everyone look pretty bad Saturday. Here, I’ll be that “I told you so” guy. Like I’ve said before over and over, when Marvin rides like Marvin knows, there is no 250 rider on his planet that can beat him in supercross. The kid is too good, too smooth, too fast and the competition is too slow, too weak and not smart enough. At this point, Marvin is faster, stronger and has more technique than the field. It’s normal he’s winning. On the other hand, I am not too sure about what the other guys are doing to question Marvin’s domination. I tweeted on Saturday after Musquin’s win. (I deleted it since): “Kids, park your road bicycle, cancel your gym memberships and get on your dirt bike to acquire the speed/technique needed to perform in Supercross”. You won’t beat Marvin by bicycling or by going to the gym doing some weird Ryno exercise with one foot on a ball the other on a toaster oven and lifting a Caterpillar loader tire. You will beat him by beating your practice tracks’ times by a second.

5- Jeremy Martin didn’t qualify, this has to be something mentally going on with him. He was leading when the red flag came out in the LCQ and then didn’t get the start on the re-start. What’s going on with this DNQ’ing stuff?

Every time a rider has a problem, it’s about “mental”. It was “mental” when Roczen started not performing as well as he did in the beginning of the season. I guess the “mental” is the new “Epstein Barr” or the new “Arm Pump” of the 2010’s. Quit it with that mental crap. As for Jeremy’s performance in Indy, I blame it on stupidity; Jeremy can definitely ride a bike. He showed us that last summer by dominating the nationals. If you read the beginning of the column, Jeremy needs a little bit of Seely’s DNA in his system. I haven’t watched the race again but if I remember right, in the heat race, he goes wide open in the whoops while in the pack, hits the guy in front of him and ate s^&*. He had to ring his bell pretty bad on that one. It didn’t look good when his head hit the starting slope of the bowl turn. Then, he jumped back on the bike and caught up to 10th. On the last lap, he tried to pass the last transfer guy from the outside on a flat corner. Seriously bro? Couldn’t you wait for the next 180-degree turn? 250 guys would kill their parents to make the main from the heat race. What did Jeremy think was gonna happen by going outside on this particular part of the track? He got slightly bumped, hit the tuff blocks and see ya.

In the LCQ, he was gonna make it before they red flagged the race. But you, Jeremy “Effin” Martin, the national champion, riding in a split 250 SX series which has one of the shallowest fields in the history of the class, you gotta to make it! I don’t give a s^&* where you start, you gotta make it! But once again, he goes wide open in the whoops with his eyes closed, the good ole “missing a whoop” happens and that was it for his night. I really believe J-Mart has to become J-(S)Mart(er) in SX. Unplugging your brain in SX is never EVER the right thing to do.