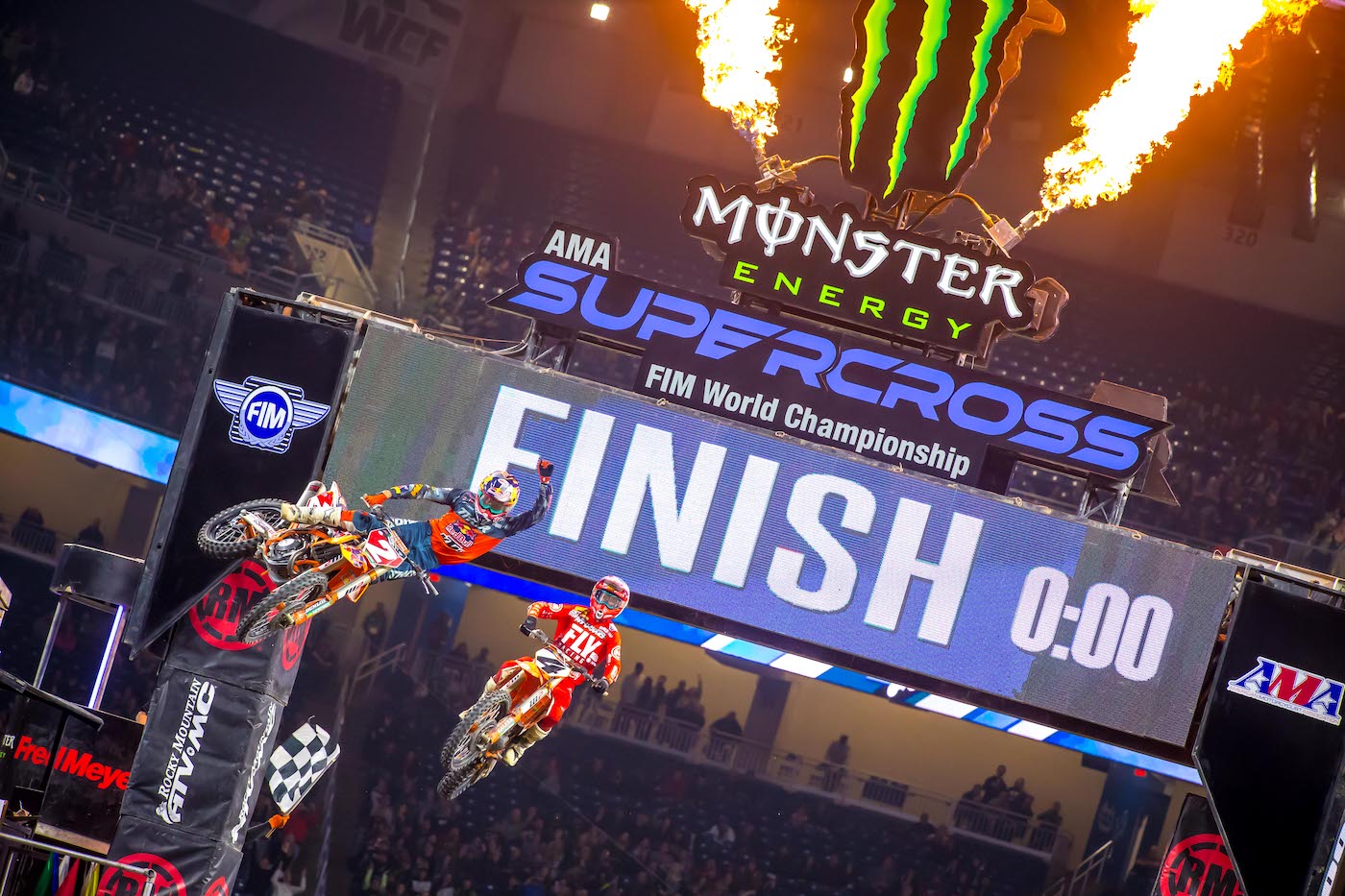 I’m gonna let you in on a little secret. I am not a big fan of attending races in the current High Definition, Live TV world we live in. Listen, I have 4 boys ranging in age from 3 to 13 and my schedule is spent running ragged all over the Great Lakes State for sports, practice and the like. So setting aside a full day to make it out to a race isn’t nearly as easy as it used to be for much of my life and subsequently, I have been to many races in recent years. When I first came on at Pulp, I had merely 1 child and those first few years, made a Vegas Finale, a Monster Cup, Daytona, Indy… the list goes on but life does as well and it has become a common refrain in the group text consisting of myself, Steve, JT, Moz and a guy who’s name rhymes with Spleege.

I was actually going to skip Detroit this year too primarily because the weather sucks and the Pit setup is the utter worst even in decent weather but when weather is crappy, the riders all want to just hang out in their trucks and be left alone (they honestly just want to get their job done every weekend with as little distraction as possible). I had a couple contributing motivational factors which were looking more and more like they’d drag my ass to Detroit this year. One of them is my 10 year old, Hudsen. He kicks my ass in PulpMX Fantasy each week, he incessantly plays career mode on Monster SX2 and texts me how many seconds he beats the stars by each round. He even tells me when he picks up another sponsor due to his prowess in the game (most recently Fly Racing-no shit.) He was adamant that we had to make it to Detroit. He’s also a social butterfly and wanted to roam the pits to lay eyes on as many SX movers and shakers as possible. I’m pretty sure if he had his pick of guardian, if anything happened to his Mom or I, he would choose JT.

The second factor which made the 2019 Detroit decision a slam dunk was the Triple Crown. I’ve been to plenty of SX races and watched plenty on TV but I’ve only watched a Triple crown on TV and I knew I just had to experience one in real life to accurately pin an opinion on the format. Lucky for me Detroit was a Triple Crown, if I had to set aside a weekend to make one in another city, I may not make one till the fruit of my loins all graduated and headed off to college.

In a nutshell, I was amazed by the efficiency and excitement of the Triple Crown format in person. I have heard for years the criticism of “the stars of the show are barely out there” during a typical Supercross event. It honestly always went in one ear and out the other. I was of the mindset that racing is racing and at this level, all the on track action is great entertainment. When the night show started in Detroit this year, it was nonstop excitement of the utmost intensity from the moment the first firework shot off until the final checkered flag waved after the 6th race of the night. The whole “stars of Supercross” thing really is legit! Having the top dogs of each class on track literally every time a gate dropped really was immersively intense and satisfying.

Even better than nonstop action and excitement, the amount of downtime for track maintenance after the first two sets of races was ideal for taking a leak and grabbing a snack or drink. I really gotta hand it to Feld for trying a new format and essentially nailing the timing of the program right away (yes, they modified race length timing this year).

It’s not lost on me that the Detroit track was really good and even the dirt was better then we’ve seen in recent years. This was a surprise considering the frigid temps we’ve had around here in the last month. Hudsen sat between JT and I and was literally on the edge of his seat screaming as Tomac made moves forward. He was pointing out what lines he would take in comparison to the lines the actual racers were taking. This is the world we live in people, my 10 year old who barely has any riding experience but kills in on the XBOX game has REAL WORLD ideas of race craft and lines on the track!!! He spent most of the races leaning over to JT pointing out things he was noticing amongst the many battles for position and asking JT’s thoughts on the action as well.

So now that I’ve established that the Triple Crown is a slam dunk in terms of seat of the pants excitement, I gotta level off my summation by insisting that the amount of Triple Crowns currently in the series is ideal, in my opinion. Supercross has too long a heritage of records and tradition to go and overhaul it with a completely new format. The tried and true Qualify, Heat, LCQ, Main Event format is in the blood and bones of the sport. A few Triple Crowns per season are an adrenaline shot in an already great series. To add more would change the DNA too much. I realize the scope of what I’m saying is a little hypocritical. I would 100% prefer to attend a Triple Crown over a standard formatted Supercross race but in essence that implies that all fans would be better served to attend a Triple Crown over a Standard SX format… and they would but I just see the luster and special “juice” behind the Triple Crown wearing off and leaving us in a worse place as a sport than before, if we were to get a little too “Triple Crown heavy”.

I know we had some incredible racing take place this weekend and I would really have loved to write about that but I felt it was important for me to focus on the Triple Crown twist from an in-seat perspective since I had already explored the subject from the televised aspect.

Bring on Atlanta and the East West Showdown!!