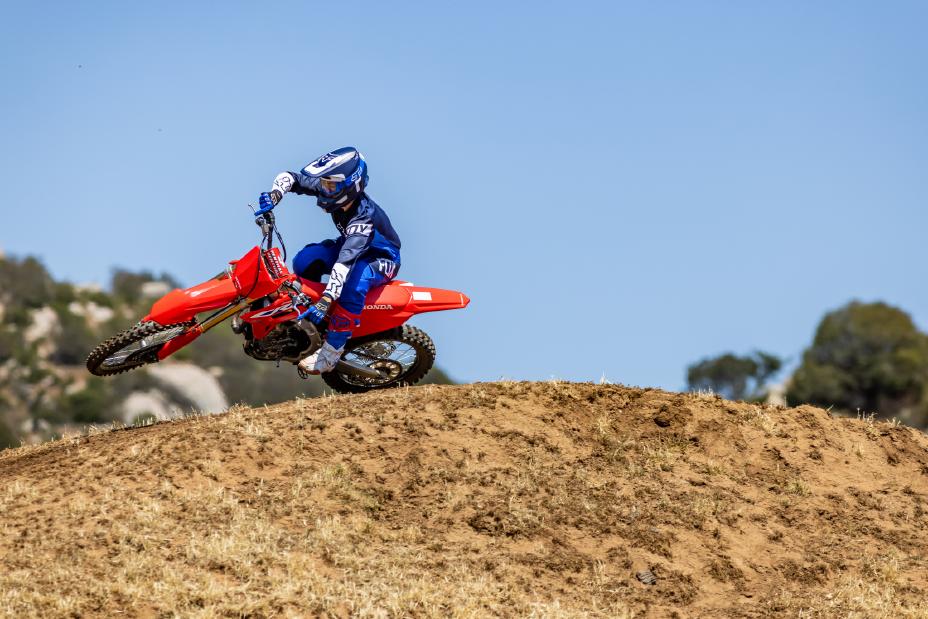 The wait is over! Here is the new 2022 Honda CRF250R. This bike has been through a lot of development and it was fun to be a small part in developing this machine. Look for a first ride impression on the new CRF250R next week right here on Pulpmx.com and Keeferinctesting.com.

The goal for the 2022 CRF250R design team was ambitious, and to achieve the latest racing evolution, Honda’s engineers focused their efforts on making the model quicker, stronger and lighter, by boosting engine performance, increasing toughness and cutting weight.

Significant weight savings was achieved through updates to the chassis, which also boasts improved ergonomics while preserving the handling prowess of its predecessor. That, along with the redesigned exhaust system and additional weight savings on numerous individual components, results in a substantial reduction of 8 pounds for the 2022 CRF250R, to 229 pounds.

Finally, improved durability was accomplished by thoroughly reexamining the engine, its cooling system and the drive components, while notable enhancements were also made to the clutch. 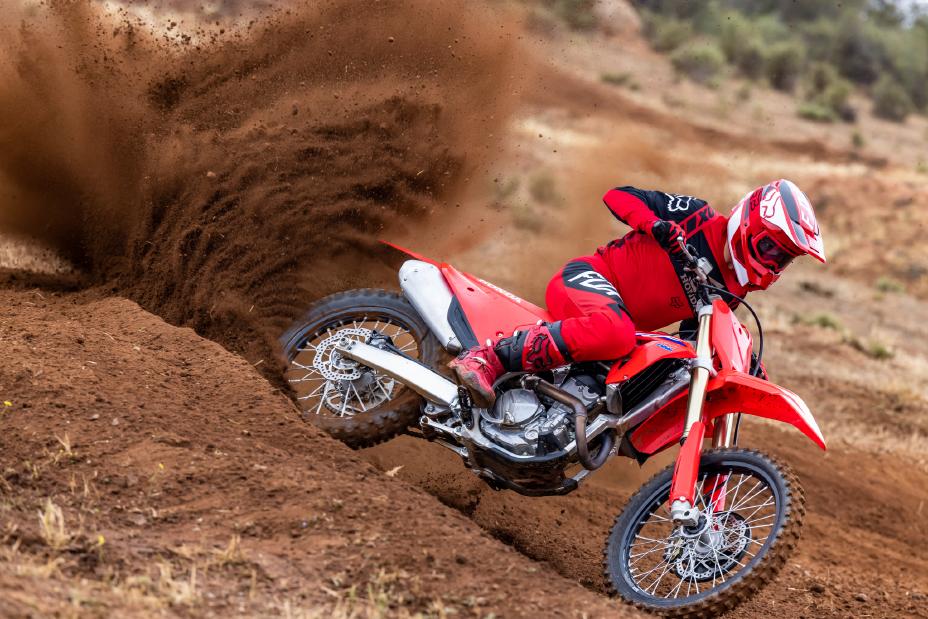 Improvements to the CRF250R’s 249cc liquid-cooled, single-cylinder, double-overhead camshaft four-valve engine design achieve even greater performance and durability. Significantly, low rpm torque is improved through modification of the air intake, revisions to the valve timing and a straightened exhaust port. The changes result in a 20% increase in power at 6,500 rpm, while strong top-end power is retained. 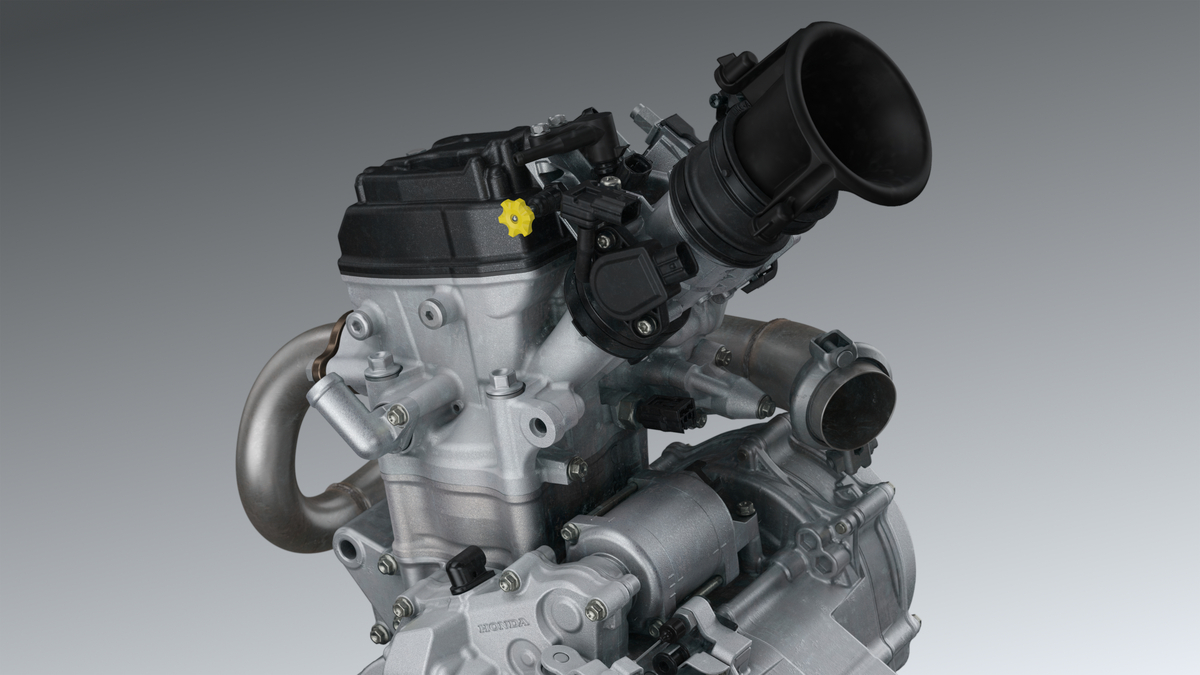 Changing the shape of the airbox has increased its capacity by 78%, primarily on the clean side of the air filter. The fuel injector’s lean angle is increased from 30 to 60 degrees, enabling the spray to reach all the way to the back of the butterfly, and the throttle bore is 44 mm. Together these changes better cool the intake charge, improving air-intake efficiency and torque at low revs. An added benefit of the airbox redesign is improved serviceability of the air filter, with a spring-loaded clip replacing the previous threaded design. 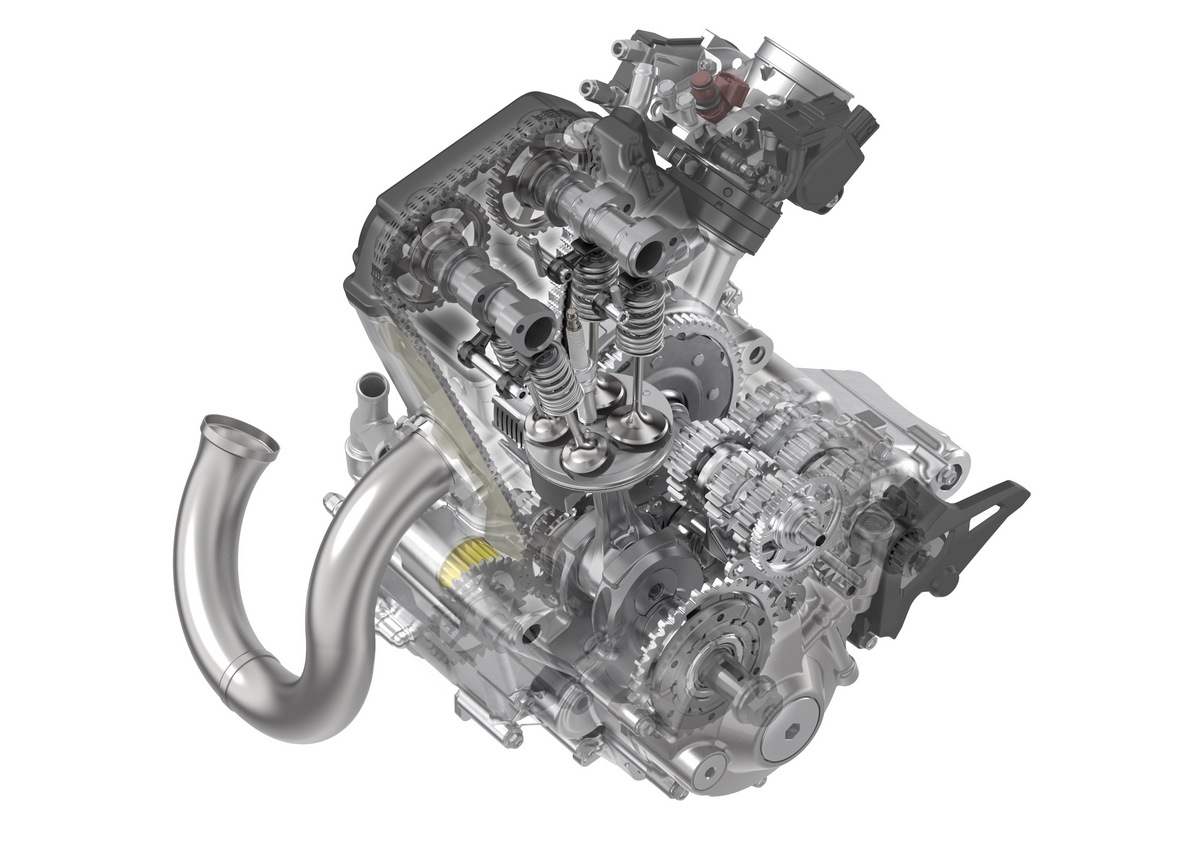 Changes to the four-valve cylinder head are numerous. Titanium 33 mm intake and 26 mm exhaust valves are once again utilized, but now the intake valves feature dual springs (one inside the other) to ensure precise movement at higher revs. The intake camshaft sprocket is now press-fit, which improves valve-timing accuracy while reducing weight.

The camshaft holder has a more rigid design that maintains camshaft-journal roundness, contributing to timing accuracy and reduced friction at higher rpm. Valve action at higher revs has been further improved through redesign of the rocker-arm shaft’s alignment. Also, durability at higher engine speeds was enhanced by revising the camshaft’s oil-supply journal, increasing flow by 80%. Oil volume to the cylinder head has also been increased, through a change to the ratio of the oil pump’s driven gear.

Carrying over from 2021, the bore and stroke are 79.0 mm and 50.9 mm, respectively, and the compression ratio is 13.9:1 To take advantage of the numerous cylinder-head improvements, the shapes of the piston and connecting rod have been modified to improve durability at high revs. Also, the water-pump gear is thicker to increase strength. 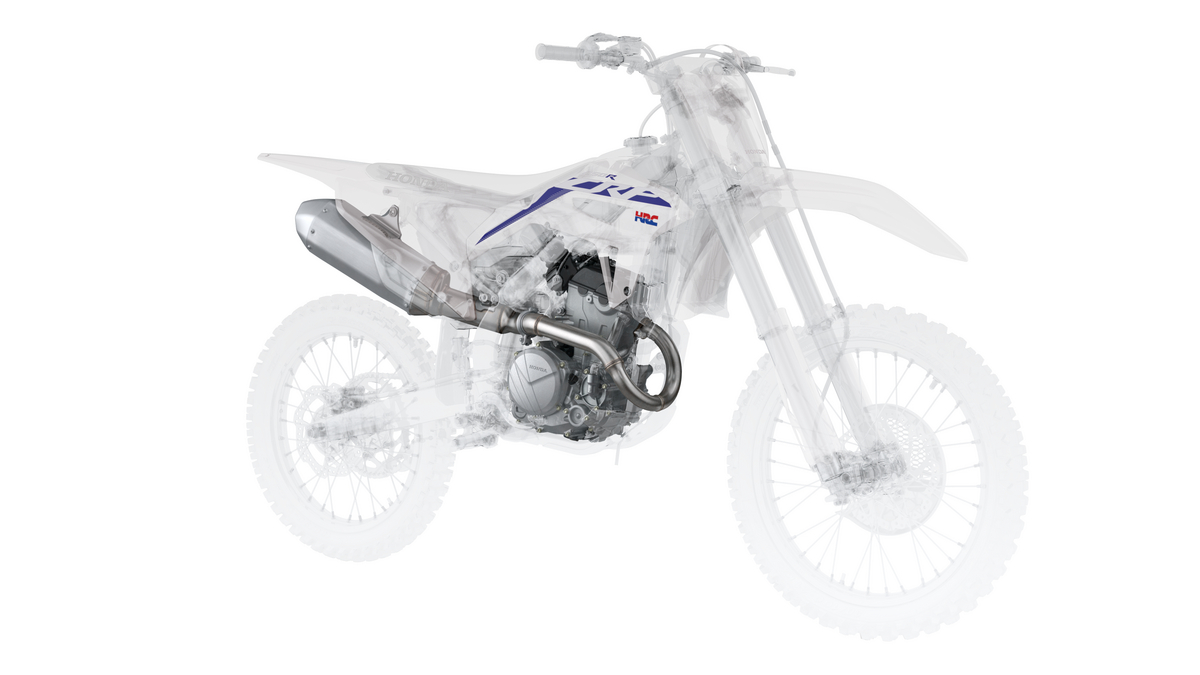 The exhaust system now utilizes a single straight exhaust port, which improves torque and low-rpm drivability. The single muffler has internal baffling that is optimized for torque delivery, and it contributes to a weight reduction from the previous dual-muffler design. The single exhaust header is now routed 74 mm closer to the engine on the right side, while the left header and muffler have been eliminated, resulting in a narrower cross-section and improved rider mobility.

Getting all the power to the rear wheel reliably required a redesign of the clutch assembly. The clutch pack now has nine discs instead of eight, which increases the amount of disc friction material and lowers the load on the individual discs. The clutch basket is made more rigid for added durability, an additional friction spring reduces spring load, and lubrication is optimized to reduce wear. The primary ratio is now lower (3.047 vs. 3.473), and lubrication is optimized, improving clutch endurance by 21%. In addition, clutch-engagement feel is enhanced, and lever pull is 4% lighter.

Inside the five-speed gearbox, changes were made to reduce friction and improve feel when making up- and downshifts between second and third gears—a very common operation on a 250 motocrosser. Only one shift fork is operated to execute this gear-change (rather than two, as before), the countershaft has improved rigidity, and the shift drum is now 17 percent lighter thanks to a larger through hole and reduction of the number of lead grooves, from three to two.

The improvement results in better gear-shifting feel for the rider, and gear ratios are changed to better utilize the newfound engine power in the low and middle rpm ranges, with first and third being useable across broader speed ranges. 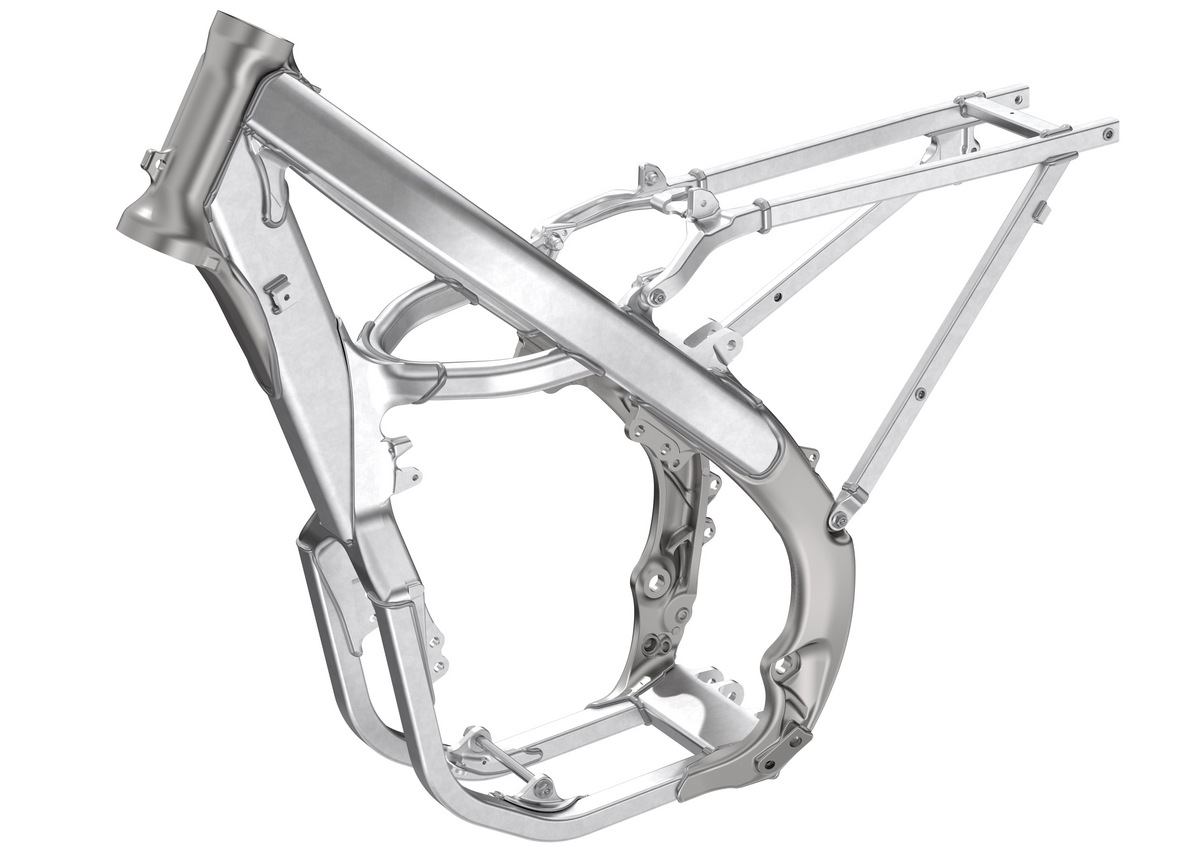 For Honda’s engineers, improving upon the previous CRF250R generation’s exemplary handling was a significant task, as the frame was already known for delivering reliable tracking, precise turning, exemplary straight-line stability and overall rideability. The goals were to ensure that the engine’s newfound power would not upset these traits, and to reduce the overall weight of the machine to facilitate increased maneuverability.

The aluminum frame is 1.5 pounds lighter for 2022, drawing heavily from the CRF450R. Updates include widely curved main spars with smaller cross-sections, plus optimized rib placement in the backs of the pivot plates. Longitudinal rigidity is maintained for straight-line stability, while lateral rigidity is reduced by 20 percent to enhance handling feel when cornering.

The subframe features a simplified design that enabled the elimination of a separate seat support, achieving a weight reduction of .7 pounds.

The coil-spring Showa fork is a 49 mm fully adjustable leading-axle, inverted telescopic design with 12.2 inches of stroke. The upper and lower triple clamps have been redesigned, with rigidity rebalanced via updated reinforcement ribs, delivering increased flex for improved handling and feel through a corner. Traction and bump-impact performance are better as well, and the bike has an agile corner approach, with sharp handling characteristics.

The Pro-Link® rear-suspension system has a revised ratio and uses a Showa shock absorber whose shape has been adapted to work with the new frame, with adjusters moved from the left side to the right. Rear travel is 12.3 inches. An ultra-light steel shock spring contributes to the shock being .24 pounds lighter than last year’s component. The swingarm is also narrower, providing increased clearance in ruts, with rebalanced rigidity tuned to match the frame and improve rear traction and cornering.

The 2022 CRF250R comes with Pirelli Scorpion MX32 tires, which are ideal for soft and intermediate terrain, and which offer an appropriate amount of sidewall flex for a 250 motocrosser.

Rider-active design is a key feature of the 2022 CRF250R, which inherits many of the design features of the CRF450R. The right and left side panels are 20 mm and 50 mm more inboard, respectively, for a 70 mm narrower cross section at the rear, and the rear portion of the seat is 10 mm lower for a flatter layout. The radiator shroud-side panel junction is smoother as well. These user-friendly ergonomic changes permit the rider to more easily adjust body position when cornering, accelerating, jumping and braking.

The radiator shrouds are new, and each is produced in a single piece instead of two separate parts. Cooling the 2022 CRF250R engine is crucial to maintaining its increased performance and overall durability. Computational Fluid Dynamics (CFD) were used to design air-outlet vents in the shrouds, and the radiator grills were redesigned, optimizing the number of fins, as well as their angle. The radiators’ area of heat radiation was also increased by 6%.

Whereas the seat was previously installed by sliding it forward onto the subframe and then securing it at the rear, the new seat base has rearward-facing tongues and front-located mounting tabs. This arrangement eases installation, and acceleration forces keep the seat securely in place. The 1.7-gallon fuel tank is once again made of lightweight titanium but has a new design, and the plastic tank cover has been eliminated.

Engineers looked for and capitalized on every opportunity to cut weight for improved handling. For example, only eight fasteners are used to secure all of the main bodywork components—both radiator shrouds, both side plates and the seat—instead of 12 as before. In addition, all of the bolts for the main bodywork parts now have 8 mm heads, simplifying maintenance.

As before, the Renthal® Fatbar® handlebar is held by a clamp that can be turned 180º; because the clamp itself has two mounting locations, there are four possible mounting positions for the handlebar, through a range of 26 mm. 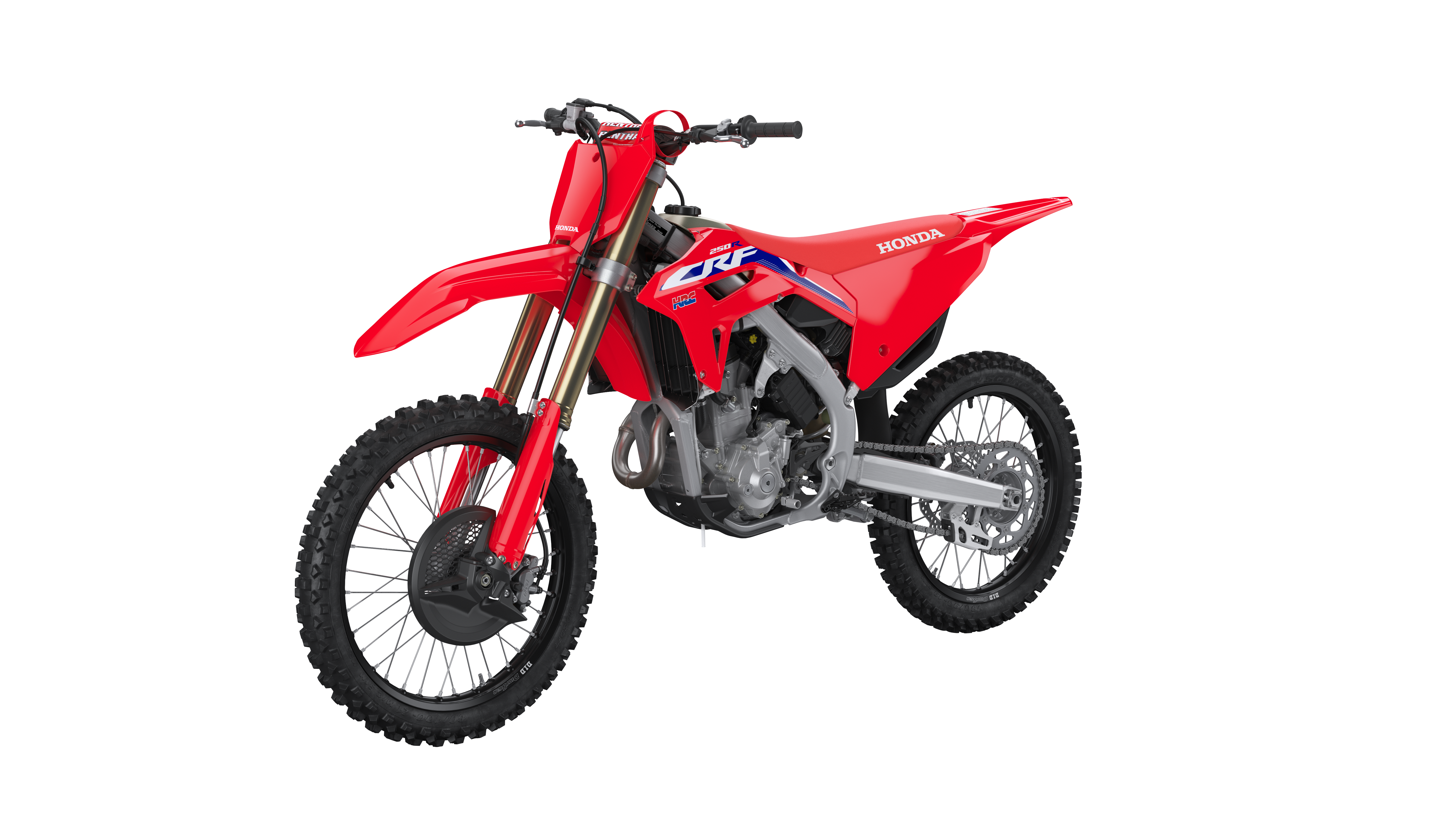 Honda has once again redefined the 250cc four-stroke motocross competition segment. The 2022 CRF250R showcases the most usable engine performance ever offered in the best handling chassis in its class. Riders of all experience levels will benefit from the machine’s excellent acceleration and sharp cornering, while also appreciating Honda’s legendary durability, quality and reliability.