1986 was a great year for Honda. In racing they took home the National Motocross Championship in every class from 125 to 500. In Supercross, they swept the podium with Rick Johnson, David Bailey and Johnny O’Mara capturing the top three spots. In motocross magazines CR’s claimed the top spots in every class. In 1986, if you were on anything else but a Honda, you were at a real disadvantage.

The 1986 model year marked the first time in four years that Honda had not totally redesigned its big bore CR. The ’83 CR480R had been a fantastic bike, loved by the public and press alike. The ’84 CR500R had been just the opposite, frustrating riders with its violent power and unfortunate habit of blowing up. The ’85 CR had introduced liquid cooling, and gone a long way toward domesticating the notoriously unruly CR500R. Gone were the days of impossible jetting and questionable reliability. The ’85 CR500R introduced a whole new era of serious Honda Open class racers. For ’86, Honda took its very good ’85 CR500R and with a little refinement, made it worlds better.

Starting with the ’84 model, Honda CR500R’s were all mid-range monsters. The ’84 model was so violent that most people found the bike nearly impossible to handle. The ’85 model had brought with it better carburation and a slightly less terrifying power delivery. For ’86, Honda’s goal had been to make the rocket ship CR even easier to ride, without losing its horsepower advantage. This would become a common theme every year on the big bore Hondas. By 1992 the CR500R would be a pussy cat compared to the burly, hairy chested mid-eighties models. The manufacturers were quickly learning that there was only so much power the average person could handle, and these two stroke monsters were pushing that envelope to the very limits. Ride-ability was the new buzz word in the 500 class.

In 1986, the Honda engineers changed the piston, head and ignition timing in order to smooth out the  ’85 CR’s massive hit. The result was a slightly less sudden low-to-mid  transition and decent over-rev. The CR was still not as easy to ride as the KIPS-equipped ’86 KX500, but at least it was capable of being ridden by normal human beings. The excellent shifting five speed transmission offered a gear for every situation and the sturdy clutch was more than up to handling the Honda’s massive power. The ’86 Honda was at its best when short shifted and torqued around the track. If you made the best use of its ample torque curve, you could set blistering laps on the 500 Honda.

The 1986 CRs were the first production machines to receive Showa’s new “cartridge” fork damping system.  Cartridge forks had been a staple on works racers for years, and in ’86, the technology finally made its way to the general public. The cartridge system allowed for more precise damping control and a wider range of tuning than traditional damper rod designs. In ’86 that put Honda miles ahead of its competition in the fork wars. Out back, the story was not as good. The Pro-Link rear shock was slightly harsh and not nearly as refined as the Showa forks.

The handling of the ’86 CR500R was typical mid-eighties Honda, with excellent turning habits and an aversion to fast rough straights. Few things in the world are as terrifying as a 60hp 230 pound rocket trying to shake you off its back at 50mph. Headshake on these bikes was no joke, if it started oscillating that front end lock to lock, the only thing to do was say a prayer and hold on for dear life. Riding these bikes was a scare-a-minute affair in more ways than one.

Fit and finish on the ’86 CR500R was excellent and light years better than on the competition. All the parts fit excellently and nothing broke or fell off unexpectedly. Some features, like a fully removable sub frame, would not make their way onto the competition for another five years.  The only complaint with the fit and feel of the CR was its very bulky layout. The CR500R suffered from a giant bulging gas tank which made moving around on the bike difficult. The porky body work made the bike feel heavier than its 223 pounds would suggest. 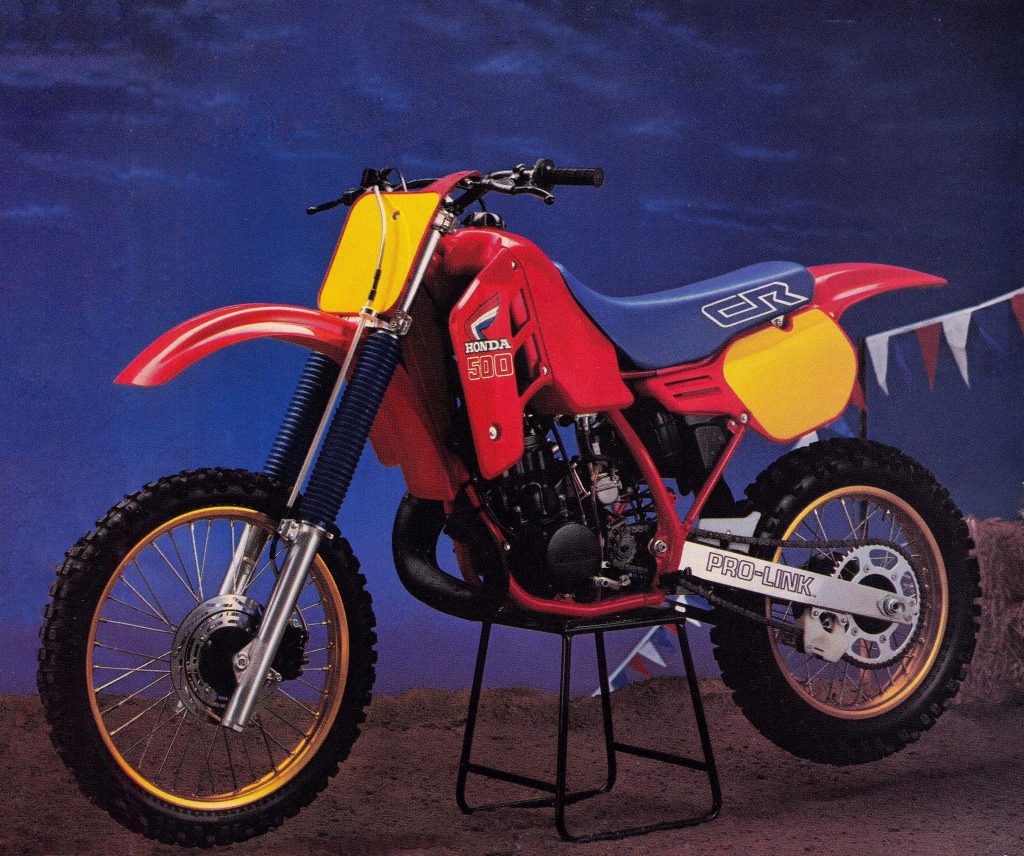 A great bike with a mediocre shock, the 1986 CR500R was a incredibly effective, but not for the faint of heart. Photo Credit: Honda

With its burly powerband and big bike feel, the CR500 was certainly no bike for a beginner. This was a serious motocross weapon that would punish the careless. If you were the kind of guy that absolutely refused to get pulled up that big hill though, this was the bike for you. If you were man enough, the ‘86 CR500R was ready. In 1986, thrill riders did not get any better than this.