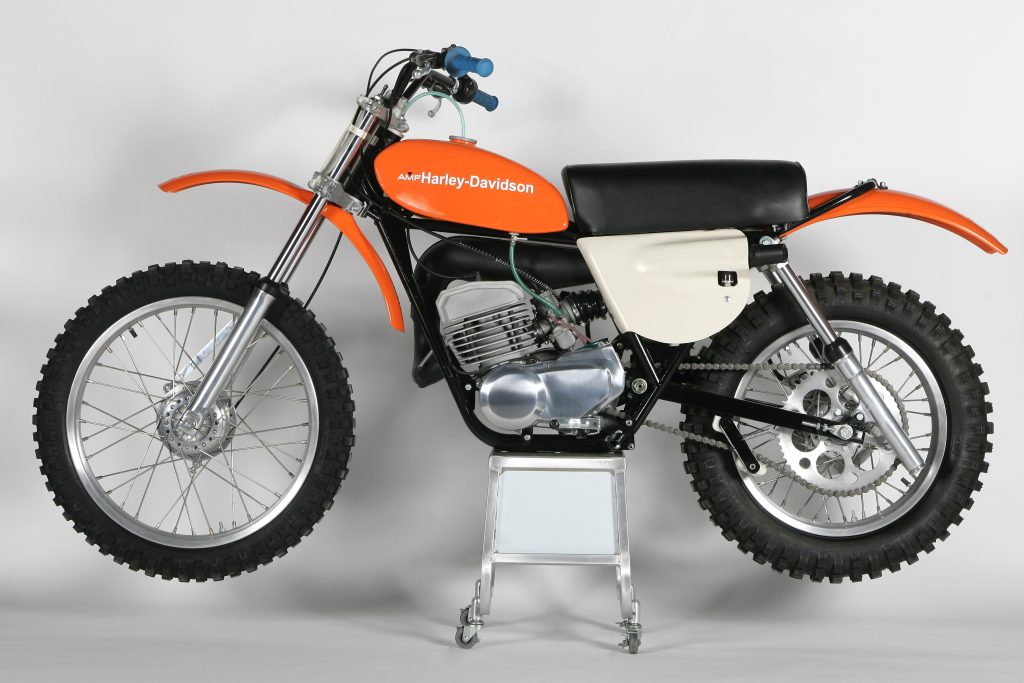 In 1975 AMF/Harley-Davidson took the plunge into the motocross market with a limited run of MX-250 machines. The interesting bike was a combination of American, Italian, German and Japanese parts that did not mesh well together. Harley would end up only producing 65 of these oddball machines. Photo Credit: Stephan LeGrand

When one thinks of motocross, Harley-Davidson is certainly not the first name that comes to mind. After all, the Milwaukee based motorcycle giant made its reputation on big V-twin cruisers, not dirt bikes. In reality, Harley-Davidson has put their name on all manner of two-wheeled machines over the years. Everything from small two-stroke runabouts to road racers have worn the black and orange shield at one time or another. One of these lesser-known endeavors was Harley’s brief flirtation with the motocross market. For a few turbulent years in the mid-seventies, the company known for chrome and ape hangers got its hands dirty and took on the established off-road manufacturers at their own game. 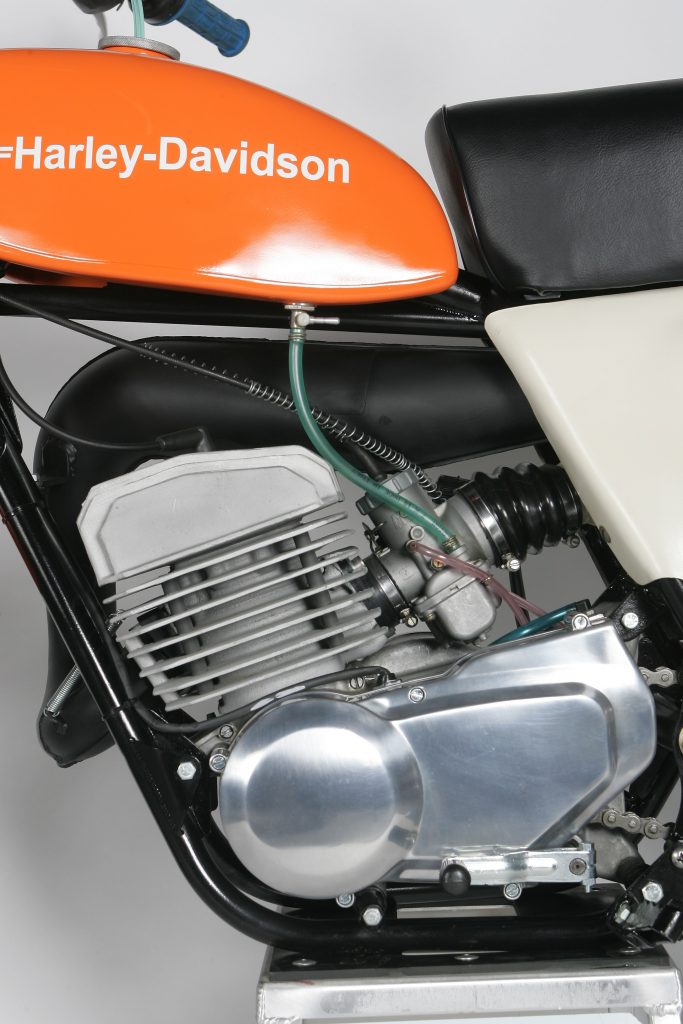 Harley had partnered with the Italian firm Aeronatica-Macchi in the early sixties to produce small two-stroke singles for them to sell here and abroad.  Harley used one of these Italian Aermacchi motors to power their new MX-250. The mellow low-to-mid power delivery was unimpressive and better suited to an enduro bike than a motocross racer. Photo Credit: Stephan LeGrand

William Harley and Arthur Davidson originally founded Harley-Davidson in 1903 in Milwaukee, Wisconsin.  Their first product was a small single cylinder machine of Davidson’s design that was closer to a moped than a motorcycle.  From there, Harley-Davidson would continue to build more and more sophisticated designs, culminating in 1909 with their first V-twin motorcycle. Harley was in the right place at the right time, as America caught motorized fever in the early twentieth century. If it had a motor, people wanted it. With the economy booming in the 1920s, countless small manufacturers sprung up to meet the incredible demand for gas-powered machines of every type. Unfortunately, as the roaring twenties gave way to the turbulent thirties, all of that would change literally overnight. Of the dozens of early manufacturers that had sprung up, only Harley and Indian would survive the incredibly lean years of the Great Depression. As one of only two remaining American motorcycle manufacturers, Harley was in a perfect position to take advantage of the post-war boom years to come. 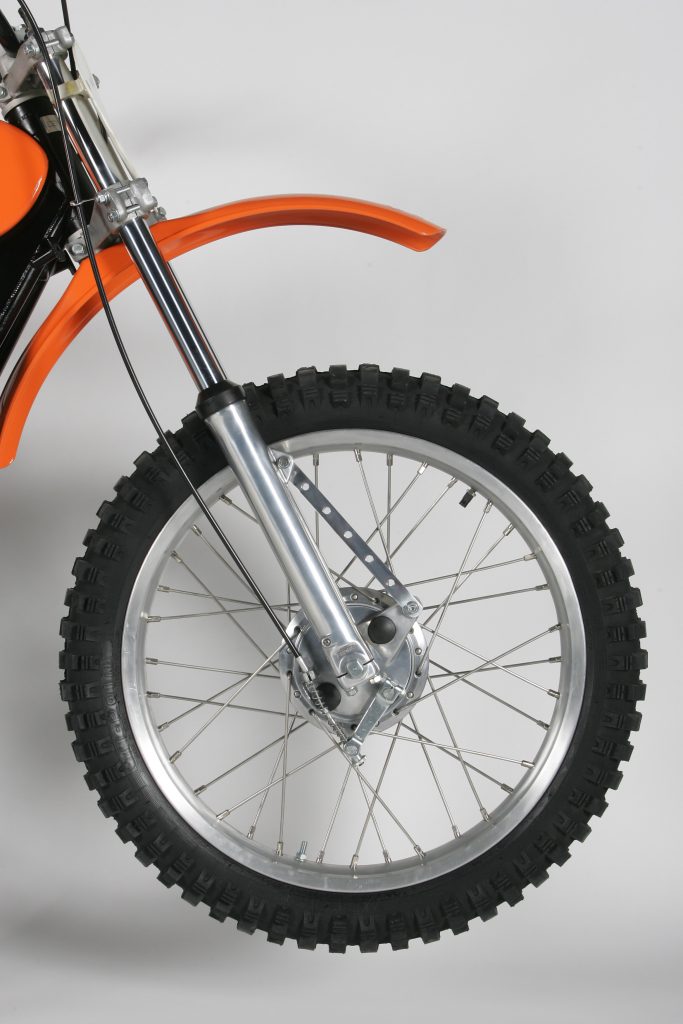 The front end of the MX-250 was less interesting than the bizarre rear arrangement. Up front, the MX-250 used a set of off-the-shelf Showa forks. The front wheel was a stock Yamaha front hub mated to Sun rims and Buchanan spokes. Suspension performance was considered good for the time.

In 1960 Harley would purchase a half interest in the Italian firm Aeronatica-Macchi and form Aermacchi Harley–Davidson. The new division would produce small single cylinder motorcycles for the European and American market. The Aremacchi-Harley pairing would see the production of several small two-stroke singles throughout the sixties. The Italian made bikes wore the Harley shield but in reality, bore little resemblance to the big four-strokes people associated with the brand. 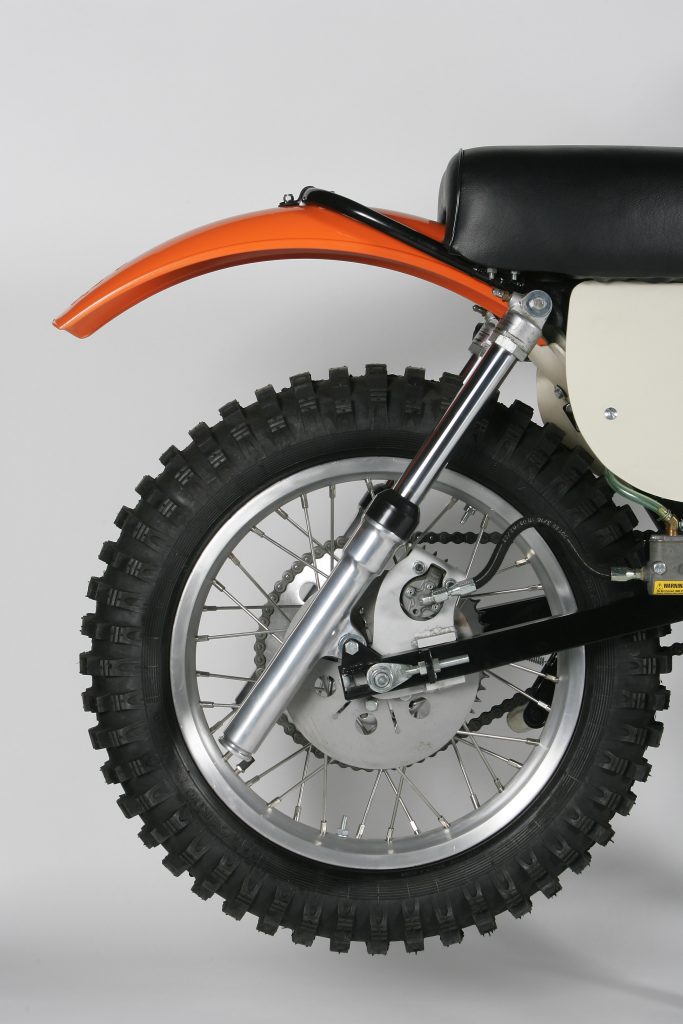 Here is where things got weird on the MX-250. Harley made the interesting decision to fit the back of the bike with a set of Kayaba forks. Aside from looking absolutely ridiculous, they actually worked pretty decently. The rear brake on the Harley was an Airheart disc mated to an H&H caliper. The Airheart disc brake set up proved unreliable and some riders actually removed it entirely and replaced it with a rear drum brake.

In 1969, American Machine and Foundry (AMF) bought Harley- Davidson, streamlined production and slashed the workforce. Labor strikes resulted from the workforce cuts, damaging the brand’s reputation and interrupting production. With falling sales and terrible quality, AMF/ Harley–Davidson became synonymous with poor performance and even poorer reliability during these difficult years. With sales on the decline and consumer confidence at an all-time low, Harley began looking at other ways to expand their business portfolio. 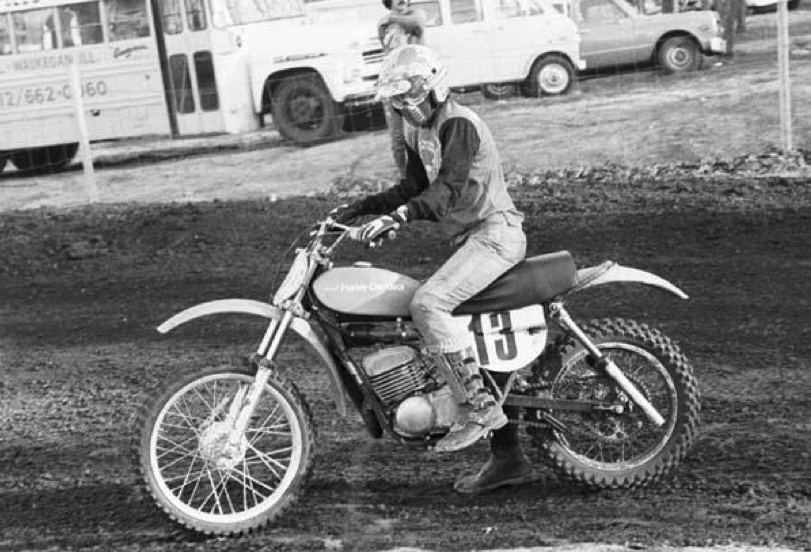 Harley made a halfhearted attempt at racing motocross with the MX-250, but met with little success. Its only significant victory would be at the hands of Bruce Ogilvie in the Baja 500 desert race. At the end of ’75 Harley would scrap the design altogether and go back to the drawing board.

AMF/Harley was already producing a few small dirt bikes in the early seventies through the Aermacchi division. These small 100cc machines were primarily play bikes, designed for riding around in the desert. As the sport of motocross exploded in the early seventies, AMF decided that Harley should investigate making their own machine to compete in that potentially lucrative market. The result was one of the most memorable bikes of the decade, the 1975 MX-250. 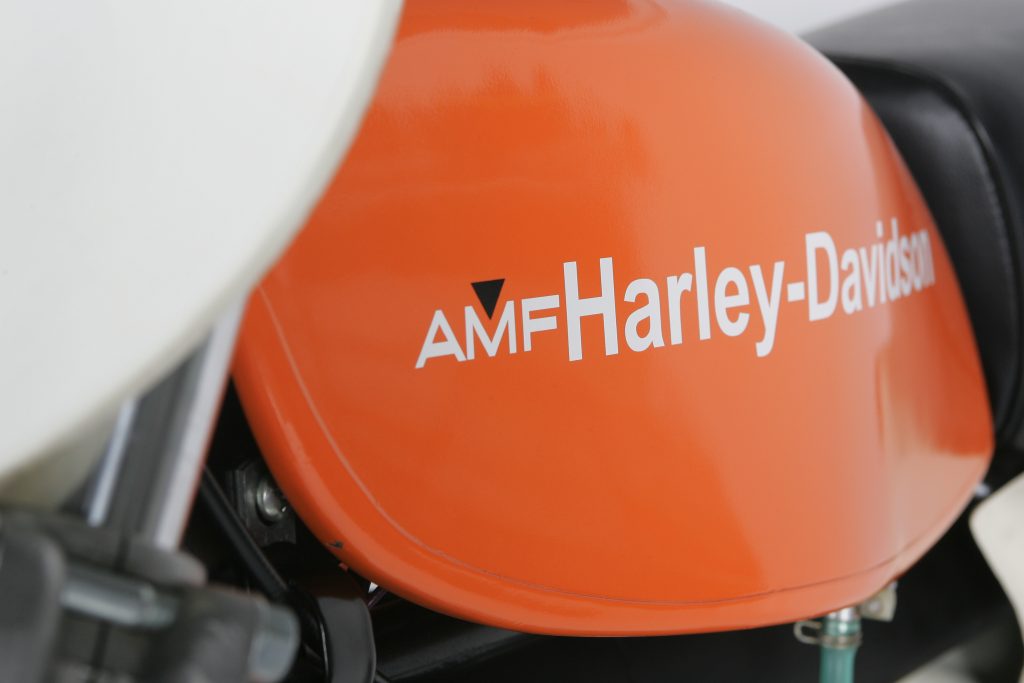 The AMF/ Harley-Davidson marriage would prove a rocky one for the Milwaukee-based motorcycle giant. The AMF era was plagued with poor sales and shoddy quality. The seventies would nearly see the end of the motorcycling icon as mountains of red ink threatened to bring down the once-proud brand. In 1981 Willie G. Davidson would lead a turnaround at Harley, buying it back from AMF and bringing the former glory back to the faltering brand. Photo Credit: Stephan LeGrand

The MX-250 was a prototype machine made to gauge the practicality of AMF/Harley building a serious run of production motocrossers. It used a 242cc Aermacchi two-stroke single mated to a chromoly steel frame. The thing that really made this bike famous (or maybe infamous) was the odd suspension Harley chose for the machine. Harley decided to use front forks for both the front and rear suspension on the MX-250. Even stranger, they were not even from the same manufacturer. Showa produced the front forks, while Kayaba built the rears. It was an odd arrangement in every possible way. At the time there may have been some logic to the crazy rear fork idea. Motocross suspension was still in its infancy in the seventies and it was generally felt that fork performance was markedly superior to shock performance at the time. I suppose it seemed like a logical (if ridiculous looking) idea to just bolt the best components on both ends of the bike. 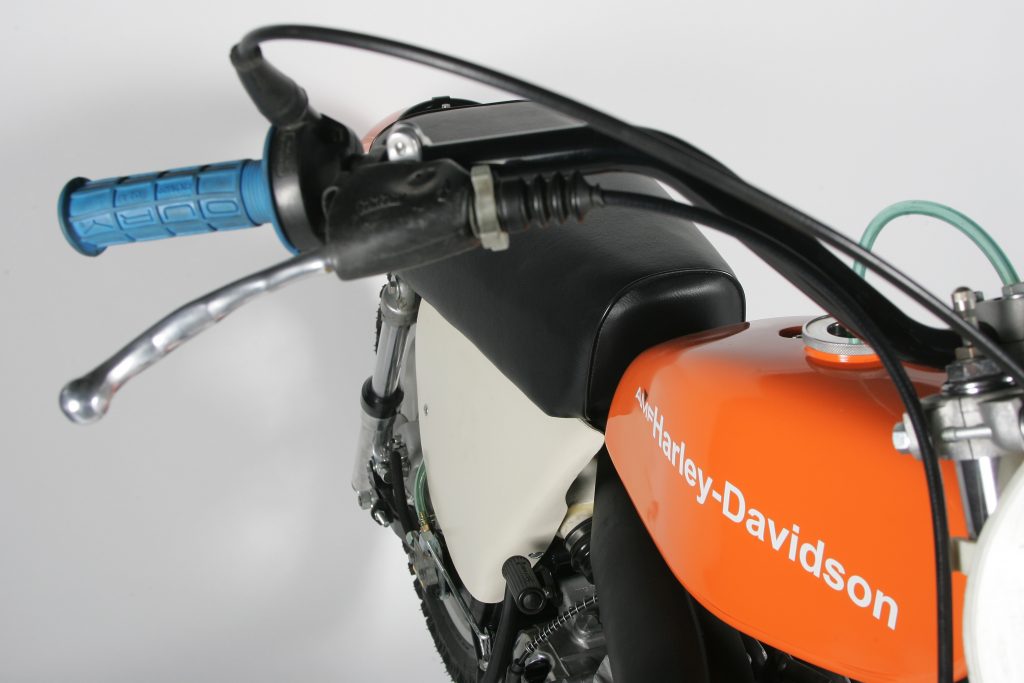 Oury grips and absurdly large Magura hand controls were standard on the MX-250. If you could not palm a basketball it was nearly impossible to reach the German-made controls. Photo Credit: Stephan LeGrand

Another interesting feature of the MX-250 was the use of a rear disc brake. This was over a decade before this feature would make its way to motocross machines from Japan.  The Airheart disc brake was unremarkable in performance and some people even removed it in favor of a Yamaha drum brake set up. The front wheel was a stock Yamaha front hub mated to Sun rims and Buchanan spokes.  Magura provided the controls and K&N provided the handlebars. With American, German, Japanese and Italian parts, it really was a bit of a Frankenstein machine.

The performance of the bike was probably better than you would expect to look at the bike. The weird rear fork set up actually worked pretty well and did a decent job of smoothing out the bumps.  The front Showa forks were likewise considered surprisingly good (by seventies standards of courses, which is not saying much). The Aeremacchi power plant was underpowered and better suited to an enduro bike, but it did prove reliable enough to take Bruce Ogilvie to the ’75 Baja 500 win on the MX-250. It would prove to be the only success the MX-250 would enjoy. 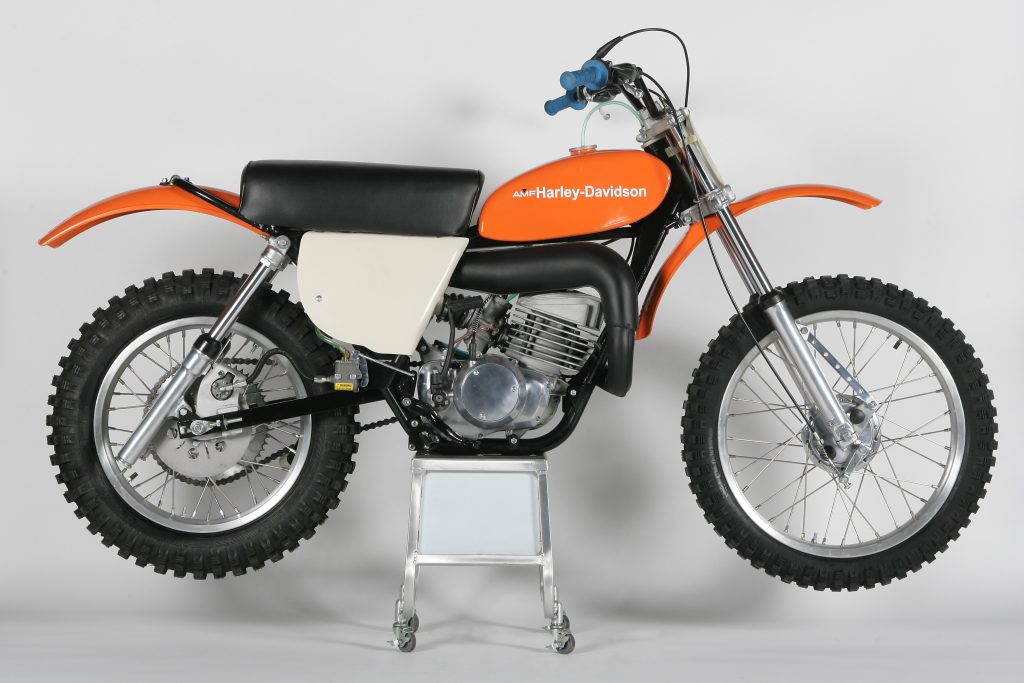 The original ’75 MX-250 cost $1375 and was only available at a few select Harley dealers. With only 65 of these bikes ever being produced pristine examples like this one are very rare. One in this condition could cost you over $15,000 to buy today. Photo Credit: Stephan LeGrand

The AMF/ Harley-Davidson motocross experiment would be scrapped at the end of 1975 with only 65 of the machines ever having been produced. The underpowered engine and unproven chassis proved uncompetitive at motocross and AMF decided it would be best to go back to the drawing board with the project. They would come back in 1978 with a much-improved machine and several big-name riders to showcase the new bike. That effort would only last a short time as well, as Harley would give up on the off-road market for good in 1979. The 1975 MX-250 will forever remain an interesting footnote to the rocky AMF-Harley marriage of the seventies.

Tell Us a Story, Larry Brooks