This week’s selection from Greg Primm’s Classic Steel is one of Suzuki’s best twin-shock Open bikes, the 1979 RM400. 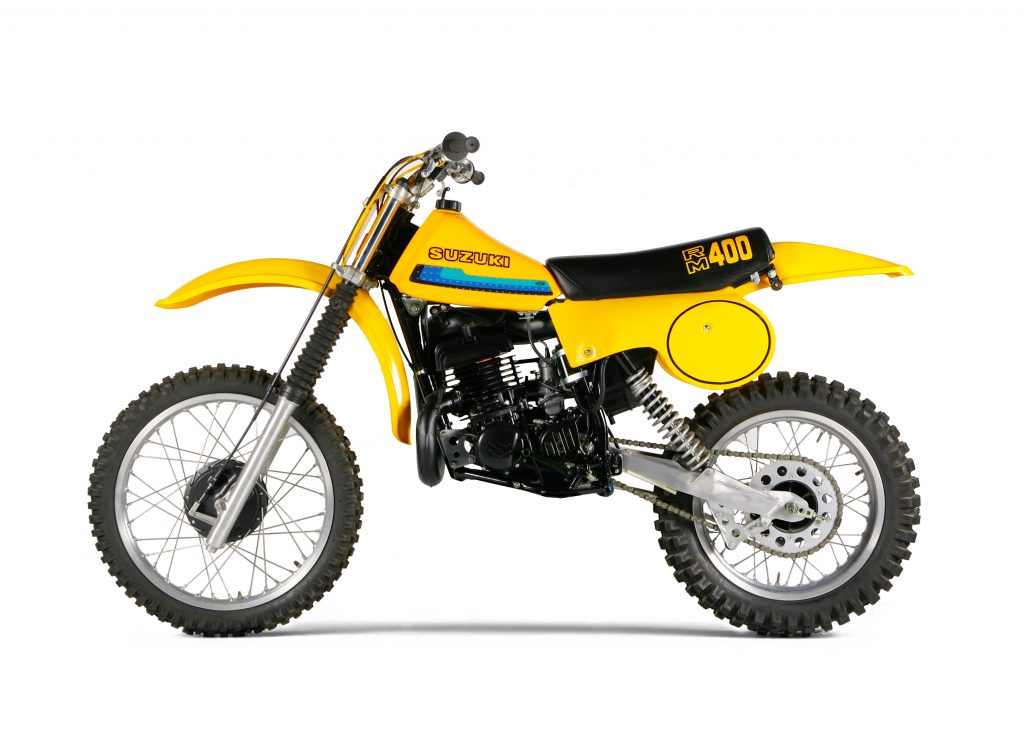 The ’79 RM400 was an all-new design and a significant upgrade from the ’78. Virtually everything from the old bike had been tweaked or modified to improve performance. Cosmetically the radically laid down shocks, new tank, and rearward mounted numberplates made the new RM look years removed from its older brother. Even today these RM’s are considered excellent vintage racers. Photo Credit: Stephan LeGrand

In 1979 there was really only one class the Japanese had yet to conquer. The Open class was still the stronghold of the Swedish and Teutonic brands at the time as the Japanese focused their efforts on the smaller bike classes. In Europe, the Open class was the only class. In Japan, the most important class was the one that sold the most bikes, and that was not the big-bores. The Japanese Open class bikes were still thought of as less expensive alternatives to the superior European offerings.  While the late seventies RM’s may not have been up to besting the all-powerful Maico’s of the time, taken on their own, they were still very good bikes. 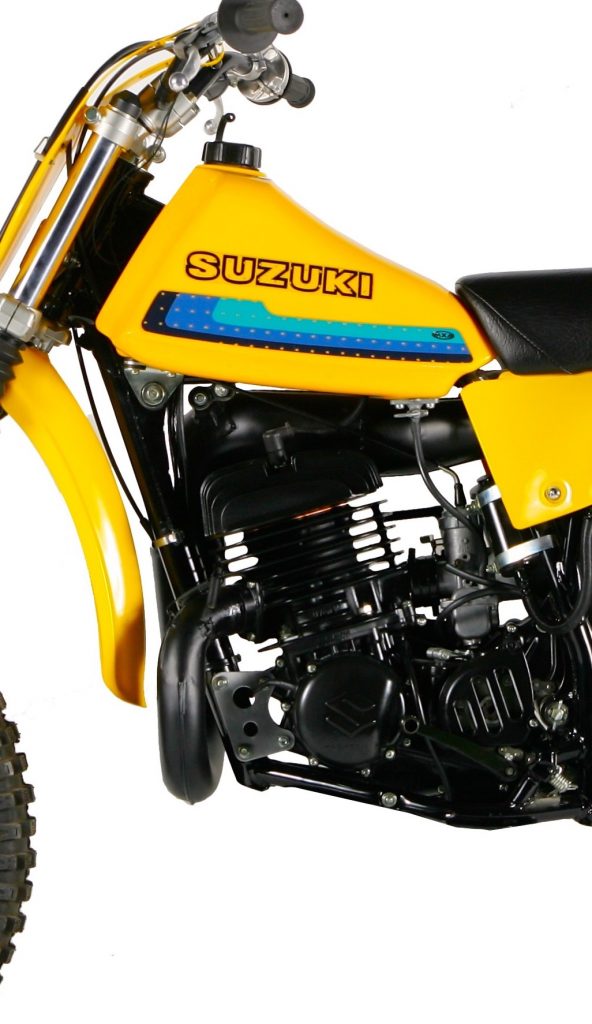 Suzuki aimed high with the RM400’s motor but ended up with a weak imitation of a Maico mill. The 417cc engine made all its power in the lower regions and felt like it was choked off on the top end. The smooth shifting transmission could be fragile at times as well, but overall, these were good easy-to-ride motors. Photo Credit: Stephan LeGrand

The ’79 RM400-N was a significant redesign from the ‘78 RM400-C model it replaced. The frame was all new and featured a steeper steering-head angle and shorter wheelbase for improved turning. The all-new extruded box-section aluminum swingarm positioned the shocks further back to change the lever ratio and increase rear travel. The motor on the “N” model received a bump in displacement to 417cc’s in an attempt to mimic the tractor like power of the Maico.  Like the chassis, the bodywork was all new on the ’79 RM, with a large plastic tank and longer side panels needed to meet the new FIM regulations in Europe. About the only things that were not improved on the ’79 RM’s were the front and rear fenders, which were some of the goofiest looking pieces of plastic ever hung on a motorcycle.

The RM400N was far from the most powerful bike in the Open class in ’79. The 417cc mill was pleasant and easy-to-ride, with a mellow power delivery. Low-end torque was plentiful, but above the midrange, there was very little pull from the air-cooled motor. In spite of its mellow output, the RM mill was well liked by many riders. It featured a smooth shifting five-speed transmission and was far easier to manage than many other big-bore bruisers.

In the late seventies, “long-travel” was the hot buzzword. Every year, bike manufacturers tried to outdo each other with more and more suspension action. The RM’s were right at the forefront of this suspension revolution with each year bringing more and more travel to their designs. By 1979, the bike manufacturers were finally realizing that more travel was not necessarily the answer. The rush to quantity over quality led to problems, as chassis of the day were not up to the stresses of the stretched out suspension. Handling suffered as overstressed frames flexed and twisted under the added strain. As a result, components like swingarms went from small spindly pieces of steel to giant hunks of aluminum. Everything from the wheels to the frame had to be beefed up to accommodate the high flying antics these machines were becoming capable of.

The suspension on the RM400N was some of the best on the track in 1979. It featured a set of 38mm air adjustable Kayaba forks in front delivering just less than eleven inches of travel. The forks performance could be adjusted through air pressure and oil selection. The action was decidedly plush, with soft springs and light damping. Overall performance was very good for the average rider but too soft for faster experts.  The rear suspension was handled by a set of Kayaba shocks bolted to a massive extruded aluminum swingarm. The shocks delivered just under eleven inches of travel to the rear wheel. The Kayaba shocks were considered advanced for the time actually allowing for external damping adjustment. Limited though it was, the two position rebound damping adjustment was better than most stock bikes of the era. Much like the forks, the shocks provided a soft ride and light damping. The main complaint with the shocks had to do with fading, as they tended to overheat after about fifteen minutes and deteriorate in performance. Overall, the suspension on the ’79 RM was considered excellent for the time and adequate anyone below the expert level.

Along with the excellent suspension, Suzuki had blessed the RM-N with a superior handling chassis. The beefy  (for the time) 38mm forks and sturdy swingarm gave the RM a planted feel in corners and over jumps. Although the bike was no lightweight at 240 pounds it felt lighter than it was and gave the bike a surefooted nature in the rough. The bike was easy to move around on with smooth bodywork and a tank that narrowed at the seat junction. About the only problem riders had with the RM was the extremely tall seat height of thirty-eight inches. Without a linkage, the nearly one foot of suspension travel required very long shocks and as a result, the RM sat very high in the rear. If you were under 5’9” just climbing on the RM could be a chore.

Suzuki was a real powerhouse in the late seventies pumping out some of the best machines of the decade. Bikes like the RM370 and RM400 have become Icons of the dual shock era. The ’79 RM400 has stood the test of time, its easy to ride motor and precise handling still make it an excellent vintage racer to this day. The fact that so many people still race and ride these bikes even now, speaks volumes about just how good they really were.

Bikes of My Life- by Aaron Hansel